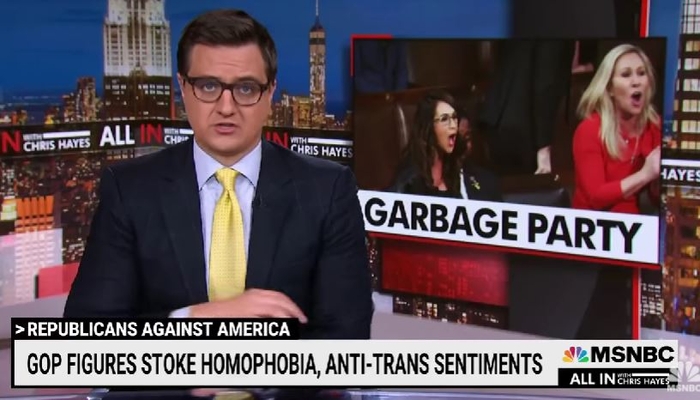 The New York Times consistently portrays Republicans as marauding culture war aggressors, even when it’s the hard-left that fires the opening shots. In “Republicans See an Opening as Identity Issues Divide Americans,” Katie Glueck and Patricia Mazzei presented Republicans as callous and divisive for pushing legislation in various states that: halt the use of puberty blockers and hormone treatment for “transgender” children; forbid classroom lessons on gender identity; insist student athletes compete in accordance with their biological sex.

“Red States Push L.G.B.T.Q. Restrictions as Education Battles Intensify — With an eye toward parents’ anxiety, Republicans have put forward a wave of laws on classroom instruction, youth sports and health care. Some of the young people at the center feel isolated.”

Never mind the left-wing radicalism of treating self-diagnosed children with hormone treatments or teaching white students to feel personal guilt about their “privilege.” At the Times, identity extremism only emerges from the right.

Last April, a high school senior in Utah named Gabriela Merida joined a student town hall hosted by her governor. She introduced herself, noted the pronouns she used and broached the subject of mental health challenges facing young L.G.B.T.Q. people. How, she asked, did the state plan to help constituencies like hers?

….His mention of his pronouns has become fodder for right-wing derision and misleading video clips. And deep-red Utah is now at the center of a new fight that is reordering the nation’s politics, roiling its education system — and, for some Americans, shaking their sense of belonging as a midterm election year unfolds.

Once again, the Times portrayed a defensive maneuver by Republicans — protecting girl sports from being corrupted and dominated by male competitors — as a cynical, mean-spirited attack.

The reporters subtly suggested that Republicans fighting back against identify politics is a divisive issue, and that Democrats are all for identity politics while even Republicans are split.

From state capitals to schools, Americans are increasingly at odds over issues of identity and language, who can play on which youth sports teams and what can and cannot be said in classrooms. These issues are pitting governors against their state legislatures, business leaders against conservative activists and, in some places, Republicans against one another, while Democrats calibrate their responses and some transgender people feel increasingly isolated.

To Democrats and some Republicans, the legislative pushes on these issues amount to an effort to inflame the G.O.P. base at all costs — even when it means children and their families see their governments singling them out.

The story characterized polling suggesting low support for “transgender girls” participating with “other girls” in high school sports as something Republicans are cynically taking advantage of.

In all that turmoil, Republicans see a political opening.

Lawmakers in states beyond Florida have recently signaled intentions to emulate the state’s new law. Opponents warn that parts of the law may have a chilling effect on teachers and on students of all ages, including some who have relied on schools as a safe place to talk about personal issues.

Again, the paper got it backwards by portraying Republicans as aggressors in a culture war actually launched by the left.

….with a solidly right-leaning Supreme Court at their backs, many Republicans are going on offense on cultural issues like L.G.B.T.Q. rights.