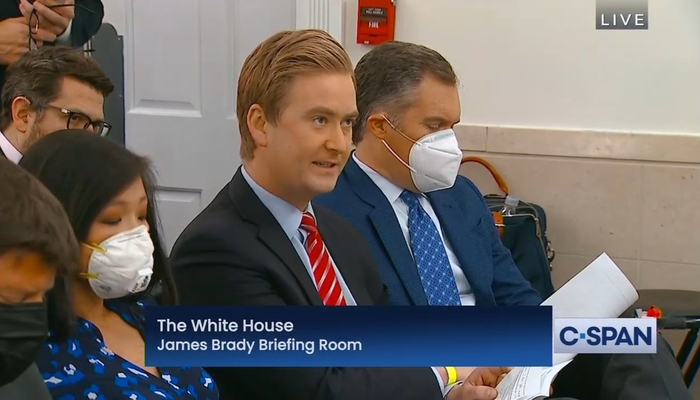 Given the busy news week, we wanted on Monday morning to recap the best and the worst from Thursday and Friday’s episodes of The Psaki Show and hone in on Fox’s Peter Doocy sparring with Press Secretary Jen Psaki over COVID cases around the President and Vice President and then free cellphones for illegal immigrants.

In contrast, other reporters came at Psaki from the left, expressing fear of the virus, regardless of how many shots one might have had.

Doocy began his Thursday questioning with this zinger about Speaker Nancy Pelosi’s (D-CA) positive COVID test following a White House event: “How can you guys say that President Biden was not a close contact with Speaker Pelosi when there is video of the Speaker kissing him?”

Psaki insisted the Center for Disease Control’s “definition of it is 15 minutes of contact within a set period of time within six feet” and they “did not meet that bar.” Thankfully Doocy pressed on the insanity of this and whether a rash of cases among key officials could be “a national security problem.”

Psaki noted the importance of boosters and the availability of working from home, so Doocy closed the circle with a question about Friday’s celebration of incoming Justice Ketanji Brown Jackson before moving on to immigration and what’s expected to be an explosion of people at the border.

He also had Psaki weigh in on a proposal from Governor Greg Abbott (R-TX) to send illegals to Washington D.C. (click “expand”):

DOOCY: And then, on a different topic, when Title 42 expires next month, what is the plan for the 18,000 migrants a day that are going to cross?  Do you want them to get jobs here?  Is there something else that you want these 18,000 a day to be doing?

PSAKI: I don’t know where you’re basing your specific numbers on, Peter.  But what I would tell you —

DOOCY: Eighteen thousand — I’ve got it right here: “Earlier this week, the Department gave reporters an estimate that up to 18,000 migrants could be apprehended at the border each day if Title 42 were to be lifted.” That’s from ABC News.

PSAKI: Well, “up to.” And we’ll see what happens. And, obviously, we’re taking steps to convey that this is not the time to come. Individuals who come to the border — this is what would happen: CBP and ICE would work together to ensure that anyone who enters the country without authorization is put into immigration proceedings as quickly as possible. CBP has been working with ICE to ensure individuals awaiting processing in the interior of the country monitor und- — would be monitored under the Alternatives to Detention program. We know that, to date, nearly 80 percent of non-citizens waiting in the interior under prosecut- — prosecutorial discretion have either received a notice to appear or are still within their window to report.  That is what would happen. In addition, I would note the Department of Homeland Security also put together a preparedness plan to continue addressing irregular migration that involves surging personnel and resources to the border, improving border processing, implementing mitigation measures, and working with other countries in the hemisphere to manage migration. Those are all steps that they’re working to do in order to implement when we get to that point in time.

DOOCY: And the last one on this: Now that the Texas governor is saying that he’s going to start busing border crossers to Washington, D.C., when they get here, are you guys going to help them find a place to stay and something for them to do?

PSAKI: Well, I’m not aware of what authority the governor would be doing that under.  I think it’s pretty clear this is a publicity stunt. His own office admits that a migrant would need to voluntarily be transported and that he can’t compel them to. Because again, enforcement of our country’s immigration laws lies with the federal government, not a state.

PSAKI: Well, listen, I don’t know, but I know that the governor of Texas or any state does not have the legal authority to compel anyone to get on a bus.

At the other end of the spectrum, Reuters’s Alex Alper pressed Psaki to have the administration ponder “any stricter measures to keep [Biden] safe” for the time being such as “more mask-wearing, fewer big venue events, more outdoor events.”

NBC’s Peter Alexander would follow on that theme while The Wall Street Journal’s Alex Leary actually wondered what was Biden’s “human-level response” to Pelosi and Cabinet officials testing positive for the virus.

As we would see on Friday with Politico’s Alex Thompson (in the case of Harris given positive tests on her staff), Bloomberg’s Josh Wingrove read aloud CDC guidance on what makes someone a close contact as a way of pointing out the White House’s change in posture (after over a year of extreme caution).

Going to Friday, Doocy similarly began with a bang, sarcastically asking whether there’s “a carve-out in CDC regulations for COVID for the Vice President.”

Psaki invited him to “[t]ell me more” as “I’m sure this is going somewhere” even though she wasn’t entirely certain of what he had for her “on a Friday.”

Take note below of how Psaki had the gall to note Harris was emotional as she had important business to attend to, which led Doocy to question whether this was a case of “rules for thee but not for VP” (click “expand”):

DOOCY: The CDC says, for people exposed to COVID, up to date on their COVID-19 vaccinations: Do not go to places where you are unable to wear a well-fitting mask. So why is she here at the White House today giving the new Supreme Court justice a big hug with no mask?

PSAKI: You mean when she gave her a ma- — a hug outside?

PSAKI: She was outside.

DOOCY: Does the CDC say that people who are close contact can give people hugs outside?

PSAKI: We know, Peter, that outside it is — it is — you are — you can benefit significantly being outside. That’s why we have — we had the event outside today. I will tell you that the Vice President has been wearing a mask inside. When there was a private greet, they were all wearing masks, before they went out —

DOOCY: We saw she was wearing a mask yesterday at the Senate.

PSAKI: She was playing an important role in confirming or overseeing the confirmation of the first Black woman to the Supreme Court. The vast majority, as was on camera, Peter —

DOOCY: Is there a public health carve-out for that?

PSAKI: — as was on camera. Let me finish my answer here. Because Fox and other — I don’t know actually that Fox carried it, but others did — saw that she was socially distanced from people for the vast, vast majority of her time overseeing that confirmation yesterday.

DOOCY: So this is not a case of rules for thee but not for VP?

PSAKI: In fact, the Vice President wore a mask inside today when she was both with the President, with her staff, other people. She was outside at the event. She was socially distanced for 99.9 percent of the event today and she had an emotional moment, which is understandable.

On immigration, Doocy wanted to know whether free smartphones could be given “to U.S. citizens that way them” for free with “a free monthly plan” seeing as how they’re being doled out to illegal immigrants.

Psaki wasn’t having it, asking how instead should they be tracked and also inviting Doocy to provide “an alternative suggestion.” Doocy was a good sport, stating he “unfortunately, [has] not been asked to make…policy.”

And, ABC’s Mary Bruce came off of her syrupy accolades for Jackson to hit Team Biden from the left with forever pandemic rhetoric, suggesting the White House “try and keep him safe” by “cutting down some of the big indoor events or scaling back any — or changing, sort of, your tactic with some of these events.”

To see the relevant briefing transcripts, click here (for April 7, including a question from the Daily Mail’s Rob Crilly about Psaki’s long-rumored departure) and here (for April 8).

What Kind of Person…
‘Shockingly predatory’ Ghislaine Maxwell should serve at least 30 years in prison, prosecutors say
New Model Penal Code Is Setback for Victims of Sex Crimes
I Guess It’s Okay to Question the Legitimacy of Our Institutions Now
Roe Falls: The End of the Beginning