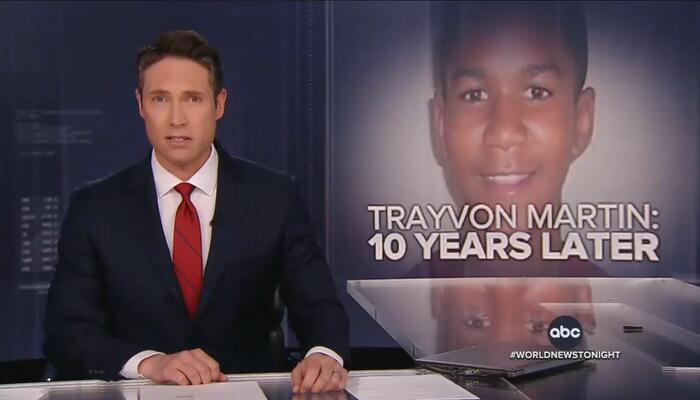 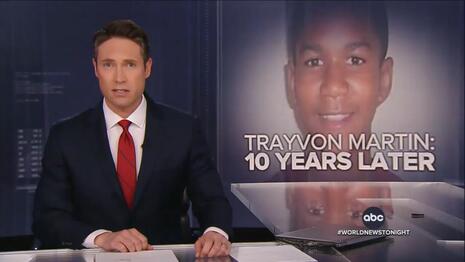 As ABC and CBS ran reports commemorating the 10th anniversary of black Florida teen Trayvon Martin being shot to death by George Zimmerman, both networks misinformed their viewers, and ABC even imitated the same smear that NBC News was forced to apologize for 10 years ago.

As both networks incorrectly implicated Florida’s “stand your ground” law for making it easier for Zimmerman to avoid punishment, ABC News correspondent Zachary Kiesch used edited audio of Zimmerman’s 911 call, making it sound like the neighborhood watch volunteer had told the dispatcher that Martin seemed suspicious in part because he was black.

Both networks also failed to inform viewers that Zimmerman received serious injuries, including a broken nose, that bolstered his claims of being attacked by Martin, leading him to shoot the teen to save his own life.

After informing viewers that Zimmernan was acquitted, he then lamented the decision and played the doctored audio that made him sound racist:

ZACHARY KIESCH: The jury with six white women called the killing justified, and critics said it said more about us than it did the man who pulled the trigger.

GEORGE ZIMMERMAN (audio from 911 call): This guy looks like he’s up to no good — he looks black — a dark hoodie.

The full audio reveals that, after Zimmerman’s claim that Martin looks like he is “up to no good,” the dispatcher asked, “This guy, is he white, black, or Hispanic?” leading to the response that Martin “looks black.”

Kiesch concluded the report by alluding to the police-involved shootings of black suspects that the media have been fixated on for the last eight years: ”Trayvon Martin’s death marked the beginning, not the end, of what has been a drumbeat of unarmed black Americans who have been killed.”

CBS News put out a one-hour special which features reporting by Gayle King, Mark Strassmann, Jericka Duncan, and others. King was seen portraying the failure to convict Zimmerman as a failure as she spoke with former Attorney General Eric Holder about the case.

And, as Strassmann recounted the shooting, he did not explicitly mention Zimmerman’s injuries, such as the broken nose, and instead just briefly included images of what he looked like without elaboration.

And, even though ABC News legal analyst Dan Abrams pointed out back in 2014 that “stand your ground” was not utilized in the Zimmerman case, the report made a big deal out of blaming the law for the failure to convict him.

Duncan was seen interviewing liberal activist and rapper Fat Joe, who blamed the law for making it easy for Zimmerman to avoid punishment.

On ABC’s World News Tonight, their shoddy reporting was sponsored in part by Allstate. Their contact information is linked.

VALERIE JARRETT, FORMER OBAMA ADVISOR: This was just a young man walking down the street. He wasn’t arguing with George Zimmerman. He wasn’t doing anything.

CARMEN PEREZ, LIBERAL ACTIVIST: The way in which George Zimmerman has been able to get away with this is not justice for anyone.

MICHAEL ERIC DYSON, GEORGETOWN: Trayvon, Emmet Till, and Ahmaud Arbery — black people doing ordinary things — and being attacked for them and losing their lives for no good reason.

ERIC HOLDER, FORMER ATTORNEY GENERAL; Well, I think our criminal justice system is not yet as finely tuned to these kinds of matters as it ought to be.

KING: Eric Holder was the first black attorney general serving under the first black President of the United States. He was in office in 2012 when Trayvon Martin was killed.

HOLDER (dated 2009): We, average Americans, simply do not talk enough with each other about things racial.

SYBRINA FULTON, MOTHER OF TRAYVON MARTIN: Trayvon’s only crime against him was the color of his skin.

ZIMMERMAN (audio from 911 recording): This guy looks like he’s up to no good.

STRASSMANN: That guy was 17-year-old Trayvon Martin heading back from a convenience store, doing nothing wrong.

911 DISPATCHER (audio from 911 recording) Are you following him?

STRASSMANN: But George Zimmerman — that neighborhood watch volunteer — confronted Martin anyway. He showed police later how they fought on the ground.

ZIMMERMAN (from 2012): He just kept slamming and slamming.

STRASSMANN: And, losing the fight, he fatally shot the teenager.

STRASSMANN: You can draw a through line from Trayvon Martin to where we are today.

BENJAMIN CRUMP, CIVIL RIGHTS ATTORNEY: I don’t think since Emmett Till has the killing of a young black person in America had such a profound impact.

FAT JOE, RAPPER: Here’s a kid who’s listening to me saying positive stuff, but yet still goes out and he’s killed for no reason.

UNIDENTIFIED JUROR: We the jury finds George Zimmerman, the defendant, not guilty.

JERICKA DUNCAN: When you think about the moment we learned that George Zimmerman was acquitted?

FAT JOE: I knew he wouldn’t be going to jail, you know, I never thought it. So I know the stand your ground. It’s crazy because the law says if you’re frightened — somebody scared you — you can kill them legally. That’s the law.

CARMEN PEREZ, LIBERAL ACTIVIST: The way in which George Zimmerman has been able to get away with this is not justice for anyone — certainly not for the family but for the country. You could still see something like that happen, and there’s no accountability.

DUNCAN: You believe there could be another Trayvon Martin, even today, 10 years later?

PEREZ: I do. I think if we don’t change these policies — if we don’t reexamine what public safety looks like, we’re going to continue to see this.

PHILLIP AGNEW, LIBERAL ACTIVIST: We understand “stand your ground” still exists, so the fight is still a very long way from being won.

WHIT JOHNSON: We turn now to a somber anniversary — 10 years since the death of Trayvon Martin — a 17-year-old black teen fatally shot on his way back from a convenience store. The killing inspiring a movement, drawing worldwide attention to issues of race and justice. Here’s ABC’s Zachary Kiesch.

ZACHARY KIESCH: Just 17 years old when his life was taken, Trayvon Martin’s promise was never fully utilized, but a seed was planted the day he died.

BARACK OBAMA, FORMER PRESIDENT: My hope is, is that we look back on what happened with Trayvon and be able to say that was the start of America looking inward in fits and starts coming to terms with — with what has always been our original sin.

SYBRINA FULTON, MOTHER OF TRAYVON MARTIN: Not even the death of my son will separate me from the love of my son.

DAVID MUIR, ABC NEWS HOST (from 2013): Zimmerman has been found not guilty in the murder of Trayvon Martin.

FULTON: My heart is broken, but it breaks even more to know that we have not gotten justice yet.

KIESCH: The jury with six white women called the killing justified, and critics said it said more about us than it did the man who pulled the trigger.

GEORGE ZIMMERMAN (audio from 911 call): This guy looks like he’s up to no good — he looks black — a dark hoodie.

KIESCH: Trayvon’s death marked an inflection point for our country’s first black President and for everyday people trying to divorce themselves from America’s racist past and present. … People who saw themselves in the young man. In some ways, Trayvon’s death marked the beginning, not the end, of what has been a drumbeat of unarmed black Americans who have been killed. Florida’s stand your ground laws — which were really central to this case — now exist in 38 states. In those states, according to one analysis, when a white shooter kills a black victim, those shootings are deemed justifiable five times more than when the roles are reversed. Whit?

WHIT JOHNSON: Zachary Kiesch, our thanks to you tonight.

CDC Uses Elmo to Convince Children to Get Vaccinated For Covid (VIDEO)
Stars Janelle Monae and Taraji Henson hit out at Supreme Court during BET awards
Squires: Liberals hate Clarence Thomas because he represents the dignity and self-respect they try to steal from black America
NY Times Hates Court’s EPA Ruling: Can USA Be a ‘Civilized Society’ Without Regulations?
Pro-Lifers on Offense