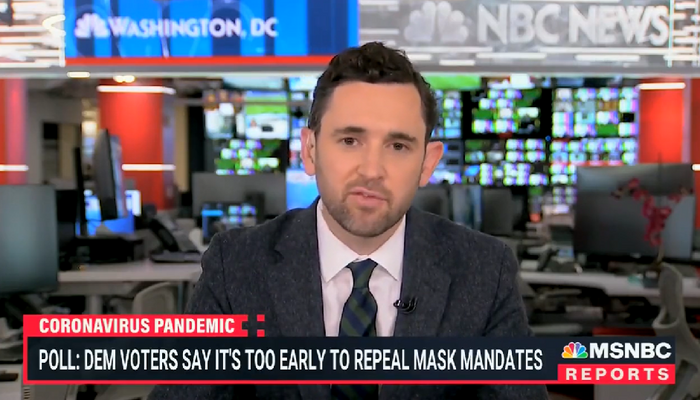 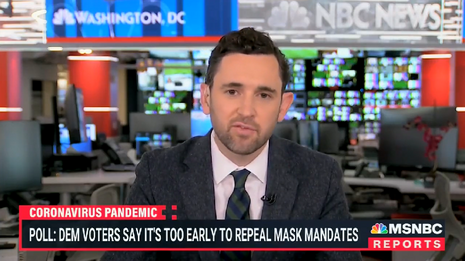 That was the big refrain from Democrats for the past couple of years. However, as we approach the midterms that assertion has changed to “We must follow the political science.” Why? Because recent elections, especially in Virginia and New Jersey, have taught many Democrat politicians that continuing mask mandates is toxic at the polls. Therefore there is now a push among Democrat governors to ease or eliminate such mask mandates.

However, there is a problem. While satisfying the general population, it seems to alienate hard core liberals who not only cling to wearing masks as a sense of identity but also gives them a sense of power by forcing others to do the same.

It is no surprise that conservative news outlets would report on this strange phenomenon of liberals clinging to their masks but it is also being reported, surprisingly, on MSNBC as we see correspondent Alex Seitz-Wald do while describing this problem to host Hallie Jackson on Thursday.

Just an absolutely amazing admission here. An MSNBC reporter notes that the biggest challenge for Democrat governors ending their mask mandates is that liberals have made mask-wearing such an important part of their identity that they might not be able to give it up. pic.twitter.com/LhCp4T279A

But that message hasn’t really been that loud because, as you point out, the base is divided. A large number of Democrats are not there yet. So I think this is going to be a challenge for a lot of Democratic leaders to get their base comfortable with the idea of going back to normal. I mean, for the past two years so much of the identity of what it meant to be a Democrat, to follow the science, was tied up in masking and following these rules and regulations. And if you didn’t do that, you were, you know, a bad person, you were Ron DeSantis, you were a denier. So, now, these Democratic leaders need to get their base comfortable with unwinding all of that.

So who might be those liberals who will continue to wear masks indefinitely into the future, perhaps to the Year 2525 if Man is still alive? Well, we already know that one of them would be Joy Behar who proclaimed that “I would wear a mask and I might do that indefinitely.”

Those liberal mask identity markings to virtue signal each other in public are all important even if the masks no longer serve any practical purpose.

‘This is a contest between radical left socialism versus freedom and prosperity’: GOP Sen. Ron Johnson will face Wisconsin Lt. Gov. Mandela Barnes during 2022 election
Facebook defends itself after handing over chat messages to police investigating abortion
Using the Nuclear Pretext to Attack President Donald Trump Is Blown Up
Muslim community terrified by random gunshot murders — police arrest Muslim who may have been motivated by sectarian dispute
The FBI Needs to Raid Barack Obama’s Home Next. Here’s Why.