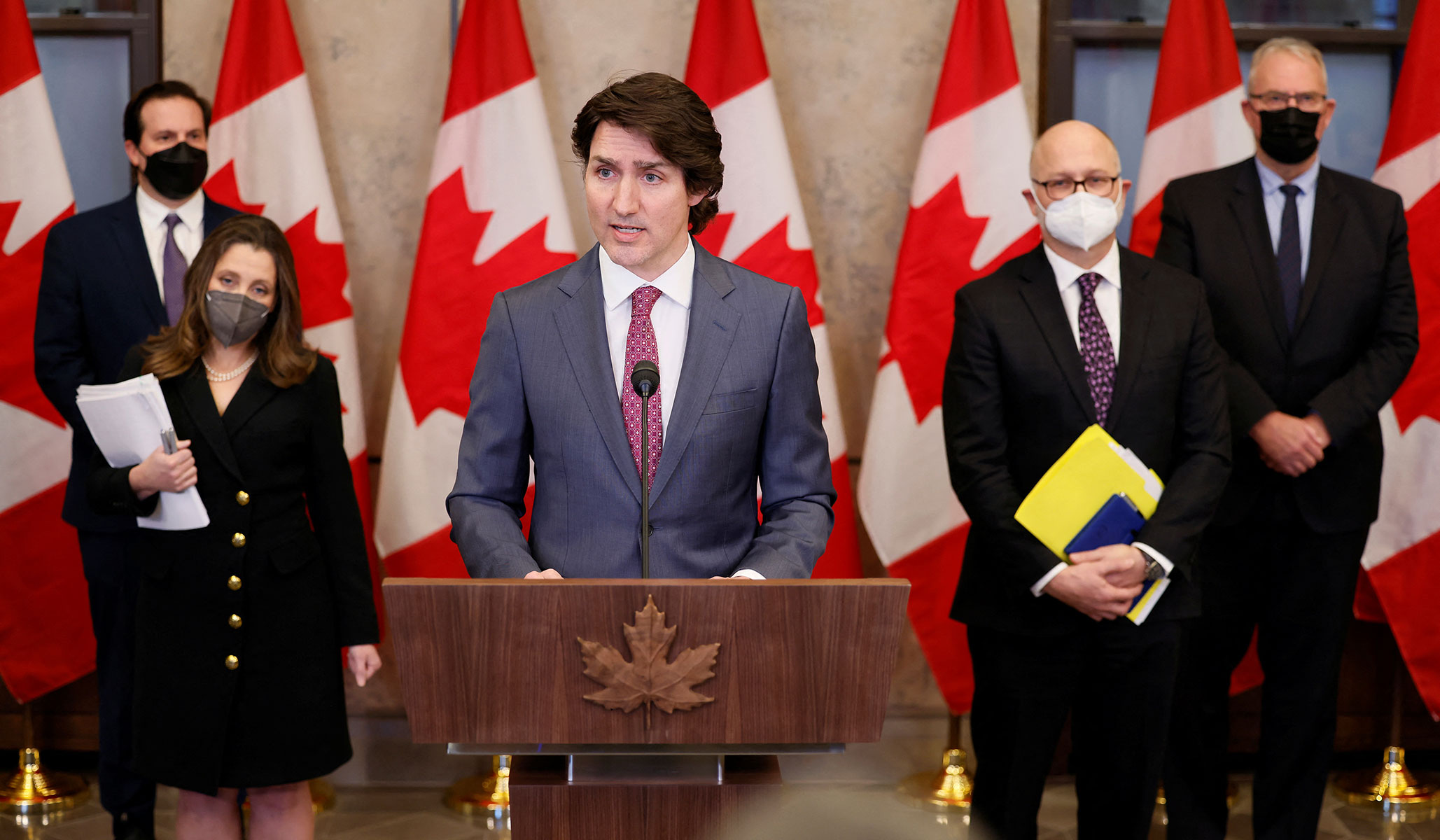 Prime Minister of Canada Justin Trudeau has invoked special emergency powers to confront the trucker convoy, which has been blockading major cities and highways in protest against the cross-border vaccine mandate imposed by the Canadian government.

The law, the Emergencies Act, written in 1988, has never before been used. It gives Trudeau’s administration special authority for 30 days to restrict movement, freeze financial accounts (including personal bank accounts and cyptocurrency transactions), and direct citizens to certain actions, such as the forced towing of the trucks.

“The government has invoked the Emergencies Act to supplement provincial and territorial capacity to address the blockades and occupations,” Trudeau said at a press briefing Monday.

After rallying for what they’re calling “medical freedom” in Ottawa, the capital of Canada, the truckers expanded their demonstration to other locations while a cohort stayed behind to keep protesting in the city. Protestors have been erecting tents and camps and picketing with signs to pressure the government to acquiesce.

Some of the departed trucks caused traffic gridlock last week on a busy trade bridge connecting Windsor, Canada, to Detroit, Michigan. About a quarter of goods between the countries are transported over this bridge.

Canada’s Deputy Prime Minister and Minister of Finance Chrystia Freeland said Monday that the government could use the Emergencies Act to cut off the financial pipelines of those involved in the blockades.

“As of today, a bank or other financial service provider will be able to immediately freeze or suspend an account without a court order. In doing so, they will be protected against civil liability for actions taken in good faith,” Freeland said.

Convoy organizers first had their capital disrupted when crowdfunding platform GoFundMe booted them as a customer, claiming that the truckers had engaged in unruly behavior and violence that violated their terms of service. The protestors then switched to Christian crowdfunding site GiveSendGo.

Freeland specified that crowdfunding sites and the payment service providers must be approved by the Financial Transactions and Reports Analysis Centre of Canada (FINTRAC), the national financial intelligence agency. These companies are also required to report large and suspicious transactions to FINTRAC.

“The illegal blockades have highlighted the fact that crowdfunding platforms, and some of the payment service providers they use, are not fully captured under the Proceeds of Crime and Terrorist Financing Act,” Freeland said. “We are making these changes because we know that these platforms are being used to support illegal blockades and illegal activity which is damaging the Canadian economy.”

Technically, the government can exercise the Emergencies Act only if there is a crisis that cannot adequately be solved by the local regions of the country or by any existing federal legislation.

“It is now clear that there are serious challenges to law enforcement’s ability to effectively enforce the law,” Trudeau added. “This is about keeping Canadians safe, protecting people’s jobs, and restoring confidence in our institutions.”

While it appears that the government is preparing to mobilize against the truckers through a variety of means, Conservative MP Pierre Poilievre said Trudeau could kill two birds, the protests and blockades, with one stone by simply dropping the vaccine requirement.

“You know how we can put an end to both of them? Real simple. Listen to the science, do what other provinces and countries are doing — that is to end the mandates and restrictions so protesters can get back to their lives and their jobs,” Poilievre said Monday. “The only emergency is the one that Justin Trudeau has deliberately created to divide the country and gain politically.”

The current rule prohibits unvaccinated drivers of freight trucks traveling from Canada to deliver goods to the U.S., which trucking industry officials have argued will exacerbate supply-chain issues already strangling both economies.

REGIME PROPAGANDA: Univision Anchor Cheerfully Sells Manchin Spending Bill
Tin-foil Haturday: Monkeypox, Fentanyl, and The Skullduggery of Joe Biden (or Whoever Is in Charge)
SpaceX raises another $250 million in equity, lifts total to $2 billion in 2022
Conspiracy theorist Alex Jones ordered to pay another $45m to parents of Sandy Hook victim
‘Rebound’ COVID Cases Aren’t the Only Problem With Paxlovid