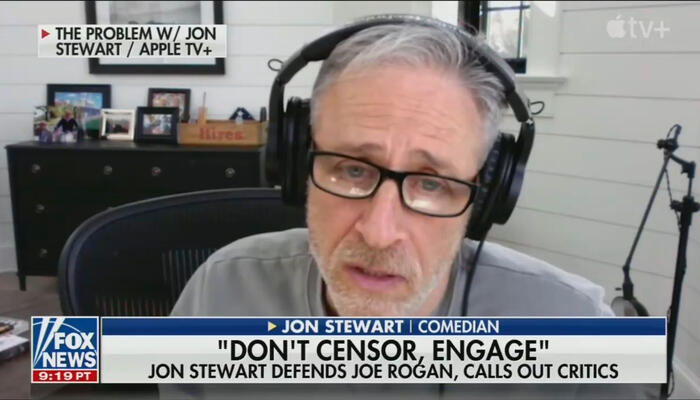 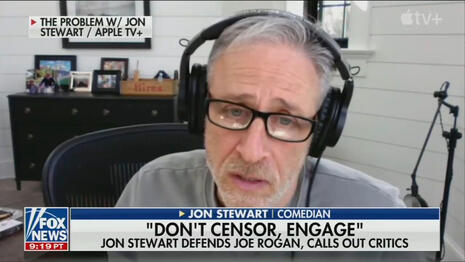 Jon Stewart doesn’t know which way is up these days.

The former Daily Show host once soaked up media praise for his progressive spin on the news. Now, far removed from that gig, the same reporters now look at him curiously, like a relic from the past.

The host of the Apple TV+ show The Problem with Jon Stewart seems just as lost.

Critics massacred his most recent project, the satirical 2020 film Irresistible. How dare he take a somewhat fair and balanced look at the political scene? Why isn’t he “destroying” conservatives in every sequence?

And, most importantly, Stewart barely recognizes a cultural landscape where speech suppression is cheered on by the press, academia and his own political party. Heck, just a few months ago Stewart denied Cancel Culture even exists.

Now, he’s scrambling to fight against it.

Stewart slammed those trying to cancel podcast giant Joe Rogan, demanding more voices, not less. Rogan is under sizable attack for allegedly sharing misinformation, often from the same outlets that actively do just that.

Don’t leave, don’t abandon, don’t censor, engage. I’m not saying it’s it’s always going to work out fruitfully, but I am always of the mindset that engagement, and especially with someone like a Joe Rogan who is not, in my mind, an ideologue in any way.

How did we get here? Stewart deserves part of the blame.

The comedian transformed late night television into a partisan affair, cheering on progressives and demonizing conservative voices. He did it well, to his credit, mixing his signature wit with a stunned look he summoned on demand.

Look how dumb the other side is! In the process, he demeaned, or dehumanized, half the country. He told his flock their opinions weren’t just wrong, but often cruel.

His peers, think Stephen Colbert, Seth Meyers and John Oliver, took it from there. The modern late night show is akin to a Democratic SuperPAC, brimming with spin, misinformation and attacks on the GOP.

Oh, and the jokes are few and rarely funny.

Stewart also famously took down CNN’s “Crossfire,” a show where liberals and conservatives slugged it out over public policy. Stewart trashed the show, in person, sparking its eventual downfall. He also showed how a popular celebrity could use his brand to stifle speech he didn’t enjoy.

Stewart could have spent the last few years doing what Bill Maher does each Friday night. Preach from the progressive bible while mocking his fellow liberals when they behave badly.

As is, Maher is all alone in this battle. He could use some company, especially from someone with the cultural gravitas Stewart brings with him.

Except Stewart’s heart isn’t in it.

Sure, he just stood up for Rogan, but for how long? Will he use his Apple platform to smite others trying to snuff out free speech? (His Rogan defense happened on his podcast) Has he done so already? If not, why not?

Stewart said all the right things about the fight to cancel Rogan. Now, he’ll move on to attacking Gov. Ron DeSantis, President Donald Trump or other familiar targets for him. He previously shocked everyone when he calmly explained why the lab leak theory made total sense, while a stunned Stephen Colbert looked on.

Did Stewart repeat that performance? Did he skewer other Fake News narratives tied to the pandemic, or the man responsible for so many of them – Dr. Anthony Fauci?

Stewart could make a real difference in the culture, though, if he rolled up his sleeves and joined Maher in the fight against Cancel Culture and its enablers.

[Cross-posted from Hollywood in Toto]

Using the Nuclear Pretext to Attack President Donald Trump Is Blown Up
Due to lack of support in state legislature for 12-week abortion ban, Nebraska governor won’t call special session
Man attacked a woman with a hammer, shot her in the face and then abducted her 10-year-old daughter, police say
‘Total devastation’: Home explodes in Evansville, Indiana, killing 3 and mangling neighborhood
Facebook defends itself after handing over chat messages to police investigating abortion