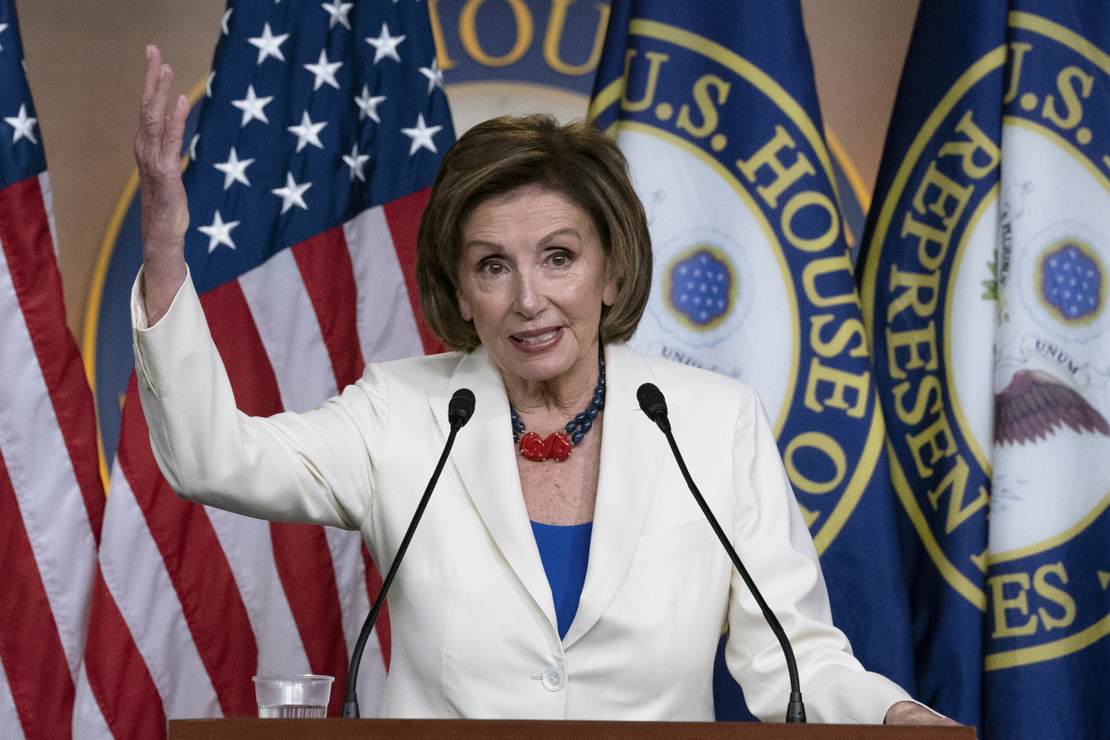 With the Left, it’s always the same story: the rules they demand that we follow just don’t apply to them at all. Examples of this are numerous, and there are more all the time: most recently we’ve seen Stacey Abrams posing maskless in a room full of masked children, and Joe Rogan being canceled for a racial slur that even his Leftist accuser has used copiously. And now it has come to light that House Speaker Nancy Pelosi (D-Smirnoff), has spent more than $500,000 on private jets since Oct. 2020, while hectoring us about our “moral obligation” to limit carbon emissions. Pelosi’s jets’ emissions, you see, don’t contribute to climate change because she is on the side of the angels regarding that spurious crisis.

Fox News reported Monday that “according to campaign filings with the Federal Election Commission, Pelosi’s campaign paid a Virginia-based private aviation provider, Advanced Aviation Team, over $437,000 between October 2020 and December 2021 and over $65,000 to Clay Lacy Aviation, a California-based private jet provider.” This matters because “private jets are notoriously bad for the environment, producing significantly more emissions per passenger than commercial flights.”

The hypocrisy was total, and in your face: Pelosi shelled out $67,605 to sip her vodka on private jets even after she said in November that her commitment to fighting climate change by crippling the American economy came out of her obviously deep commitment to Roman Catholicism: “For me,” said Pelosi, “it’s a religious thing. I believe this is God’s creation, and we have a moral obligation to be good stewards. If you don’t share that view, you must share the view that we have an obligation to future generations.”

In view of her deeds not matching her words, the question must be asked: does Pelosi herself believe in the idea that catastrophic changes to the climate are coming as a result of human action, and specifically carbon emissions, and that these disasters can only be headed off by giving even more power to the federal government, destroying the American economy, and handing global economic hegemony to the People’s Republic of China?

In light of all the evidence, it is extremely unlikely that she does. And she is by no means alone as a hypocrite among Democrat leaders. Last October, Old Joe Biden exhorted us to support his pork-laden socialism bill as “the most significant investment to address the climate crisis ever,” and promised that it would “truly transform this nation,” which were likely the truest words this serial liar has ever spoken. But the day after Old Joe called on us to dig deeper into our already depleted pockets to fund his climate agenda, he climbed into his massive well-armored limousine, which is known as The Beast, and cruised around Rome as part of a motorcade that was at least 85 vehicles long.

Related: Climate Change Is Not a Crisis

Fox also notes that Biden “spent over $15 million on private air travel over the course of his 2020 campaign,” and that “the Democratic National Committee (DNC) has also been vocal about climate change and being ‘committed to curbing the effects of climate change,’ but they have paid out hundreds of thousands of dollars to Advanced Aviation Team in recent years.” And Biden’s supreme climate scold, John Kerry, is no less hypocritical: “In August 2021, Fox News Digital calculated that Kerry’s family jet already emitted approximately 30 times more carbon in 2021 than the average vehicle does in a year.”

It’s as clear as the beach views from Obama’s new waterfront mansion that the Left doesn’t really believe in their climate change hysteria at all, or they’d be buying land in Kansas, not Martha’s Vineyard and Rehoboth Beach and Hawaii. Back in 2004, the UK’s far-Left Guardian reported that “A secret report, suppressed by US defence chiefs and obtained by The Observer, warns that major European cities will be sunk beneath rising seas as Britain is plunged into a ‘Siberian’ climate by 2020. Nuclear conflict, mega-droughts, famine and widespread rioting will erupt across the world.” Yes, by 2020! Everybody panic! “The document predicts that abrupt climate change could bring the planet to the edge of anarchy as countries develop a nuclear threat to defend and secure dwindling food, water and energy supplies. The threat to global stability vastly eclipses that of terrorism, say the few experts privy to its contents.”

This report, said the Guardian, “will prove humiliating to the Bush administration, which has repeatedly denied that climate change even exists.” Well, it didn’t. The people who should have been humiliated were the climate alarmists and scolds such as Pelosi and Biden, who are using their climate hysteria to force Americans to accept economic decline. But the Left, unaccountable and protected by the media, is never humiliated, no matter how risible its claims turn out to be. If anyone dares to note her hypocrisy, Pelosi can just hop on a private jet, pour herself a stiff one, and put all the unpleasantness out of her mind.