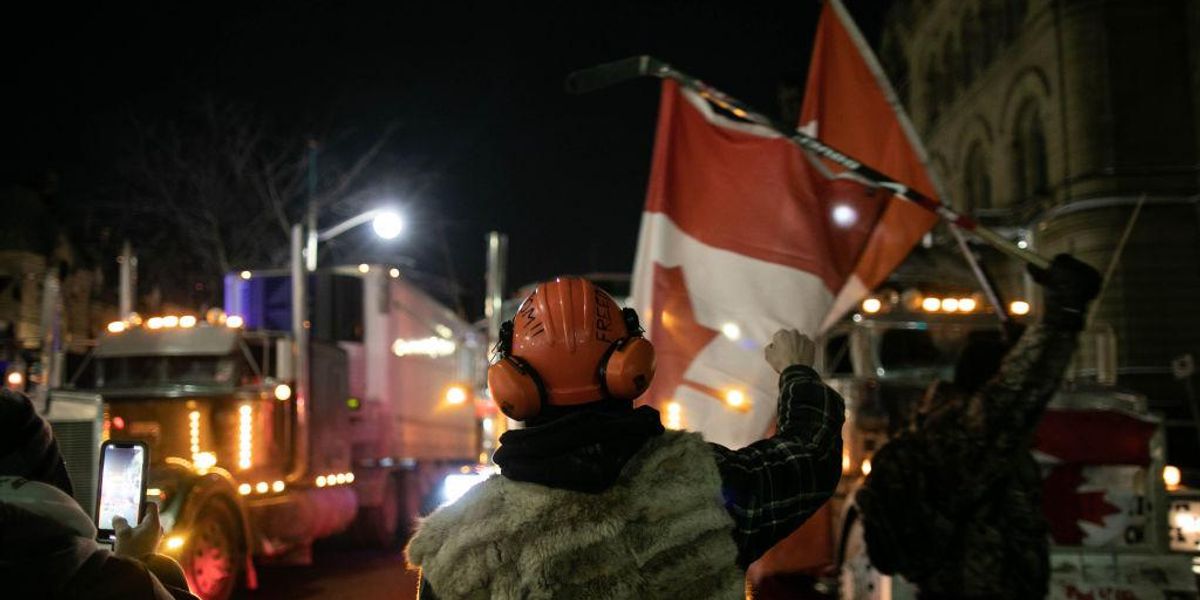 Canadian authorities began cracking down on the Freedom Convoy this weekend. Ottawa Mayor Jim Watson declared a state of emergency on Sunday in an effort to contain truckers who have protested peacefully in Canada’s capital.

“Declaring a state of emergency reflects the serious danger and threat to the safety and security of residents posed by the ongoing demonstrations and highlights the need for support from other jurisdictions and levels of government,” the city said in a statement. “It also provides greater flexibility within the municipal administration to enable the City of Ottawa to manage business continuity for essential services for its residents and enables a more flexible procurement process, which could help purchase equipment required by frontline workers and first responders.”

Watson said that Ottawa was “outnumbered” and “losing the battle” against the truckers’ protest.

“The situation at this point is completely out of control, because the individuals with the protest are calling the shots,” Watson said on Sunday. “They have far more people than we have police officers, and I’ve indicated to the chief that we have to be much more nimble and proactive when it comes to these activities.”

“It should have ended days ago, there’s no question about that,” the mayor continued. “The nerves of the residents, particularly in the downtown core, are frayed beyond belief. They are suffering, and the protesters do not seem to have any understanding of how insensitive they are, blaring horns and sirens and fireworks, and turning it into a party. … Bringing in bouncy castles and saunas and hot tubs is the height of irresponsibility.”

“Clearly, we are outnumbered and we are losing this battle right now,” Watson said. “This has to be reversed; we have to get our city back.”

“The state of emergency gives our staff and our city a few extra tools to speed up things like procurement,” he told the CBC News Network on Sunday night.

“We’re in the midst of a serious emergency, the most serious emergency our city has ever faced, and we need to cut the red tape to get these supplies available to our police officers and to our public works staff,” Watson said.

Watson added that the city had 60 new RCMP officers sworn in on Saturday to help contain the trucker protest.

Around 2 p.m. on Sunday, the Ottawa Police Department declared that anyone providing fuel and materials supporting the truckers can be arrested.

“Anyone attempting to bring material supports (gas, etc.) to the demonstrators could be subject to arrest. Enforcement is underway,” the Ottawa Police tweeted.

IMPORTANT: Anyone attempting to bring material supports (gas, etc.) to the demonstrators could be subject to arrest. Enforcement is underway. #ottawa #ottnewspic.twitter.com/tp4e5d2xe1

There is a long row of tow trucks at the ready to remove transport trucks nI see 30 police officers dismantling the logistics camppic.twitter.com/LXWPv7tFcg

Section 8 of the Charter of Rights reads u201cEveryone has the right to be secure against unreasonable search or seizure.u201d Without a search warrant, this is just theft. Governments are used to violating our privacy now, arenu2019t they? And the media love it.pic.twitter.com/UOYAK6OoF8

Shortly after 9 p.m., the Ottawa Police Service announced that it had “made multiple arrests in relation to several enforcement actions” in regards to the trucker protest. The Ottawa Police also said, “Multiple vehicles and fuel have been seized.”

“More than 100 Highway Traffic Act and other Provincial Offence Notices were issued including excessive honking, driving the wrong way, defective muffler, no seat belt, alcohol readily available and having the improper class of driving license,” the announcement reads. “There are over 60 criminal investigations so far related to the demonstration. They are primarily for mischief, thefts, hate crimes, and property damage.”