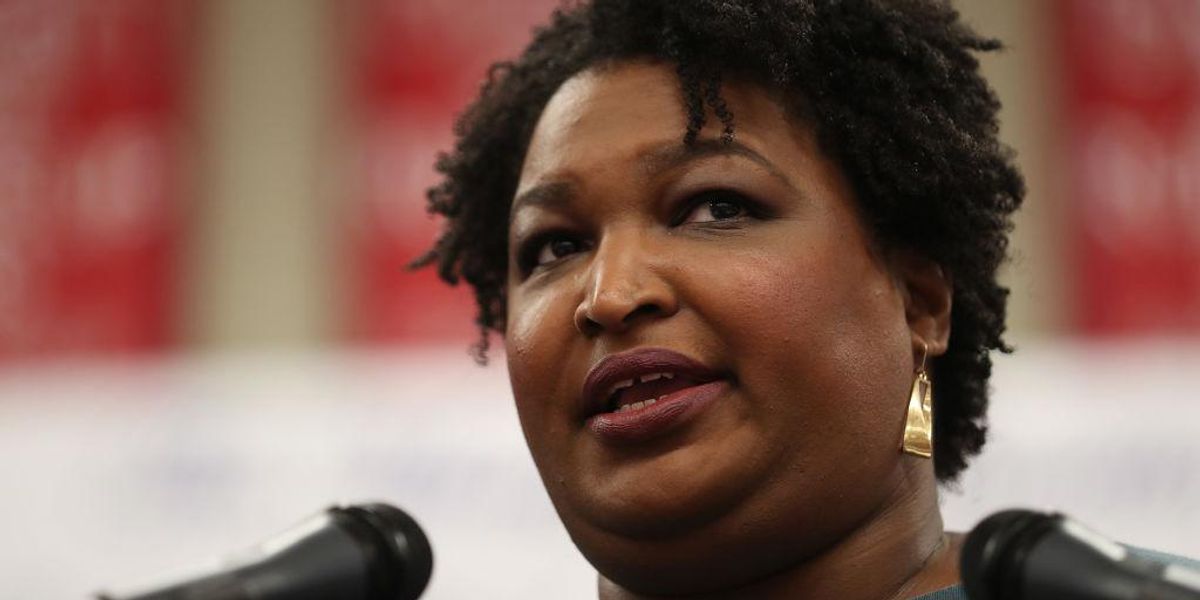 Democratic darling Stacey Abrams shared a photo of her unmasked in a classroom full of young children who were forced to wear face masks. However, the photo was removed from social media after Abrams was skewered for the awful optics and accused of engaging in hypocritical behavior of flouting a mask mandate.

The Georgia Democratic gubernatorial candidate retweeted the principal’s tweet featuring photos of her at the school.

Have a feeling this photou2014which Abrams promoted on her own accountu2014of her appearing maskless surrounded by kids in masks is gonna be in a lot of ads this fall.pic.twitter.com/gYtDOMGTeK

However, by Saturday the photos were deleted.

These tweets u2014 with a photo showing Stacey Abrams maskless surrounded by masked children & showing Abrams promoting it from her own account u2014 have now both been removed. (Abrams deleted her own tweet and it appears that the original account has been deactivated or something).pic.twitter.com/qzzAPolsE2

The school is located in Decatur City, which recently extended its face mask mandate until February 22, 2022.

The photos of the grinning Democratic politician in a room full of masked children enraged many.

Georgia governor Brian Kemp (R): “Stacey Abrams wants state government mask mandates for Georgians and their children. But it looks like they wouldn’t apply when she’s attending a photo op.”

National Review editor Rich Lowry: “Confirmation, if any were needed, that Stacey Abrams is a member of the Democratic elite in good standing—mask hypocrisy is practically a status symbol now.”

Journalist Glenn Greenwald: “Meanwhile: since @staceyabrams is a very sophisticated and important liberal, I’m sure there’s something in The Science™ that justifies her being maskless indoors, surrounded by young kids forced to wear masks all day. Maybe she’s holding her breath?”

Republican candidate for Georgia’s 6th congressional district Jake Evans: “Stacey Abrams is mask-less while all the children around her suffer. This is child abuse.”

Conservative think tank American Principles Project: “Self-righteous politicians show off their smile as they force your children to be muzzled all day, set back years in their development, and carry the burden of a pandemic that was never at high risk to them.”

Board-certified ophthalmologist and biomedical research scientist Houman David Hemmati: “This recent image of political activist @staceyabrams of Georgia (who is at VERY high risk for COVID death) sitting unmasked, with a huge wide grin, in front of forcibly masked kids whose smiles we/they will never see, exemplifies the hypocrisy of politicians.”

Washington Examiner executive editor Seth Mandel: “Stacey Abrams cutting an ad for her opponent is extremely weird I would not recommend this strategy.”

Outkick founder Clay Travis: “The number of left wing politicians who post photos posing without masks while all the kids around them are wearing masks is stunning. Here is Stacey Abrams doing it. This is child abuse.”

Political strategist Caleb Hull: “Stacey Abrams, who is obese and in the high risk category, not wearing a mask while children, who are in the lowest risk category, are all masked just about sums this whole pandemic up.”

Communications director for Rep. Andrew Clyde (R-Ga.) – Madeline Corso: “Just to recap… Youngkin: anti-mandates & didn’t wear a mask in a VA grocery store where it’s optional. Abrams: pro-mandates & didn’t wear a mask in a GA school where children are forced to wear them There’s a reason only one of them is a governor—and the other never will be.”

Talk show host Larry O’Connor: “Are these little children forced to wear masks to protect @staceyabrams? What kind of cruel monster makes little children cover their faces so they can have a photo op without fear of viral infection? If you’re so afraid that you make kids wear masks around you, stay home!”

The Abrams campaign released a statement regarding her flouting the mask mandate without actually mentioning it.

“It is shameful that our opponents are using a Black History Month reading event for Georgia children as the impetus for a false political attack, and it is pitiful and predictable that our opponents continue to look for opportunities to distract from their failed records when it comes to protecting public health during the pandemic,” the statement reads.

In the past, Abrams has told others to wear face masks.

As our nationu2019s COVID death toll exceeds the 1918-19 Spanish flu, Georgia tragically has more than 20,000 souls in the number. We mourn their passing, and we should be doing more to save lives. Wear masks. Get vaccinated. Support healthcare workers w/more than rhetoric. Do right.

Wear a mask. Go to the polls. Cast your vote. Save our democracy. http://iwillvote.comu00a0 nn: @kevloweryphotopic.twitter.com/SEvQfRj2xy