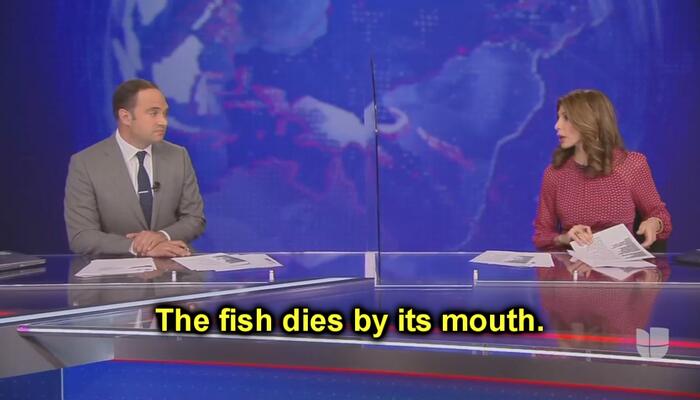 For a brief moment Univision, the nation’s leading Spanish-language network, showed moral clarity by reporting a story unfavorable to Democrats in an unbiased manner.

PATRICIA JANIOT: Let’s go now to the White House, Galo- not to discuss Ukraine but to tell you about what President Biden said. He insulted a reporter from Fox News, a network that constantly criticizes him. It happened after journalist Peter Doocy asked the president whether inflation would be a problem in the midterm elections. Biden seemed frustrated with the question and immediately reacted this way. Listen:

PRESIDENT JOE BIDEN: That’s a great asset. More inflation. What a stupid son of a bitch.

JANOT: This very evening, President Biden called journalist Peter Doocy and offered him an apology for his remarks. It is unbelievable, León, that a President of the United States would be unable to take a question as important as the one that Doocy asked him.

JANIOT: It is. The fish dies by its mouth.

KRAUZE: It is. And unfortunate, without a doubt.

Mind you, the report wasn’t perfect. Biden did NOT, in fact, apologize to Doocy but instead offered the non-apologetic “never personal, pal”. Do also note Janiot’s framing of Fox as being constantly critical of Biden, as if we are somehow expected to forget Univision’s behavior over the past decade. Nonetheless, this report stands out as a brief glimmer of moral clarity in a sea of spin and apologia. I say it is a brief glimmer because Univision reverted to its usual servility towards Democrats as quickly as the following prime-time newscast, spinning Biden’s attack on the free press as the result of frustration.

Of note, this exchange happened during León Krauze’s maiden broadcast on Univision’s late night newscast. Krauze just joined the national desk following a lengthy stint as anchor at Univision’s Los Angeles affiliate KMEX-34, and some of you may remember him for putting the squeeze on Bernie Sanders back in 2016.

It is refreshing to see a story covered accurately and fairly on a network that for far too long has done the exact opposite. For years, we have said that Univision’s viewers deserve better. In this instance, they got better. It remains to be seen whether this is just a blip, or the beginning of a much-needed editorial course correction. Time will tell.