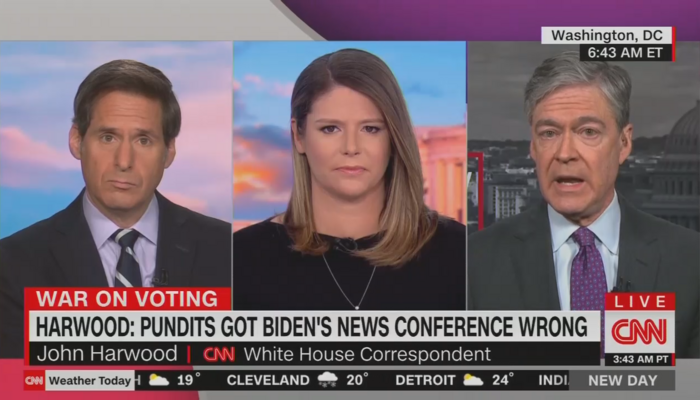 CNN’s John Harwood is a shameless Biden sycophant. Last month, we caught him saying that Biden’s shirking of responsibility for COVID, saying there was no “federal solution,” and that it was up to the states, was just a “throwaway line.” Harwood claimed that Biden was just being “polite,” and that “more has been made of that beginning of the conversation than is warranted.”

Harwood was back on New Day Friday morning. And predictably, he defended Biden’s pitiful press conference performance. Harwood’s shameless sycophancy was on display in the screencap: “Harwood: Pundits Got Biden’s News Conference Wrong.”

In particular, Harwood justified Biden having questioned the legitimacy of the midterm elections, and his comment that a “minor incursion” into Ukraine ordered by Putin might not merit a full-blown US response.

On the issue of Biden questioning whether election results would be “legit” if his “voting rights” bills aren’t passed, Harwood said the difference is that Republicans have been trying to undermine election integrity, thus imperiling “democracy.” In contrast, claimed Harwood, “Biden is leading Democrats to try to protect the integrity of elections.”

Note that Harwood cited “election experts” who told him the downside to Biden saying he wasn’t sure the elections would be “legit” is that it could undermine “confidence” in the elections. Translation: Biden could be discouraging his own base from voting. So, the only concern that Harwood and the “experts” have is that Biden’s comments might diminish Democrat victory chances!

On “minor incursion,” Harwood suggested that Biden’s statement didn’t really do any harm, since Putin already knew through sources that such was the U.S. position. And Harwood dismissed the outrage expressed by Ukrainian officials, sniffing it was merely something they “had” to do for public consumption, since Biden’s comment “sounds bad.”

Kasie Hunt got in a nice little zinger at the end, saying that Biden’s performance might have signaled his “weakness” to our allies, thus adding to the “danger.” Got that, Harwood?

PS: Someone should clue in Harwood that we’re in 2022, not 1987. On Ukraine, Harwood spoke of different offenses that the “Soviet Union” might commit.

KASIE HUNT: In President Biden’s first news conference this year, he suggested that the legitimacy of the upcoming midterm elections might depend on voting rights legislation, passing congress.

JOE BIDEN: I’m not saying it’s going to be legit. The increase in the prospect of it being illegitimate is in direct proportion to us not being able to get these, these reforms passed.

HUNT: It has led to some questions about whether this is equal to the former President Trump undermining election integrity. That’s an equivalency that our next guest argues isn’t the right one to make. Joining us now, CNN White House correspondent John Harwood. John, so, what’s your argument here?

JOHN HARWOOD: First of all, welcome back, Kasie. It’s great to

HUNT: Thank you. Great to be here.

HARWOOD: Look, let’s step back and think about what both men have tried to do. Donald Trump lost the election in 2020. Lied about it, claimed fraud, tried to overturn it legally, failed. Tried to bully election officials: get me 12,000 more votes, failed. And then incited mob violence against the Capitol. He was trying to corrupt the election. And since 2020, that corruption effort failed, Republican legislators around the country have been trying to engineer changes in election administration and voting procedures to make sure that they can succeed where Trump failed. That is pretty stark. That’s why we’ve been covering “democracy in peril.”

Joe Biden is leading Democrats to try to protect the integrity of elections. And those are pretty fundamentally different things.

Now, some of the election experts I talked to said he shouldn’t say that the election might be illegitimate. Because you don’t want to trigger the electoral-confidence equivalent of a run on the bank, and further undercut confidence. But there is a genuine threat to American democracy. And that’s what Joe Biden was highlighting.

JOHN BERMAN: Likewise, John, the president obviously received a great deal of criticism for the way he talked about Ukraine. Is there a different way to look at it than it’s been covered? Is it not as damaging, as some suggest, to say there would be different responses for different Russian actions?

HARWOOD: What Joe Biden alluded to, that is the different responses to different offenses by the Soviet Union [sic], are things that our diplomats and national security officials have been saying privately. If they’ve been saying privately to reporters and to other diplomats, it is hard to imagine that anything Joe Biden alluded to is not already known by Vladimir Putin. Vladimir Putin’s the decision maker. So, if it doesn’t change what Putin knows as he’s making his decision, how significant is the greenlight?

Certainly as a public matter, the Ukrainians had to react because it sounds bad. But does it really change the dynamics of the decision that rests with Vladimir Putin itself? I’m not sure.

HUNT: It’s an interesting point. Although, the one thing I will just add is that we know that Vladimir Putin has been trying to sow division in the United States in an effort to make us weaker

HUNT: And any perception among our allies that there is weakness coming from Joe Biden is potentially adding to that danger.