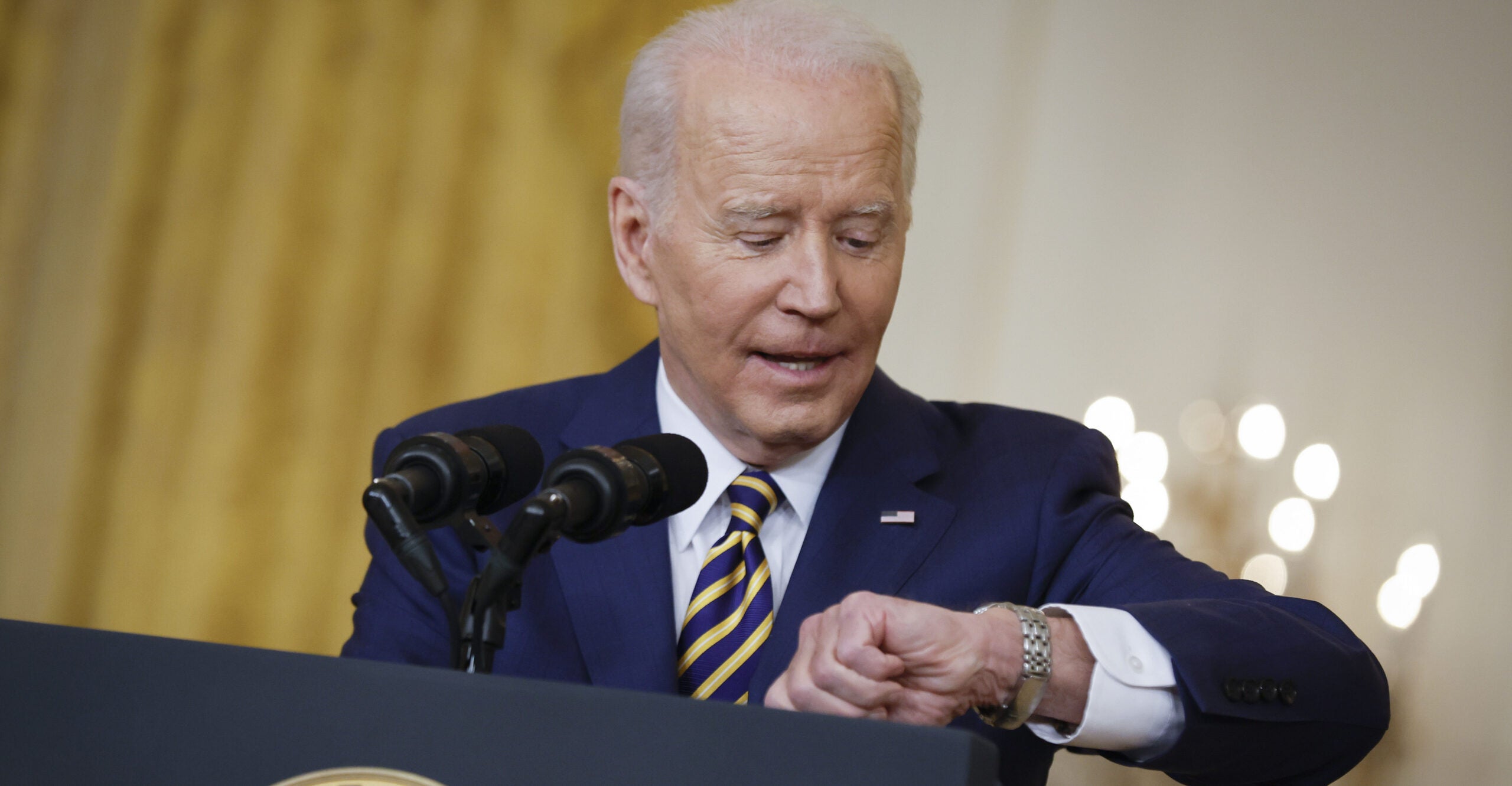 In a press conference stretching nearly two hours Wednesday, President Joe Biden appeared to go off his prepared list of reporters, taking questions on the legitimacy of the upcoming midterm elections, his cognitive ability, China, Russia, and his son Hunter Biden.

On the eve of completing one year in office, Biden also talked about the state of “the cables,” meaning cable news channels, and the future of Vice President Kamala Harris.

1. Legitimacy of Next Election

Biden has pushed for Congress to pass two Democrat-sponsored bills: one to give the federal government expanded veto power over state election laws, the other to increase voting by mail and require automatic voter registration.

The bills are scaled-back versions of legislation known as HR 1 that Democrats unsuccessfully attempted to pass earlier this year. That bill would have eliminated most voter ID laws and expand the practice of ballot harvesting.

Asked whether the midterm elections next year would be legitimate if the two bills were not enacted, Biden said it depends.

“Speaking of voting rights legislation, if this isn’t passed, do you still believe the upcoming election will be fairly conducted and the results will be legitimate?” a reporter asked.

Biden responded:  “It all depends on whether or not we’ll be able to make the case to the American people that some of this is being set up to alter the outcome of the election.”

In 2021, at least 18 states passed election reform laws to strengthen voter ID requirements and clear voter registration rolls of the names of ineligible voters. But Biden again said Wednesday that Republicans intended such laws to keep minorities from voting.

“No matter how hard they make it for minorities to vote, I think you are going to see [voters] willing to stand in line and defy the attempt to keep them from being able to vote,” Biden said. “I think you are going to see the people they were trying to keep from being able to show up … making the sacrifice that needs to be made in order to change the law back to what it should be.”

Biden had put Harris in charge of pushing Democrats’ voting legislation, which appeared likely to again fail again Wednesday in the Senate.

A reporter asked whether Biden is satisfied with the job shis vice president has done on pushing the legislation and if she would be Biden’s running mate in 2024.

“Yes and yes,” Biden said. “She’s going to be my running mate, number one. Number two, I did put her in charge. I think she’s doing a good job.”

2. ‘No Idea’ on Mental Fitness

A reporter raised what he called a “delicate subject” by referring to a Morning Consult poll that showed 49% of registered voters disagreeing with the statement, “Joe Biden is mentally fit.”

The poll found that not even a majority of Democrats “strongly agreed” that Biden was mentally fit.

“I’ll let you all make the judgment whether they are correct,” Biden said, before the reporter got to the question.

As Biden smiled, the reporter asked: “Why do you suppose such large segments of the American electorate have come to harbor such profound concerns about your cognitive fitness?”

Biden simply answered: “I have no idea.”

With that, he called on another reporter.

A reporter asked Biden about his three-hour virtual summit with Chinese President Xi Jinping, the origins of COVID-19, and son Hunter Biden’s business ties with China.

“On the coronavirus, we are tragically approaching nearly 1 million Americans who died, and I would like to ask you why it is during your three-and-a-half-hour virtual summit with the Chinese president you didn’t press for transparency,” the reporter said, “and also whether that has anything to do with your son’s involvement in an investment firm controlled by Chinese state-owned entities?”

Biden responded on Xi: “I did raise the question of transparency. I spent a lot of time with him. The fact is they are just not being transparent.”

“Transparency on the coronavirus origins?” the reporter followed.

The reporter then asked: “Is there a reason your press staff was unaware of that? And what did you say to the Chinese president?”

“They weren’t with me the entire time,” Biden said, apparently referring to his press staff. “Look, I made it clear that I thought China had an obligation to be more forthcoming on exactly what the source of the virus was and where it came from.”

When a reporter asked a question about the president’s agenda being at a stalemate, Biden seemed to get touchy and placed himself at a high mark in history.

“Can you think of any other president that has done as much in one year? Name one for me?” Biden said. “I’m serious. You guys talk about how nothing has happened.”

I don’t think there has been as much on any incoming president’s plate that has been a bigger menu than the plate I had given to me. I’m not complaining. I knew that running in. The fact of the matter is, we got an awful lot done, and there is more to get done. But let me ask a rhetorical question. No, I won’t.

Although he suggested his first-year accomplishments were unparalleled in U.S. history, Biden also blamed Republicans for stalling his agenda.

“I did not anticipate that there would be such a stalwart effort to make sure that the most important thing was that President Biden didn’t get anything done,” Biden said. “Think about this. What are Republicans for? What are they for? Name me one thing they are for.”

Biden said some Republican senators want to work with him, but fear primary challengers, in part because of former President Donald Trump’s continued influence.

“I’ve had five Republican senators talk to me, bump into me–quote, unquote–or sit with me who told me that they agree with whatever I’m talking about. ‘But Joe, if I do it, I’m going to get defeated in a primary.’ We’ve got to break that. It’s got to change,” the president said.

A reporter asked who the five Republicans were, and Biden sarcastically said, “Sure.”

“No. Are you kidding me?” the president said, smiling. “I maintain confidentiality.”

Biden seemed to think that Russian President Vladimir Putin would feel he had “to do something” regarding his past threats to Ukraine—including an invasion.

“I think he is dealing with what I believe he thinks is the most tragic thing to happen to Mother Russia, in that the Berlin Wall came down and the empire has been lost. … The Soviet Union has been split,” Biden said.

“But think about what he has,” the president added of Putin. “He has eight time zones … a situation where he has a lot of oil and gas.

Biden said Putin is “trying to find his place in the world between China and the West.”

Biden said an invasion would harm Russia “badly” because of economic sanctions that would be imposed by the U.S. and allies. However, he said it’s not likely that allies would want Ukraine to join the North Atlantic Treaty Organization.

The likelihood that Ukraine is going to join NATO in the near term is not very likely, based on much more work they have to do in terms of democracy and a few other things and whether or not major allies of the West would vote to bring in Ukraine right now. So there is room to work there if [Putin] wants to do that. But I think, as usual, he’s going to—well, I probably shouldn’t go any further—I think it will hurt him badly.

7. Breaking Up ‘Build Back Better’

Biden said that “chunks” of his gigantic Build Back Better Act, a social and energy spending bill, still could pass. His fellow Democrats failed to get the $3.5 trillion bill through Congress last year.

“It’s clear to me that we are going to have to probably break it up,” the president said. “It’s clear we would be able to get support for the 500-plus-dollars for energy and the environment issues that are there, number one.”

Biden said some provisions would gain the support of Sens. Joe Manchin of West Virginia and Kyrsten Sinema of Arizona, the two Democrats who opposed the spending measure in its latest form.

“Number two, I know the two people who opposed on the Democratic side at least support a number of things that are in there. For example, Joe Manchin strongly supports early education.”

Biden added that Democrats support tax increases on high earners to pay for his proposals.

“We can break the package up, get as much as we can now, and come back and fight for the rest later,” he said.

Biden seemed to predict the demise of cable news when asked a question about his sinking job approval ratings in opinion polls.

“The choice of what political coverage the voter looks [at] has as much impact as what they believe,” Biden said. “They go to get reinforced in their views, whether it’s MSNBC or it’s Fox.”

“A lot of speculation in the polling data shows that the cables are headed south,” he said. “They are losing viewership. Fox is OK for a while, but it’s not gaining, and a lot of the rest are predicted to be not very much in the mix in the next four to five years.”

“I do know we have sort of put everyone—put themselves—in certain alleys. … I’m no expert at this. But the fact is, I think you have to acknowledge that what gets covered now is necessarily a little different than what gets covered in the past.”