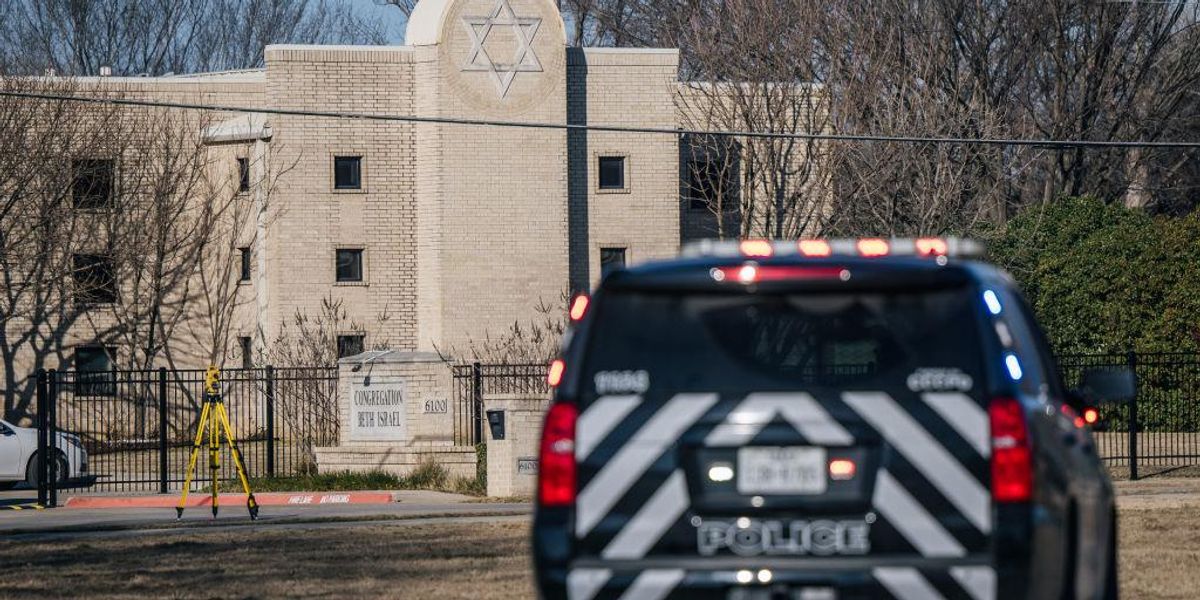 In the eyes of the FBI, the only potential terrorists in this country are those who disagree with the political views of the left – not actual terrorists with ties to foreign terror groups. Which is why any true terrorist attack immediately gets memory-holed by the FBI and the media. The Islamic attack on a synagogue in Colleyville, Texas, is just the latest example.

On Saturday afternoon, 44-year-old British national Malik Faisal Akram allegedly barged into services at Congregation Beth Israel in Colleyville and took four people hostage for about 10 hours. Late Saturday night, the hostages were freed and the suspect was shot dead by the SWAT team, which stormed the building when some of the hostages ran out with the suspect in pursuit. The Associated Press reported that the suspect had demanded the release of Aafia Siddiqui, a Pakistani neuroscientist imprisoned on charges of trying to kill American service members in Afghanistan.

Following the resolution of the hostage crisis, the FBI agent in charge immediately stated that the suspect was “singularly focused on one issue” that was not “specifically related to the Jewish community.” Sure, it just happens to be that the man decides to pick the one Jewish synagogue in an area with few Jews. Remember, this is the same FBI that still has no motive for the Vegas shooting, the Nashville Christmas bombing, the April 2021 Capitol attack, and more recently a case of a black nationalist mowing down six people at a Waukesha parade two days after the Kyle Rittenhouse verdict.

Joe Biden chimed in with an awkward and bizarre statement too: “I don’t think there is sufficient information to know why he targeted that synagogue, why he insisted on the release of someone who’s been in prison for over 10 years … why he was using anti-Semitic and anti-Israeli comments,” said the president on Sunday.

According to British authorities, the suspect was a national of the U.K. He hailed from Blackburn, a city which has radical mosques with ties to Islamists.

Akram apparently arrived in the U.S. just five weeks ago, which makes the concern of ties to international terror even more alarming, especially since police in Manchester, England, arrested two teenagers in connection with Akram.

After these details were disclosed and the British media began reporting on it, then the FBI had to concede the obvious:

Newest FBI statement on Colleyville just in – per Foxu2019s @JakeBGibson: u201cThis is a terrorism-related matter, in which the Jewish community was targeted, and is being investigated by the Joint Terrorism Task Force.u201d

Who is Aafia Siddiqui, the person allegedly at the center of the hostage-taker’s demands? An American-educated Pakistani neuroscientist, Siddiqui was captured in Afghanistan in 2008 and put on trial in 2010 for attacking soldiers. She was accused of grabbing a rifle and firing on soldiers during an interrogation, injuring an FBI agent and a U.S. Army officer. She was sentenced to 86 years in prison after the jury found that “Siddiqui attempted to murder Americans serving in Afghanistan, as well as their Afghan colleagues.” She is residing in a Texas prison. Known as “Lady Al-Qaeda,” Siddiqui demanded during the trial that Jews be excluded from the jury, claiming the entire prosecution had been orchestrated by unnamed “Jews.”

Just two months ago, the Council on American Islamic Relations, which is the American branch of the Muslim Brotherhood, demanded that she be released. So here we have a Texas synagogue attacked by a supporter of an international terrorist who has support from an organization that works together with the DHS and the subject of the matter was a known Jew-hater, yet the FBI can’t connect any dots?

In a Facebook post on November 15, CAIR of DFW wrote, “We’ll be meeting with Congressional offices to educate them about Dr Aafia and call for her release. Special thanks to CAIR for being a pillar and letting utilize the office, which is walking distance from Congress, as our primary staging and organizing area.” Will those congressmen be forced to denounce their supporters the same way allied congressmen of some of the Jan. 6 protesters are being subpoenaed by a special congressional committee? Prominent mosques in America have recently held rallies to free Lady Al-Qaeda. Do you think any of the resources of the DHS and FBI will be focused on those people?

Instead, the entire purview of the FBI is now focused on conservative political groups whom they refer to as white supremacists. Last week, an FBI official told the U.S. Senate that “anti-government extremists,” meaning detractors of the Biden regime, are the nation’s top security threat. In other words, the newly created anti-domestic terrorism unit within the FBI will not be focused on groups with ties to Siddiqui sympathizers, but political opponents of the regime. “We have seen a growing threat from those who are motivated by racial animus, as well as those who ascribe to extremist anti-government and anti-authority ideologies,” stated Assistant Attorney General Matthew Olsen in testimony before the Senate Judiciary Committee. You better believe he doesn’t mean Islamic terrorist sympathizers; he means grandmothers with MAGA hats.

The U.K. Daily Mail is reporting that Akram was given a rare Exclusion Order at Blackburn’s magistrates’ court in the U.K. for his rantings about 9/11. How was a man like this able to fly to the U.S.? Well, evidently our homeland security and counterterrorism agencies are more focused on fighting domestic political opponents than foreign terrorists.

We Can’t Trust Polling on the Jan. 6 Committee
United Airlines pilots to get raises of more than 14%, 8 weeks of maternity leave in new contract
What Kind of Person…
At least 42people found dead inside a Texas lorry
Is it Ruth Bader Ginsburg’s Fault That Roe v. Wade Was Overturned?