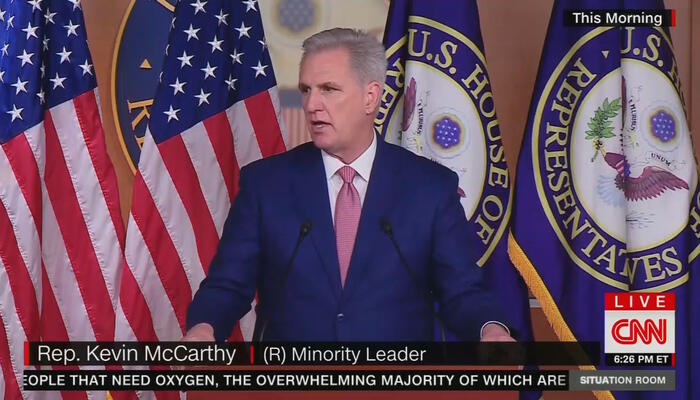 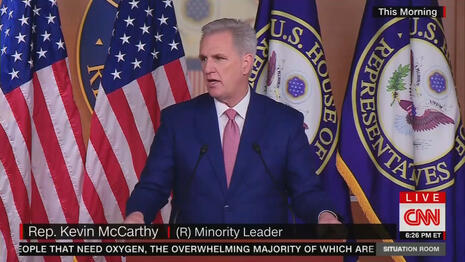 Well this takes the cake. Over there at CNN’s web site, journalist and author Jill Filipovic’s seriously projectionist rant accusing House Republican Leader Kevin McCarthy and his fellow Republicans of seeking to “undermine” American democracy when it is “at its most fragile in generations.”

The specific cause of Filipo’s wrath is that in the event the GOP takes back the House in November, McCarthy has promised to treat House Democrats exactly as they have treated the GOP minority under Nancy Pelosi’s dictatorial rule. Filipo’s headline:

And what is McCarthy threatening to do?

Mind you, the decisions on whether Greene or Gosar sit in Congress at all is made not by their colleagues but the voters of Georgia and Arizona. Once seated, each party decides what committees their respective members will sit on. Say again, each party makes the decision – the opposite party has no role to play in that decision.

But in the Pelosi era Democrats summarily decided to override House tradition and they threw Greene and Gosar off their respective committees. Pelosi also blocked McCarthy’s appointments of Ohio’s Jim Jordan and Indiana’s Jim Banks to the January 6 Committee, his absolute prerogative as Republican Leader.  Pelosi took it upon herself to appoint the Republican members, appointing two notorious Trump-haters, Wyoming’s Liz Cheney and Illinois Rep. Adam Kinzinger. Instantly making the committee a sham with a pre-determined outcome instead of a serious investigation.

It takes absolutely no brains to understand that if your party is going to break tradition one is opening the door for the other party to do the same when they are in charge.

It is irrelevant what Greene or Gosar said or did. Their boss is the voters of their respective districts, just as it is for every other Member. If the voters don’t like them, they can vote them out. That is called democracy.

Then, but of course, Filipo zeroes in on the 147 House Republicans who voted not to certify the electoral vote of the 2020 election. This is, of course, nothing new. Various House Democrats did exactly the same when the House was charged with certifying the Electoral College results of Trump’s 2016 election win and the two George W. Bush wins in 2004 and 2000. Filipo doesn’t even mention that. Which is to say, when some House Republicans vote against certifying a presidential election, this is anti-democracy. But if some House Democrats do the same, well, that’s democracy in action.

Then she goes after North Carolina Congressman Madison Cawthorn for having the gall to exercise his free speech rights for speaking to the pro-Trump rally on the White House Ellipse on January 6. Cawthorn’s sin? Giving his opinion on the 2020 election, and, in the days before the rally, tweeting that “its time to fight.”

Seriously? As a onetime press secretary to a congressman and senator, I can say with assurance that vowing to “fight” is laughably common Capitol Hill lingo that is 100% bipartisan. Examples just from some prominent Democrats:

> Joe Biden: The headline at CBS: “President Biden Vows To Fight Against GOP Voting Limits, Continues Push For Voting Rights Law”. Biden is quoted thusly: “We’re not giving up,” Biden said about the bill, S.1. “I’m going to fight like heck with every tool at my disposal for its passage.”

One could go on – and on and on and on – with Members of Congress vowing to fight for or against this or that. It is one of the most common of phrases in politics. But for Cawthorn to say it? CNN and Filipo make something dark and threatening out of it. In fact, as should be perfectly obvious, a politician pledging to fight for or against X is itself the language of democracy at work.

Filipo goes on to conclude that “Republicans could clean house and declare that no one who attempts to undermine a free and fair election — let alone the American democratic system itself — should serve in Congress with an R next to their name. But instead, the party’s leaders are taking vengeful aim at Democrats with threats of stripping them from committees.”

Hello? With zero self-awareness, Filipo is saying that the objections by House Democrats to the certification of those three presidential elections in 2016, 2004 and 2000 means they were about “attempts to undermine a free and fair election.” Really? Of course not.

Over there at the Daily Caller, historian Victor Davis Hanson takes the time to do a laundry list of the real anti-democracy fanatics. His headline asks:

Who Are The Real Insurrectionists?

– “Who is trying to federalize election laws in national elections contrary to the spirit of the Constitution?”

– “Who wishes to repeal or circumvent the Electoral College?”

– “Who is attacking the founding constitutional idea of two senators per state?”

– The Constitution says that the Chief Justice of the Supreme Court must preside in a presidential impeachment trial. Hanson correctly asks: “Who slammed through the impeachment of former president Donald Trump without a presiding chief justice?”

His list goes on. But the evidence is clear. This was and is the anti-democracy Left in action. And it puts the lie to Filipo’s closing, in which she says:

This isn’t an issue of partisan divide. It’s a fundamental question of what America should be. And the behavior of many Republicans, including several of its leaders, suggests that the GOP’s answer is something other than “a free democratic nation.”

Over in The New York Post, author and USA Today contributor James Bovard gets it, headlining his column this way:

‘Pro-democracy’ and polarizing media are the real threat to liberty

Nothing could be more perilous to the truth than encouraging journalists to pirouette as saviors when they grovel to The Powers That Be. “Pro-democracy” press is a threat to liberty because it will ignore or downplay abuses committed by purportedly pro-democracy rulers. Rather than rigorously scrutinizing Biden’s proposals, the media presume his pursuit of vast power is simply proof of his benevolence.

Hello? The harsh fact here is that the hilariously mis-named “pro-democracy” liberal media outlets are, in fact, exactly the opposite. As CNN’s publishing of Filipo’s call for decidedly anti-democratic policies illustrates vividly, the liberal media is exactly pushing “something other than ‘a free democratic nation.’”

At a minimum, what Filipo and CNN are doing here is “projection.”  Psychology Today defines projection thusly, bold print for emphasis supplied:

Projection is the process of displacing one’s feelings onto a different person, animal, or object. The term is most commonly used to describe defensive projection—attributing one’s own unacceptable urges to another. For example, if someone continuously bullies and ridicules a peer about his insecurities, the bully might be projecting his own struggle with self-esteem onto the other person.

And if it’s not projection? Then in fact they are about a stark call for a very anti-democratic movement.

Filipo’s article is not a solitary stand alone. It is a mere drop in an ocean of leftist media repeatedly saying this or that conservative or the entire conservative movement is ‘anti-democracy” – when in fact it is their leftist friends, leaders and allies- themselves – who are doing exactly what they accuse others of doing.

And if, in fact, Republicans do take back the House and Senate in 2022, not to mention the presidency in 2024? Expect this media ocean of anti-democracy propaganda under the guise of being “pro-democracy” to flood the land.