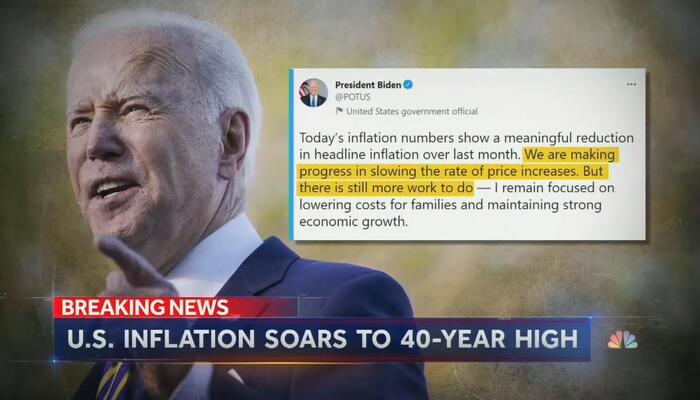 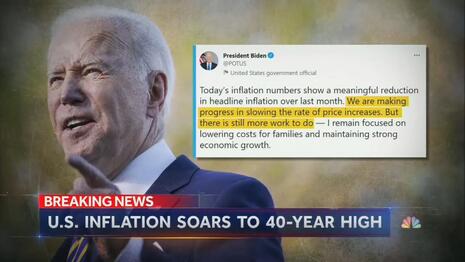 With the stunning economic news out early Wednesday showing that inflation has continued to skyrocket to seven percent year over year, ABC and CBS’s evening newscasts ignored the Biden administration’s past predictions that inflation was simply “transitory” when reporting on the new numbers. Meanwhile, NBC Nightly News recalled how wrong the Biden White House has been in the past on the ongoing inflation crisis.

Also in the report, Alexander highlighted Lisa Giago, a single mother of three living in Colorado who is struggling to put food on the table to feed her children. In addition, Ishmael and Rochelle Wilson, a couple in Maryland who own a dry cleaners revealed to Alexander how much the cost of running their cleaners has skyrocketed:

ISHMAEL WILSON: This time last year we paid $24.50 for a box of hangers.

At the end of the segment, anchor Lester Holt sought an answer about when the Biden administration believed inflation would start to dissipate. In response, Alexander recalled a previous prediction Biden made on inflation: “Remember six months ago, President Biden insisted rising inflation was temporary. But tonight, the White House says these higher prices could last until the end of this year.”

Meanwhile, on the CBS Evening News, there was no reminder to their audience about Biden’s previous predictions on inflation. In fact, congressional correspondent Scott Macfarlane reported without any rebuttal from Republicans that “the White House today argued President Biden’s Build Back Better plan, which is still stalled in Congress, would help.”

Yeah, pouring trillions more dollars into the economy is the worst thing we could do to cool inflation down. Yet that point of view was never given air time during this segment.

On World News Tonight, anchor David Muir asked chief business and economics correspondent Rebecca Jarvis if the White House knew “how much longer will Americans have to deal with this,” referring to inflation.

Jarvis reported that “the White House along with many economists predict that these elevated prices will remain through the winter, but will moderate by year-end” while adding that “the Federal Reserve is also expected to hike interest rates four times this year to keep inflation from undoing the economy.”

To reiterate, there was no mention of the inaccurate predictions. Maybe because the media is embarrassed themselves for getting omitting the news of skyrocketing inflation.

This latest example of the liberal networks covering for their friends in the Biden White House was brought to you by WeatherTech (ABC), and Allstate (CBS). Their contact information is linked so you can let them know about the biased news they fund.

To read the relevant transcripts of each segment click “expand”:

LESTER HOLT: Good evening, everyone. Prices are up. Grocery inventories are low, and all roads lead through the bumpy COVID landscape. We got news today confirming what many of us have already seen for ourselves. Officially consumer prices rose by 7% in December compared to the year before. For perspective, inflation hasn’t climbed this quickly since the early ’80s. Lately, we’ve been paying more for almost everything from a gallon of gas to a pound of chicken. Supply chain issues reaching their chokepoint at the check-out aisle. And at the same time store shelves are once again thinning out. Grocery stores are running low on everyday items. We’re covering it all this evening, starting with the inflation impact and Peter Alexander.

PETER ALEXANDER: Tonight, the alarming spike in inflation soaring to its highest level in nearly 40 years, casting a shadow over America’s entire economy. The stunning surge in December, 7% over a year ago. The pace of inflation slowing slightly over last month still marking three straight months with inflation over 6%.

LISA GIAGO (Office Manager): It is bringing a lot of unnecessary stress, and it’s already a struggle, especially living paycheck to paycheck.

ALEXANDER: Lisa Giago is an elementary school office manager and a single mom of three in Colorado. Prices for gas and groceries are so high, like many Americans, she’s had to start relying on a food bank.

GIAGO: I’m fine. I can go with no meal a day, but I want to make sure that my kids at least have, you know, food in their bellies.

ALEXANDER: Inflation sending already sky-high prices soaring even higher across the board. Gas prices up 50% over last year. Used cars and trucks rising 37%. Meat, chicken, fish, and eggs 13% higher. Rent and mortgages going up 4%. Tonight nearly half of all small businesses say they’re having to raise their prices. When the bills come in, what do you say?

ALEXANDER: At their dry cleaning businesses in Maryland, Ishmael and Rochelle Wilson feel like they’re the ones being taken to the cleaners. Plastic bags, shoulder protectors, receipt paper, all costing way more.

ROCHELLE WILSON (Small Business Owner): And it’s cutting into everything that we need to do to grow and to sustain, quite frankly.

ALEXANDER: And on top of it, they’d already been struggling in the pandemic. So this Friday the Wilsons are shutting down one of their stores. The President today tweeting, “we are making progress in slowing the rate of price increases, but there’s still more work to do.” But Republicans are blasting the President with rising wages unable to keep up with record inflation.

SENATOR JOHN BARRASSO: Families are struggling. People that are hurt most, of course, seniors, people on a fixed income, young couples trying to get by, and it is the Biden policies.

HOLT: Peter, what is the White House saying tonight about how long this high inflation might last?

ALEXANDER: Yeah, Lester. Remember six months ago President Biden insisted rising inflation was temporary. But tonight the White House says these higher prices could last until the end of this year. Lester?

SCOTT MACFARLANE: Today’s report on inflation shows ground beef prices up 13%. Double-digit jumps in the price of eggs, crackers, and bread, breakfast cereal up 6%, and the milk you pour in it, up by more than 4%. The White House today argued President Biden’s Build Back Better plan, which is still stalled in Congress would help but acknowledged the pain isn’t going away any time soon.

BRIAN DEESE (National Economic Council Director): If you look at the projections by independent forecasters, then you see moderation over the course of ’22. In the short term, in the mediate term, I think there–we’ll focus on the practical steps that we can take, focus working with Congress.

DAVID MUIR: Rebecca, we know the White House was pressed on this today, of course, how much longer will Americans have to deal with this?

REBECCA JARVIS: Well, David, the White House along with many economists predict that these elevated prices will remain through the winter, but will moderate by year-end. And the Federal Reserve is also expected to hike interest rates four times this year to keep inflation from undoing the economy. David?

Lift Up Thine Eyes
After a Year of Scandals, Viewership at Pervert-Plagued CNN Down 90% From 2021
Shocking video shows backhoe rampage. Driver plows into cars and houses before being fatally shot by police.
Republican National Committee Finally Figures It Out – No More Biased Presidential Debates
Hundreds of Chicago students orchestrate school walkout and crowded protest to demand safer COVID-19 conditions, relief stipends, and laptops