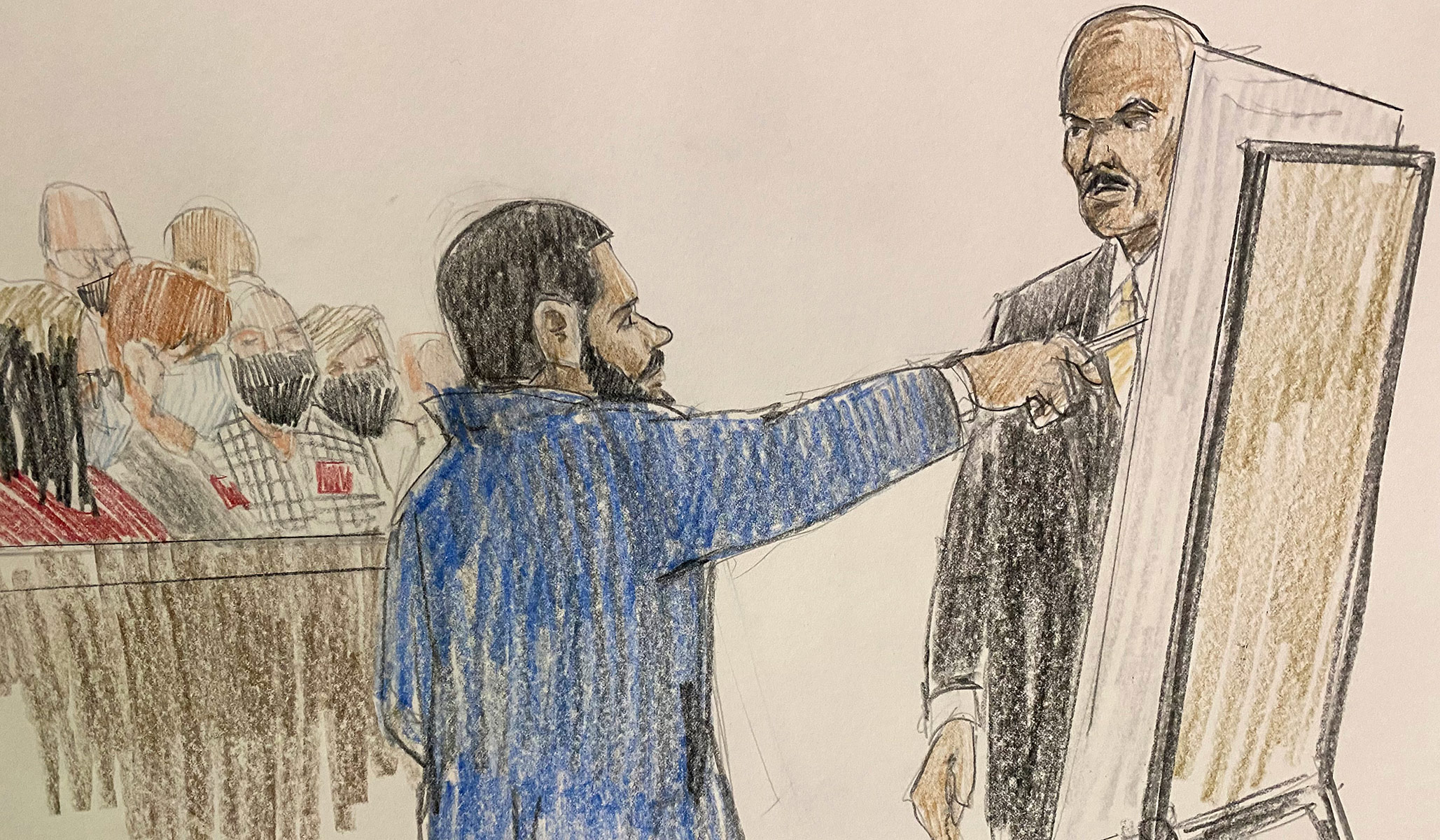 Chicago, Ill. — The second brother accused of conspiring with former Empire star Jussie Smollett to stage a racist and homophobic attack against him in 2019 told a jury Thursday that he agreed to participate because Smollett was a friend of his brother’s “and also to curry favor” with the successful actor, who might have been able to help him with his own fledgling acting career.

Olabinjo Osundairo called Smollett’s plan to make it look like he was attacked by two supporters of former president Donald Trump a “crazy idea” but agreed to participate anyway.

Smollett’s defense tried to paint Osundairo as an unreliable witness whose story has changed since he first spoke to authorities nearly three years ago. And they tried to cast him as homophobic, pointing out past comments that he had made on social media and in text messages, including using terms such as “fruity,” “gaylord,” and “sicko” to describe specific gay people. Smollett is openly gay.

In one particularly tense moment during defense lawyer Tamara Walker’s cross-examination, Smollett’s team called for a mistrial, unhappy with the way Cook County judge James Linn described Walker’s line of questioning about the allegedly homophobic posts and texts. Walker accused Linn of calling her questioning “unfocused” in front of the jury, and “lunging” at her during a sidebar. The defense also accused Linn of making “snarling” facial expressions from the bench during their cross-examinations. A clearly frustrated Linn said he was “stunned,” and he declared “there will be no mistrial.”

Olabinjo Osundairo followed his brother Abimbola on the witness stand during Smollett’s criminal trial. The two brothers are key witnesses for the prosecution because they are the ones who carried out the supposed attack and then exposed the alleged conspiracy after they were taken into custody by Chicago police about two weeks later.

The Osundairos claim Smollett planned the attack after receiving a racist letter in the mail at the Empire studio and didn’t believe the studio leaders were taking it seriously enough.

Both Osundairo brothers are aspiring actors who worked on Empire as extras or stand-ins. While Abimbola Osundairo considered Smollett a close friend, Olabinjo Osundairo did not. They’d only hung out a few times.

The brothers both told the same general story about Smollett’s approaching them about the plan, giving them a $100 bill to buy supplies (including a red MAGA-like hat), taking them through a dry run a day before the planned attack, giving them a $3,500 check, and directing them about how he wanted the attack to go down. They both said Smollett directed them to call him racial and homophobic slurs, punch him — but not too hard — douse him with bleach, hang a noose around his neck, and yell out “this is MAGA country,” referring to Trump’s slogan.

Detectives said previously that the brothers’ accounts checked out with other evidence, including surveillance footage, phone records, social-media posts, and text messages.

During her cross-examination, Walker noted that some of the testimony that Olabinjo Osundairo gave on Thursday differed from testimony he gave to police and to a grand jury in February 2019. For example, on Thursday Osundairo said he threw bleach on Smollett instead of gasoline, which is what Smollett initially wanted, because he was concerned about the safety of throwing gas on him. But in previous grand-jury testimony, Osundairo said he didn’t want to be seen on security cameras filling up a container with gas, Walker said.

Osundairo said his memory is clearer now, nearly three years later, because he’s under less stress. “I was telling the truth,” he said of his earlier testimony, “but I was just arrested at the airport and kept in jail for two days, so that was pretty stressful.”

Walker asked Osundairo, who has a master’s degree in finance, if he felt offended when Smollett allegedly asked him to stage an attack. He said that “at first I was kind of taken aback.” She also asked if it bothered him “as a black man” when he said Smollett asked him to put a noose around his neck. “I just don’t let things like that bother me,” Osundairo said. He also said he didn’t put the rope around Smollett’s neck, but instead around his face.

Osundairo acknowledged that he participated in the alleged attack to “curry favor” with Smollett, but he said Smollett never promised him future favors. “I just think if I did something for him, maybe in the future he would help us out,” Osundairo said.

“That was not the plan. Nobody was supposed to call the police,” he said.

Walker also tried to draw a connection between Osundairo and guns that police found in his family’s home. Olabinjo Osundairo was convicted of a felony in 2012 and can’t legally own or possess guns. But the guns in the family home all legally belonged to Abimbola Osundairo, the prosecution noted. Olabinjo Osundairo said he doesn’t live in the home but stays there often, keeps clothes and other items there, and uses it as his mailing address.

There’s no evidence that either Osundairo brother used a gun during the alleged attack.

Osundairo pushed back on allegations that he is homophobic. The terms he used on social media and in text messages were either used jokingly or were referring to a specific person he was angry with, he said.

The prosecution noted that both Osundairo brothers participated in a 2015 gay-pride parade in roles as shirtless Trojan warriors with swords. And Olabinjo Osundairo worked for several years as a bouncer at a bar in Boystown, a gay-friendly neighborhood in Chicago.

“I have no hate for anybody,” Osundairo said. “I believe in God, and God is love.”

Earlier in the day, Smollett’s defense lawyers attempted to paint Abimbola Osundairo as a social climber who befriended Smollett to further his own career and then attacked him as part of a plan to get the actor to hire him as a personal security guard. They alleged that Abimbola Osundairo wasn’t really Smollett’s friend but was his drug dealer, a characterization he denied.

The defense also alleged that Abimbola Osundairo was both homophobic and Smollett’s one-time boyfriend, both of which he denied.

The case rocked the nation in early 2019, with pundits and Democratic politicians pointing to the attack as evidence of bigotry rampant in Trump’s America. But in the weeks after the alleged attack, detectives became increasingly skeptical.

Smollett faces six counts of felony disorderly conduct for filing a false report. If convicted, he could be sentenced to as much as three years in prison but could also be let off with probation and community service.

The prosecution rested its case after Olabinjo Osundairo’s testimony. The defense immediately asked Linn to issue a direct not-guilty finding, claiming that the evidence showed Smollett was battered in the attack and that the prosecution didn’t provide enough evidence to prove that he filed a false police report. Linn denied the request and said there are “ample facts” for the jury to consider.

The defense called its first witnesses Thursday night: Smollett’s former music manager, who was on the phone with him when the alleged attack occurred, and the emergency-room physician who treated Smollett that morning. Dr. Robert Turelli testified that Smollett suffered real injuries during the alleged attack, but none of the injuries was traumatic.

Smollett’s one-time Los Angeles-based publicist Pamela Sharp testified that media attention made Smollett “anxious” and that he didn’t like to have a lot of security around him. Smollett, she said, was earning at least $100,000 per episode of Empire, and his career was going “very good. Actually, things were great” before the alleged attack. She said an actor’s face and appearance are “key” to a career, and it didn’t make sense to stage a hate crime that could harm his appearance.

Prosecutors noted that Sharp is a public-relations agent, once paid $3,500 a month by Smollett to make him look good in the press, and she was not in Chicago the day of the alleged attack.

Judge Linn said Thursday that the trial would resume Monday. It’s unclear if Smollett will testify.