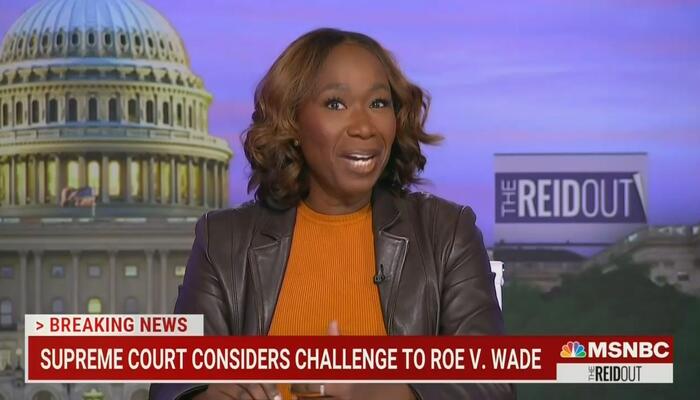 Wednesday’s The ReidOut was a episode to behold as MSNBC host Joy Reid was beside herself over the Supreme Court’s oral arguments about Mississippi’s 15-week abortion ban, calling it a warning for all “166 million women living in America” that the Court could “reduce you to a secondary constitutional citizen” and force them to “leave the babies on the doorstep of the firehouse” by refusing to treat pregnancy as seemingly just shy of a nuisance on society.

And matters were made worse by The Nation correspondent and frequent MSNBC guest Elie Mystal, who ghoulishly claimed “a fetus is not deserving of full personhood rights” because doing so “diminish[es] the rights of women” yet hilariously (and inadvertently) made accurate summations of pro-life arguments and painted them in terms that seem entirely normal.

Reid was unglued from the get-go:

[I]f you happen to be one of the 166 million women living in America, it appears that the conservative majority on the Supreme Court is willing to reduce you to a secondary constitutional citizen by decreeing that control over your very person, your physical body, belongs not to you, but to your state.

Reid also showed her devotion to abortion and race in refusing to recognize human life in its simplest form, regardless of whether it involves unborn children or Americans who were previously denied the full blessings of America:

Far more disturbing and, frankly, offensive was the Mississippi solicitor general arguing that the court should overturn Roe v. Wade, which protects women’s rights, because the court had previously overturned Plessy v. Ferguson, which restricted the rights of African-Americans to participate in normal civic life without being subjected to segregation up until 1954 when it was negated by the landmark decision in Brown v. the Board of Education.

Mystal soon cropped up and, again, while arguing unborn children don’t deserve rights because it would mean women would be deprived of them, he suffered an incredible self-own (click “expand”):

Conservatives want you to think that a fetus — a fetus who is pre-viability, it means it cannot exist outside of its mother, it cannot live outside of — of the womb, has the same — should have the same legal rights as full-grown Black people in this country and that the fact that it doesn’t is some kind of miscarriage of justice — no pun intended — and that the people who shouldn’t have the full rights are the women who are carrying the fetus. Now, I can prove that a fetus is not deserving of full personhood rights because, if it were, they would be arguing that the fetus should be given citizenship, they would be arguing that the fetus should have other rights like a right to education, a right to health care. They would be arguing that I should be able to claim fetuses as dependents on my taxes, which you will note they’re not.

They are only concerned about the right of a fetus when that right can be used to diminish the rights of women and that is what the conservatives are all about on the Supreme Court…[T]he person who looks like as much of an idiot as much as anybody today is Susan Collins, who stood up there on the Senate floor and promised us that Brett Kavanaugh of all people was going to respect precedent, that he was going to respect settled law, that he believed that Roe v. Wade was settled law.

While Mystal framed giving unborn babies rights as a bad thing, many people pointed out in reacting to this segment that, aside from the asinine claims about right of babies coming at the expense of women, this is indeed what pro-lifers want.

What was less amusing was Mystal’s second bender as he tried to argue babies can’t be given “rights” because a women’s right to an abortion is an “inalienable” right (click “expand”):

As usual, Brett Kavanaugh brings the most intellectually weak arguments to the debate, right? So, his argument about neutrality is ridiculous on its face. You can’t be neutral about rights, either women have rights to their own bodies or you don’t. There’s not a neutral position in there. You have to decide whether they have rights or they do not. Now, we already discussed how his whole framework involves creating a right to a fetus in order to find this neutrality a fetus that doesn’t have rights and I can prove that, again, legally. But then you point out the other — the other important point, that — that — that the whole point of a right — I’m sure I heard it somewhere called inalienable, right? The whole point of a right is that it can’t be taken away by state legislators on an ad hoc basis.

I don’t want Mississippi to decide whether or not I have the right to vote or walk or breathe or marry or have control over my body. That’s not — that’s against the definition of a right. But there’s a third thing that Kavanaugh is doing and it’s very important, I think, cause it also goes to his whole personality from where I sit. He’s trying to shift responsibility away from the Supreme Court towards the states.

Turning to Congresswoman Ayanna Pressley (D-MA), Reid said she had to tell her “as a fellow black women, as a sister” that “it made me feel some kind of way” to hear “two men, Clarence Thomas and Brett Kavanaugh, who were credibly accused of violating the sanctity of woman, you know, both got away with it….stand up and sort of soberly argue whether or not women are owned by the state.”

Mississippi’s defense of their 15-week abortion law makes a case that’s truly bizarre, arguing that things are different than they were back in the ‘70s, that: “Today, adoption is acceptable and on a wide scale women attain both professional success and a rich family life.” So, why can’t we just force poor women and rape victims to bring fetuses to term? I mean, can they not just leave the babies on the doorstep of the firehouse and get back to the office?

And going on about how “pregnancy can actually be dangerous to a woman’s health, especially when you live in a country like the United States,” she again touted a future in which new moms flock to firehouses to ditch their babies:

To say it’s fine, make them carry the baby to term, they can leave it at the firehouse when they’re done is so dismissive of everything that pregnancy is about, that it was shocking to me.

And to complete the cartoonish resume, Reid later said “this movement shouldn’t be called pro-life” as “[i]t should be called get them born and then it’s your problem.”

Joy Reid’s idolatrous support for murder and Mystal’s denunciation of babies being undeserving of rights was made possible thanks to the endorsement of advertisers such as Amazon, E-Trade, Liberty Mutual, TD Ameritrade. Follow the links to see their contact information at the MRC’s Conservatives Fight Back page.

To see the relevant MSNBC transcript from December 1, click here.