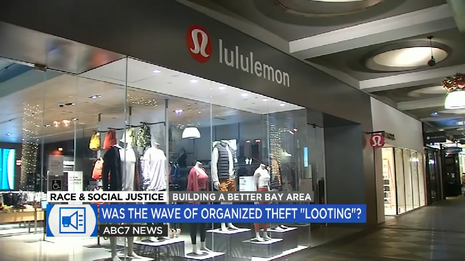 In the wake of outbreaks of mass organized looting in the San Francisco Bay area, a new word has entered the taboo list for the woke liberal media: ”Looting.” According to ABC7 News Bay Area TV Race and Social Justice reporter Julian Glover, it is wrong to use the word “looting” instead of “robbery” or “theft” because “looting” connotes “people of color.”

Here is their television report on why it is the new no-no to refer to accurately report looting as such:

This topic is of such importance to ABC7 News that they even elaborated on it on their website:

We saw similar crimes happen in the wake of the George Floyd protests, but are the past weekend’s crimes truly considered looting?

Race and Social Justice Reporter Julian Glover is here to give us some context of looting.

“As the Bay Area grapples with a wave of seemingly organized smash and grab robberies this weekend, policing and journalism analysts are cautioning against the use of the term looting,” Julian says.

Chief Scott was detailing his department’s response to a wave of potentially organized retail thefts and burglaries netting a million dollars in stolen luxury goods.

A San Jose Police Department spokesman updated the media on incidents of theft occurring in the South Bay over the weekend.

“We are talking about two incidents, we’re not going to call this looting. This is organized robbery. That’s what it is,” said Sergeant Christian Camarillo, public information officer for San Jose Police.

Camarillo was referring to the $40,000 in merchandise stolen from Lululemon in Santana Row Saturday.

But according to the California Penal Code, what we saw was not looting.

The penal code defines looting as “theft or burglary…during a ‘state of emergency’, ‘local emergency’, or ‘evacuation order’ resulting from an earthquake, fire, flood, riot or other natural or manmade disaster.”

You might not like the term “looting” but the Merriam-Webster dictionary defines it as “to rob especially on a large scale and usually by violence or corruption.”

And now we come to the reason for the animus towards the term “looting”:

The penal code defines looting as “theft or burglary…during a ‘state of emergency’, ‘local emergency’, or ‘evacuation order’ resulting from an earthquake, fire, flood, riot or other natural or manmade disaster.”

To some, the distinction may be small, but Lorenzo Boyd, PhD, Professor of Criminal Justice & Community Policing at the University of New Haven, and a retired veteran police officer, emphasized that words matter.

“Looting is a term that we typically use when people of color or urban dwellers are doing something. We tend not to use that term for other people when they do the exact same thing,” said Boyd.

So, if an employee of ABC7 News uses the term “looting” in a future report, will that be cause for termination?

GOP Rep. John Katko, one of the House Republicans who voted to impeach Trump last year, announces that he will not seek another term in Congress
Is Jeopardy! Too Professional?
Fauci’s Financial Disclosures Released: “Career Civil Servant” And Wife Worth $10.4 Million
5 Celebrities Who Damaged Their Brands by Getting Political
New Manhattan DA Says Office Confronting Gun-Crime Spike