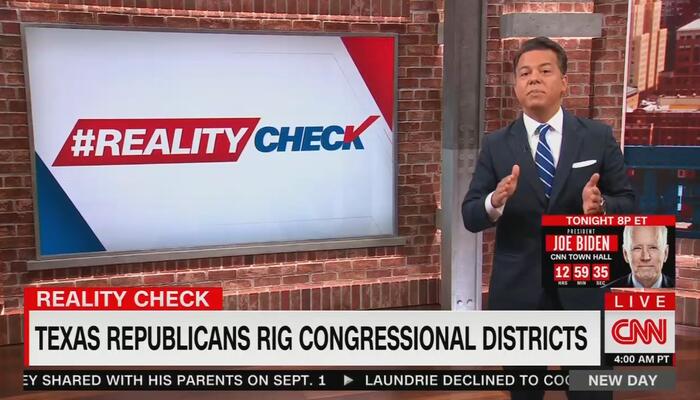 The liberals at CNN want you to believe that they care about upholding democracy, but the evidence shows that they turn a blind eye when it’s the Democrats rigging the system.

On Thursday’s “Reality Check” on New Day, John Avlon dramatically proclaimed: “Defending democracy doesn’t take a day off.” He then went on to complain about Republican congressional redistricting while ignoring the blatant gerrymandering happening in states run by Democrats.

Texas, which gained two congressional seats after the most recent census, was Avlon’s main target: “[Republicans] weren’t about to make the congressional districts more representative of the actual electorate. No. So they went to work drawing districts that artificially increased their own advantage, connecting suburban districts with sprawling, rural communities, consolidating minority-heavy areas and generally painting Texas red.”

Avlon next called the proposed congressional map a “blatantly partisan, pro-white map,” accusing the Texas GOP of intentional racism and discrimination. Not only that, but Republican opposition to election reform bills and so-called independent redistricting commissions was deemed to be “more evidence of Republicans’ discomfort with majoritarian democracy,” according to Avlon.

Unsurprisingly, neither Avlon nor New Day co-host John Berman brought up the obviously partisan redistricting proposals in states like liberal Illinois, which will lose a congressional seat. The proposed new congressional map for Illinois was so unfairly partisan, benefiting Democrats, that it received criticism from both sides of the political aisle.

Avlon accused Texas of being “a textbook case of politicians choosing their voters rather than voters choosing their politicians,” but didn’t have a single word on the transparent attempts of Illinois Democrats to slash Republican power.

“Simple majorities can pass intentionally unrepresentative partisan maps in the states. Either way, the will of the people is once again being trumped by the rigged system of redistricting, making real representative democracy the only sure loser,” he concluded.

Anyone could say the same thing about the Democrats, who have actually been exposed in federal court for their shenanigans; you won’t hear anything about that on CNN’s laughable “Reality Check.”

This CNN segment was sponsored by Mercedes-Benz and IHOP.

Read the full segment transcript below by clicking Expand:

JOHN BERMAN: Major new developments in the effort to grab congressional seats. And it’s all happening in broad daylight in Texas. John Avlon with a “Reality Check.”

JOHN AVLON: Defending democracy doesn’t take a day off. And yesterday Senate Republicans stonewalled Joe Manchin’s compromise election reform bill. He’d spent months trying to gain their support with a balanced package that included national standards for early voting, including vote by mail, disclosure requirements for dark money groups, and even voter ID, a long time GOP priority. But not a single Republican decided to join that effort, let alone the 10 needed to overcome the filibuster to even start a debate. It was just more evidence of Republicans’ discomfort with majoritarian democracy.

But Washington is just one front in this fight. The real action is occurring in the states, where legislators are busy drawing congressional districts to benefit the party in power. And Texas just showed how rigged the system really is. You see the lone star state gained two congressional seats after the latest census due to massive population growth in urban areas, 95 percent of which is attributable to people of color. But Republicans controlled the state legislature. They weren’t about to make the congressional districts more representative of the actual electorate. No. So they went to work drawing districts that artificially increased their own advantage, connecting suburban districts with sprawling, rural communities, consolidating minority-heavy areas and generally painting Texas red.

Now, keep in mind that Donald Trump won 52 percent of the vote in Texas. But the new map would give Republicans a lock on 66 percent of the congressional seats, that’s according to an analysis by FiveThirtyEight. It increases the number of Republican-dominated districts from 22 to 25, while reducing the number of districts in which Hispanics make up a majority of the electorate, from eight to seven. And, again, that’s despite Hispanics now being roughly equal to the non-Hispanic white population in Texas.

And that’s not all. They actually dropped the number of districts where African-Americans make up a majority from a grand total of one to 0. In the process they made districts less competitive, pushing more power to the partisan primaries. It is a textbook case of politicians choosing their voters rather than voters choosing their politicians.

And it’s all on top of that voter suppression efforts in Texas lawmakers passed through special session of legislature. And just in case you think that voter integrity is the impetus for any of this, listen to Texas Rep. Justin Holland talking about the Democrats.

AVLON: And lo and behold, that’s what happened. There’s already a legal challenge to this blatantly partisan, pro- white map. Echoes of a decade ago when Republicans were found to have intentionally discriminated against blacks and Hispanics and redistricting there. Texas isn’t the only state trying to suppress representative results. A few years ago North Carolina got its race-based gerrymandering thrown out by the courts. [Indistinct] Republicans in the state legislature there, from taking a state with a one-point spread in the 2020 election and trying to build on their current eight to five congressional seat advantage. Over 70 percent of Ohio has voted for district reforms in 2015, but their wishes are being stymied at the state capitol. In Virginia, currently under Democratic control, a bipartisan redistricting commission has hit a stalemate. While in New York, a new independent redistricting commission has failed to get bipartisan support.

What’s clear is that while a minority of Republicans can block federal election reforms in Washington, simple majorities can pass intentionally unrepresentative partisan maps in the states. Either way, the will of the people is once again being trumped by the rigged system of redistricting, making real representative democracy the only sure loser. And that’s your Reality Check.

Ghislaine Maxwell ordered housekeeper to bring two underage girls to Epstein mansion, New York trial hears
November Job Numbers Puzzling, but Economic Growth is Strong
COMEDY: Washington Post Columnist Claims Press Is Tougher On Biden Than They Were On Trump
The Biden Administration Has No Interest in Combating China
Democrats Will ‘Rue The Day’ They Played Games with Committee Assignments