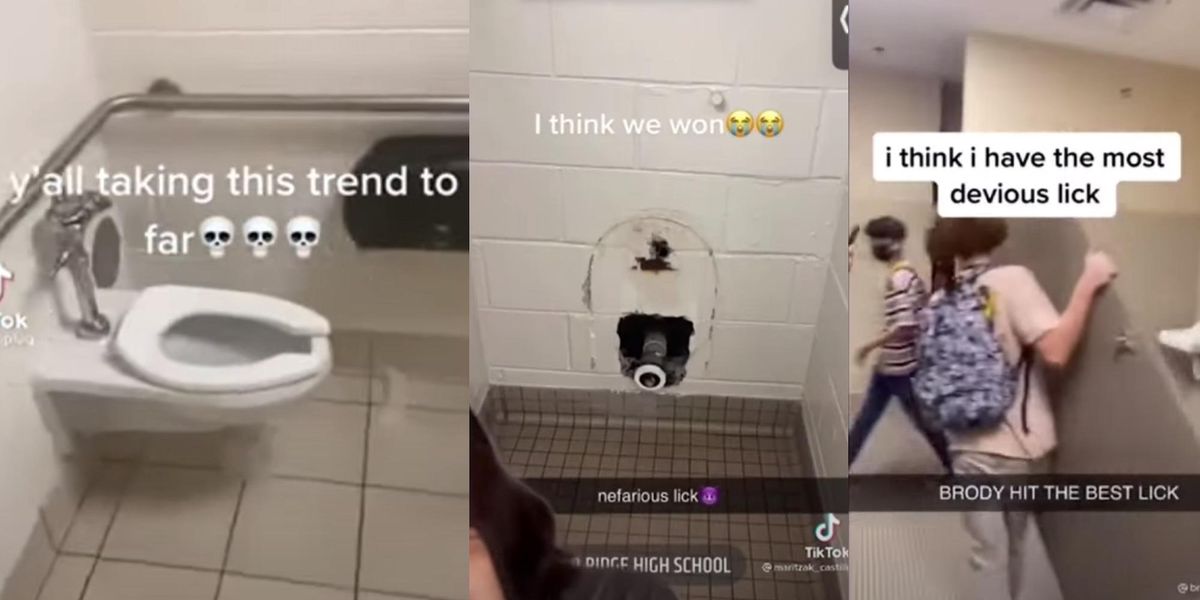 A destructive TikTok challenge is leading to students across the nation being charged with vandalism after the social media trend made it popular to destroy school equipment.

The “devious lick” challenge started with a TikTok video that showed a student showing off a soap dispenser that they had ostensibly stolen from their school.

Other students are doing the same and causing damage in schools across the country. They steal soap and paper towel dispensers, urinal screens, bathroom mirrors, and one participant even claimed a toilet was stolen.

One of the harder hit schools is Hart High School in Santa Clarita, California, where the principal is considering shutting down the bathrooms and having students go to port-a-potties instead.

The principal sent a letter to parents informing them that he had suspended several students for vandalism related to the TikTok challenge.

And he’s not the only one.

In Virginia, the Stafford County Sheriff’s Office said a student vandalized a park bathroom and is facing criminal charges.

In Arizona, the Bullhead City Police Department said a 15-year-old was arrested for theft of a school toilet paper dispenser.

In Kentucky, the Boone County Sheriff’s Office said 8 juveniles were charged with offenses related to the challenge.

In Florida, Polk County Officials arrested at least three students for the same.

Hillsborough County Schools spokesperson Erin Maloney said that vandalism is skyrocketing at their schools because of the TikTok trend.

She told WTSP-TV that not all students are criminally charged over the vandalism.

“We really don’t want to ruin a kids life over what they perceive to be a prank,” said Maloney. “Our goal is to really educate them and let them know they are making bad choices and while this may seem like it’s funny because your friends might be doing it online, vandalism is serious and we are going to treat it that way.”

TikTok says they have removed content from their platform related to the trend and anyone searching for the videos will see an error message.

Beyond the danger of some of the more dangerous TikTok challenges, security experts have warned against the use of the social media app over privacy concerns related to the communist Chinese government. They claim the app could be used by the authoritarian government to obtain private information from users.