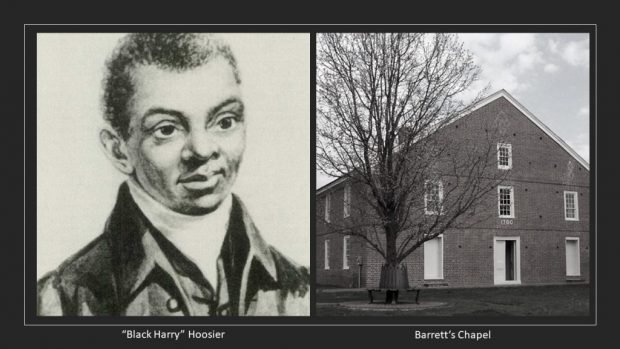 If you listen to the warped Left-Wing media or are a product of the American indoctrination institution we call the American Education System, you likely have never heard of Harry Hoosier. His story dates back to Eighteenth Century Colonial America. David and Tim Barton note in, The American Story, that Harry was born in North Carolina in 1750. As many blacks in the American South, Harry was born a slave.

Historian Larry Schweikart, in a book that every Patriotic American should own, A Patriot’s History of the United States, notes that the clergy, as well as doctors and lawyers in America at the time of the First Great Awakening (1734-1741), “grew less intellectual and more pragmatic.” Schweikart writes, “Saving souls was more important to them than preaching doctrine, and a college education in theology became optional if not irrelevant or even, later, an impediment to sound doctrine.” This was still the case throughout Harry Hoosier’s life.

Webb writes that the informal nature of the Methodist revival gatherings were attractive to blacks because “they were permitted to participate alongside whites.” The early Methodist leadership took a strong stand against slavery. Webb writes, “The Methodist message of personal holiness cut across racial, social, and economic lines, and a few of the most gifted blacks who joined the movement were encouraged to become preachers.”

This is were Harry Hoosier was to make his mark in history for the first time. Harry was illiterate but he was a magnificent orator. So much so, that Founding Father Benjamin Rush, a Signer of the Declaration of Independence, declared Harry as, “the greatest orator in America,” writes historian Abel Stevens in his 1864, History of the Methodist Episcopal Church in the United States of America. Francis Asbury (1745-1816), a famous Methodist evangelist, traveled far and wide preaching to the crowds, taking Methodism to the American frontier. Asbury took-on Harry as a traveling companion and even wrote about him in his journal. While Asbury preached to white people, Harry preached to slaves. Webb writes that Harry sometimes substituted for Asbury when he was sick. But soon, even whites wanted to hear Harry’s message and stayed late listening to Harry preach since he was scheduled to preach after Asbury. In his Journal, Asbury writes, “the white people looked on with attention.”

Webb notes that, “By all accounts, his white audiences liked what they saw and heard.” Harry was most “famous for his ability to bring his audience to a climactic pitch of emotional tension.” He also “made significant contributions to the evangelical style of worship” in America. Reverend George Raybold in his 1849, Reminiscences of Methodism in West Jersey, writes that, “Black Harry,” as he was sometimes referred to, “was of middling stature; slim, but very strongly built, and very black; capable of great labour and much endurance. He also possessed a most musical voice, which he could modulate with the skill of a master, and use with most complete success in the pathetic, terrible, or persuasive parts of a discourse.” Rev. Raybold continues:

Harry could remember passages of Scripture and quote them accurately; and hymns, also, which he had heard read, he could repeat or sing. He was never at a loss in preaching, but was very acceptable wherever he went, and few of the white preachers could equal him, in his way. When he was questioned as to his preaching abilities, complete command of voice, aptness in language, and free delivery, as to Scriptural and doctrinal truth, his reply was a description of the Elocution of Faith: ” I sing by faith, pray by faith, preach by faith, and do every thing by faith; without faith in the Lord Jesus I can do nothing.”

Later in life, Harry had a period of addiction to the wine served at church. Webb writes that “Whatever the cause of his decline, Hoosier had the strength of character to break the habit. He soon resumed preaching in Philadelphia, where he was always in high demand.” Harry died in 1806 and “was borne to the grave by a great procession of both white and black admirers, who buried him as a hero, once overcome, but finally victorious.”

By the late 18th century and early 19th century, 1/5 of all Methodists in America were blacks. Hoosier preached to blacks and to whites but not all were happy about this practice. In fact, Webb notes that “many whites found this integration of the races to be profoundly disturbing.” He adds, “It is probably no coincidence that the derogatory use of the term Hoosier begins to appear at the time of Hoosier’s ministry.” Furthermore, Hoosier’s congregations were “rural and unsophisticated,” composed of a mix of races, which “would have prompted hostility and ridicule.”

Webb writes that “on the Appalachian frontier the term Hoosier became slang for people who were uneducated, so uneducated that they would follow a black minister.” As per the Association of Religion Data Archives (ARDA), Indiana ranks 13 out of the 48 contiguous United States in adherents to Methodism as per 2010. Historian William Piersen notes that the name “Hoosier” settled on the inhabitants of the free and more Methodist territory of Indiana after passing lightly over the similarly uncouth frontiersmen in North Carolina, Tennessee, and Kentucky who were also called ‘Hoosiers.’”

The etymology of Hoosier, writes Piersen, “[offers] Indiana a plausible and worthy first Hoosier–‘Black Harry’ Hoosier–the greatest preacher of his day, a man who rejected slavery and stood up for morality and the common man.” Webb writes that by the mid-nineteenth century, the citizens of Indiana had transformed the “label of abuse and disparagement” for the name Hoosier “into a badge of pride and identity.” Webb concludes, “People in Indiana take pride in having the most distinctive state nickname, but they can be yet prouder of the person whose name it was.”

Harry Hoosier’s story is little known to Americans, including the citizens of Indiana. Harry was an American hero who used his gifts to bring others to God and spread evangelism from civilized society to the depths of the American frontier. Scholars mentioned in this article agree that Indiana’s nickname as “The Hoosier State,” is most likely due to the exploits of American evangelist, Harry Hoosier.