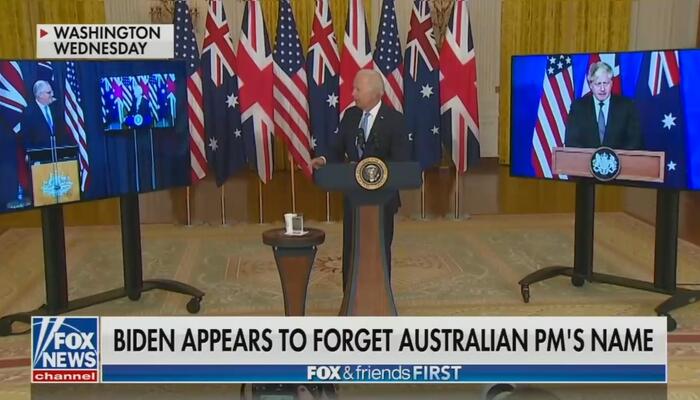 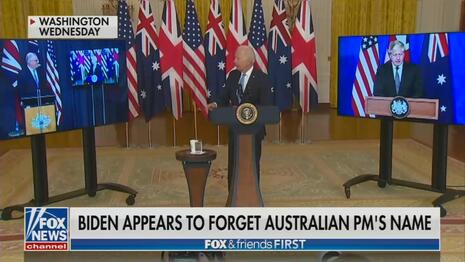 Another day, another Joe Biden senior moment for the press to ignore. The President on Wednesday forgot the name of Australian Prime Minister Scott Morrison as he met virtually with leaders to discuss a new defense deal with the U.K. and Australia. After British Prime Minister Boris Johnson finished speaking, Biden stumbled, “Thank you, Boris and [pause] I want to thank that fella down under. Thank you very much, pal.”

You would think that forgetting the name of one our closest allies, while talking to him, might be a news story. But you would be wrong. The outlets that reported on the new deal skipped the “fella down under” part. CNN Newsroom Live on Thursday covered the deal for 4 minutes and 53 seconds, but never mentioned the cringe-y moment.

Fox News, however, covered the gaffe. Fox and Friend First’s Todd Piro wondered, “What does it do for international relations when our President can’t remember the name of one of our strongest allies?”

PBS NewsHour on Wednesday covered the meeting of the three leaders for 5 minutes and 20 seconds, never mentioning the latest Biden gaffe. On the morning shows, CBS This Morning and NBC’s Today opted for the safe route and avoided Australia completely.

But, of course, GMA skipped the actual Biden blunder. In March, when Biden blanked on the name of his Defense Secretary Lloyd Austin, Snopes.com spun that the President didn’t “literally” forget.

And don’t think the Australians missed this. The Australian, a leading paper in the country, noted it in the first sentence:

In a historic joint announcement with the United States and the United Kingdom detailing Australia’s nuclear transition, Prime Minister Scott Morrison has been called “that fellow Down Under” by President Joe Biden.

During the press conference, which featured leaders from all countries in their respective capital cities, Mr Biden thanked “that fellow Down Under” for bringing the countries together.

Wasn’t this new administration supposed to repair relations with our allies? Shouldn’t journalists be concerned about this?

Facebook and the Law
WashPost Stealth Edited Loudoun Rape Story, ‘Gender-Fluid’ Attacker
Yes, Biden Is Proposing That the IRS Spy on Your Bank Records
Five Reasons Not to Vaccinate Your Kids From COVID
ABC’s Roberts Whines to Jill Biden About Loss of ‘Free’ College in Dem Spending Binge