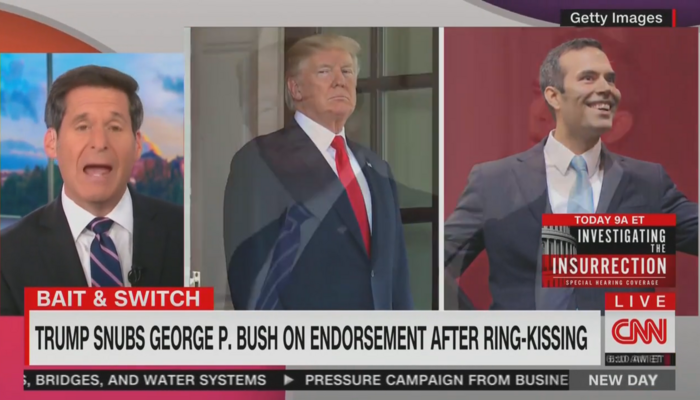 At one point, Berman said that Bush spent weeks

“desperately, adamantly, passionately prostrating himself before the former president. Kissing the ring—or the Latin equivalent.”

The Latin equivalent of ring to which Berman was presumably alluding could be “anulus,” and “kissing the ring” translates into “osculatus anulum.” Berman also seems to be mocking the Roman Catholics here, with the tradition of kissing the ring of the Pope.

But even the anulus allusion was insufficient snideness for Berman and sidekick Brianna Keilar. The segment aired a classic Peanuts clip of Charlie Brown attempting to kick the football, only to have Lucy snatch it away, with Charlie tripping and landing flat on his back. Berman helpfully informed the audience: “Charlie Brown is a metaphor for George P., just so people know. Everyone on Earth knew what was going to happen, except for apparently George P. Bush.” 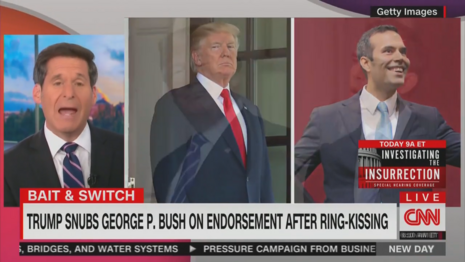 Berman and Keilar then mocked a George P. campaign koozie featuring likenesses of him with Trump. Berman snidely wondered what would be done with the koozies now, with Keilar suggesting they’d make collectors’ items that she and Berman would like to have.

Berman concluded the segment by suggesting that George P. might want to have a new koozie made, featuring Trump’s term for him: “My Bush.” Keilar enthused: “that’s a great koozie. I love it. I love it.”

Were Berman and Keilar stooping for a double-entendre perhaps more vulgar than even “anulus?”

JOHN BERMAN: So, new this morning, the man that Donald Trump refers to as “my Bush,” now he could call him my diss. George P. Bush, who is running for attorney general in Texas, has spent weeks desperately, adamantly, passionately prostrating himself before the former president. Kissing the ring—or the Latin equivalent—in an apparent effort to win Trump’s endorsement.

This of course is particularly notable since Trump has spent years attacking the Bush family, and brutalizing George P.’s father, Jeb Bush. But no humiliation was too much for George P. to forsake his family in the name of politics.

Bush met with Trump recently in New York, tweeted out this picture. There was a campaign koozie made. Now, when there’s a koozie, you know it’s serious. In some cultures, I think that’s a binding legal agreement.

A source tells CNN that during one meeting that Bush had with Trump, Trump assured him that he would stay out of the attorney general race. But this source also noted that was never going to happen, and you know what, it didn’t. Overnight, Trump announced that he is backing Ken Paxton in the race for attorney general. Humiliation complete. Another source compared the situation to this.

CHARLIE BROWN: This time I’m going to kick that football clear to the moon! [Lucy snatches football and Charlie trips and falls]

LUCY: Isn’t it peculiar, Charlie Brown, how some traditions just really fade away.

BERMAN: — for George P—just so people know. Everyone on Earth knew what was going to happen, except for apparently George P. Bush. And I just, I don’t know what you do with the koozies now.

He wanted to make a big deal in this race about Paxton’s character. Right? He’d been indicted, he’d been accused by top aides, former top aides, of bribery. And yet the character that I think that really got drawn, you know, really brought into question here, was actually George P. Bush’s.

BERMAN: Maybe George P. needs to get a new koozie that says My Bush, which is what, again, Donald Trump calls him.