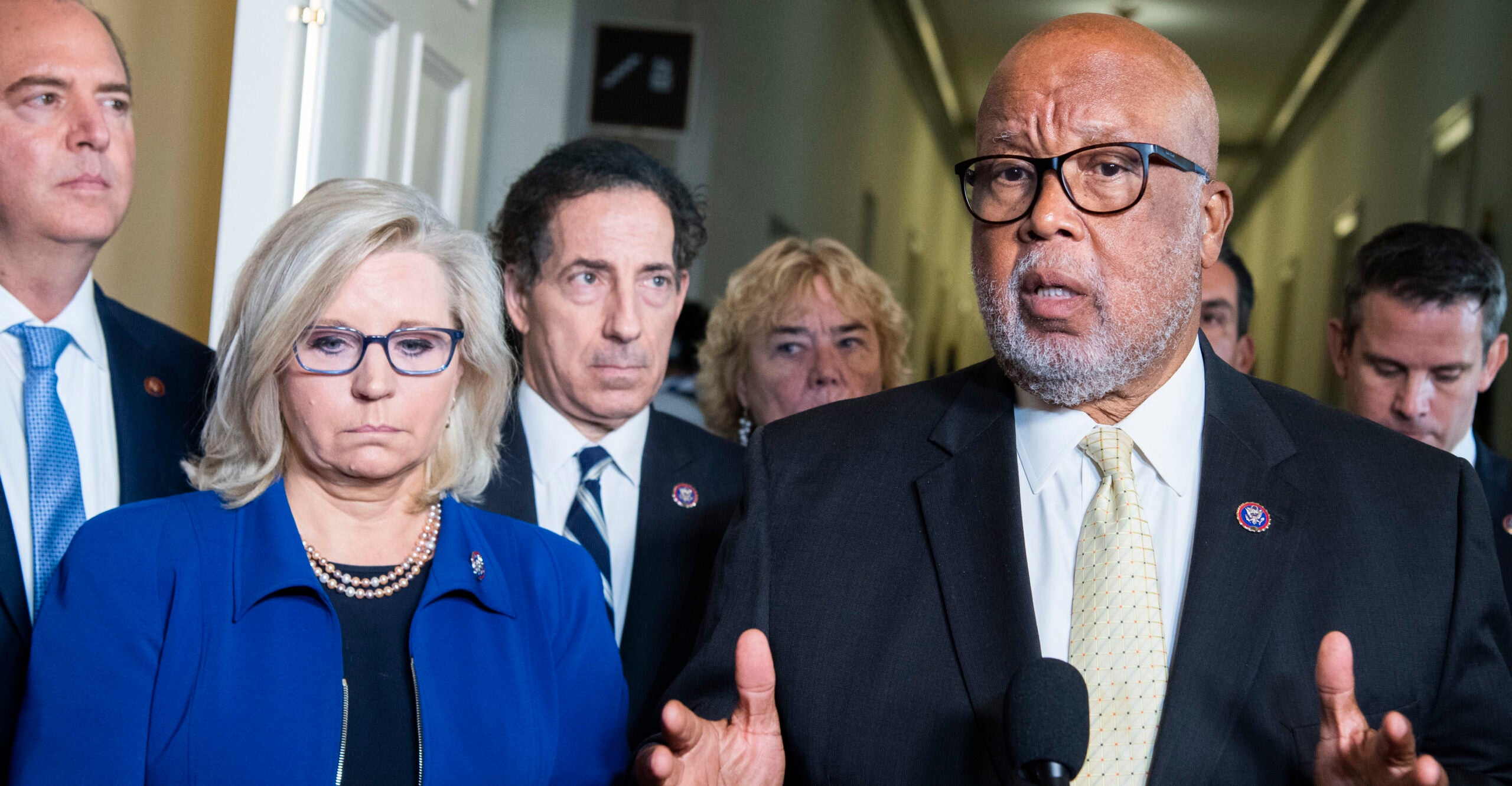 Four police officers testified Tuesday about their experiences during the Jan. 6 riot at the Capitol, as the House select committee investigating the attack held its first hearing on the incident.

Meanwhile, at least a dozen defendants have agreed to cooperate with law enforcement. The FBI has said it hasn’t identified more than 300 other people suspected of engaging in acts of violence during the riot.

Here are six takeaway from the first hearing by the committee.

During his opening remarks, Chairman Rep. Bennie Thompson, D-Miss., said a “peaceful transfer of power has stood as a pillar of our democracy” in transitioning from one president to the next.

“While our institutions endured, and while Joe Biden is the legitimately elected president of the United States, a peaceful transfer of power didn’t happen this year. It did not happen. Let that sink in,” Thompson said. “A violent mob was pointed toward the Capitol and told to win a trial by combat.”

During a Jan. 6 speech, former New York Mayor Rudy Giuliani, a lawyer for then-President Donald Trump, used the phrase “trial by combat” to oppose the certification of Biden as president.

Thompson went on to quote one rioter who said, “We were just there to overthrow the government.”

“They marched on the Capitol with the clear intention of stopping the certification of the election,” he said. “And when they encountered the police sworn to keep us safe, they went on the attack. With bear-repellent spray, knives, tasers, hockey sticks, even flag poles fashioned into clubs with the American flag still attached.”

Rep. Liz Cheney, R-Wyo., one of the two Republicans on the select committee, said the incident needed to be investigated.

Cheney suggested she wanted to know what Trump was doing in the White House during the riot.

“We must know what happened here at the Capitol,” Cheney said. “We must also know what happened every minute of that day in the White House—every phone call, every conversation, every meeting leading up to, during, and after the attack.”

Without answers, she said, “this will remain a cancer” on the republic.

“We will face the threat of more violence in the months to come, and another January 6th every four years,” Cheney said.

McCarthy criticized Cheney and Rep. Adam Kinzinger, R-Ill., both of whom were appointed to the committee by the House speaker, as being “Pelosi Republicans.”

Cheney defended her role on the committee.

“I have been a conservative Republican since 1984, when I first voted for [President] Ronald Reagan,” Cheney said. “I have disagreed sharply on policy and politics with almost every Democratic member of this committee.

“But, in the end, we are one nation under God. The Framers of our Constitution recognized the danger of the vicious factionalism of partisan politics, and they knew that our daily arguments could become so fierce that we might lose track of our most important obligation—to defend the rule of law and the freedom of all Americans.

“That is why our Framers compelled each of us to swear a solemn oath to preserve and protect the Constitution.”

Thompson asked Capitol Police Sgt. Aquilino Gonell, who served in Iraq in the U.S. Army, to compare what he experienced in a war with his experience on Jan. 6.

The officer responded that in Iraq, he primarily had to remove roadside bombs, but the attack on the Capitol was more constant.

“My time, compared to Iraq, totally different. These are our own citizens,” Gonell said. “People who we swore an oath to protect, but yet they are attacking us, with the same flag that they claim to represent. It was bad.”

The rioters didn’t seem to care about his veteran status, he noted.

“The rioters called me a traitor, a disgrace,” he said. “And shouted that I—an Army veteran and police officer—should be executed.”

Cheney asked about Trump’s claim that the Jan. 6 crowd was full of love, “hugging and kissing.”

“Officer Gonell, when you think about that and share with us the vivid memories of the cruelty of the assault that day and then you hear former President Trump say, quote, ‘It was a loving crowd. There was a lot of love in the crowd,’ how does that make you feel?”

In recently released audio of an interview Trump gave to Washington Post reporters, however, Trump’s “loving” reference doesn’t appear to be about the rioters. Tens of thousands came to the rally, of whom only about 800 broke into the Capitol. In the same interview, Trump said he didn’t mean to tell supporters to go to the Capitol building. But Trump also said, “Capitol Police were ushering people in, the Capitol Police were very friendly.”

Gonell responded to Cheney’s leading question with a memorable line.

“It’s upsetting. It’s a pathetic excuse for his behavior, for something that he himself helped to create, this monstrosity,” he said. “I’m still recovering from those ‘hugs and kisses’ that day.”

“If that was ‘hugs and kisses,’ then we should all go to his house and do the same thing to him,” he added. “To me, it’s insulting and demoralizing, because everything we did was to protect everyone in the Capitol from getting hurt.”

Gonell subsequently apologized for suggesting that anyone go to Trump’s house with ill intent.

Metropolitan Police Officer Michael Fanone, who was assaulted by rioters, condemned lawmakers who minimized the attacks.

“What makes the struggle harder and more painful is to know that so many of my fellow citizens, including so many of the people I put my life at risk to defend, are downplaying or outright denying what happened,” Fanone said.

He said that he “went to hell and back” to protect members of Congress and that the “indifference shown to my colleagues is disgraceful.”

“My law enforcement career prepared me to cope with some of the aspects of this experience,” Fanone said. “Being an officer, you know your life is at risk whenever you walk out the door, even if you don’t expect otherwise law-abiding citizens to take up arms against you.

“But nothing—truly nothing—has prepared me to address those elected members of our government who continue to deny the events of that day, and in doing so, betray their oath of office.”

“I told them to just leave the Capitol,” he said.

Dunn recalled someone shouted back: “This is our house. President Trump invited us here. We’re here to stop the steal. Joe Biden is not the president. Nobody voted for Joe Biden.”

Dunn said that prompted him to do something he wouldn’t normally have done.

“I’m a law enforcement officer, and I do my best to keep politics out of my job. But in this circumstance, I responded, ‘Well, I voted for Joe Biden. Does my vote not count? Am I nobody?’” Dunn recalled asking.  “That prompted a torrent of racial epithets.”

He said “one woman in a pink MAGA shirt yelled” the “N-word,” and then others followed suit, shouting the “F-word” and the “N-word.”

No audio or video evidence of the exchange Dunn described has surfaced to back up his claim.

Dunn said that was the first time anyone ever called him the “N-word” while he was in a Capitol Police uniform and that he heard similar stories from other black officers defending the Capitol that day.

Rioters attacked D.C. Metropolitan Police officer Daniel Hodges, who is white. He told the panel the “overwhelmingly white” rioters were making “xenophobic” remarks to nonwhite officers, but that they tried to recruit him.

“Some of them would try to recruit me,” Hodges told the panel. “One of them came up to me and said, ‘Are you my brother?’”

He said he was perplexed that some who stormed the Capitol purported to support police.

“To my perpetual confusion, I saw the ‘thin blue line’ flag, a symbol of support for law enforcement, more than once being carried by the terrorists as they ignored our commands and continued to assault us,” Hodges said.