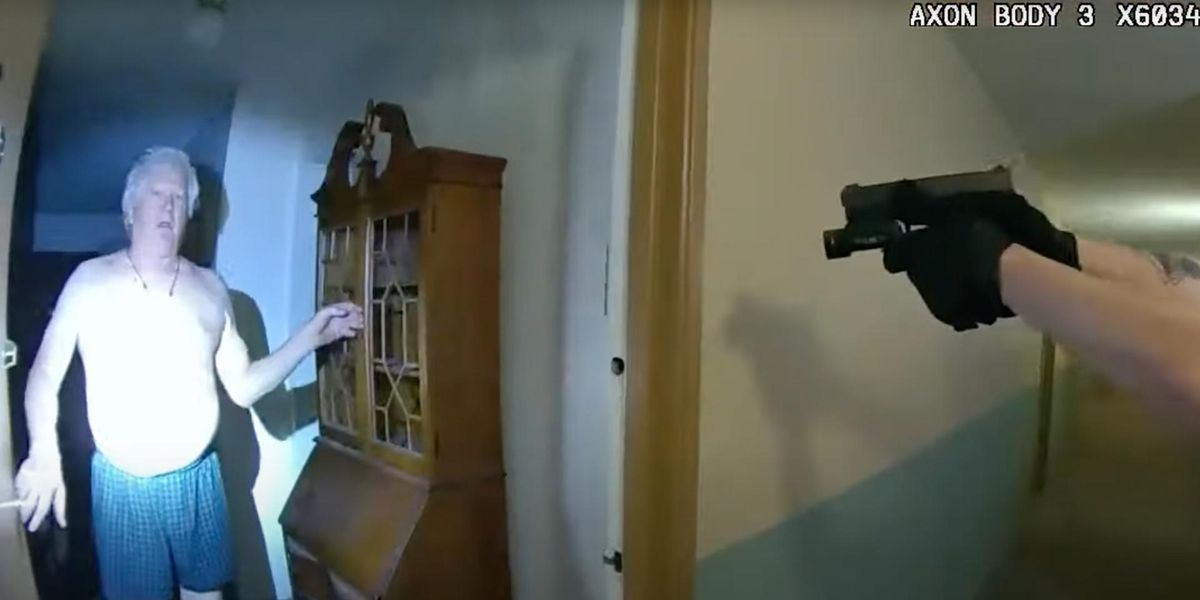 Michael Clark, a 75-year-old resident of Idaho Springs, Colorado, has filed a federal civil rights lawsuit against after a police officer used a Taser gun against him without warning during a May incident, he said.

Officials released the body camera footage of the incident this week.

The May incident unfolded when two officers identified as Hanning and Summers showed up at Clark’s home after reports that he punched a female neighbor in the face.

According to KMGH-TV, the incident began with a 911 call during the evening hours of May 30.

“Clark’s neighbors, Timothy Braden and Brittany Odom, had just moved in,” the station reported. “That day, they were drinking, smoking marijuana and sorting through moving boxes, according to the lawsuit. By 10 p.m., Odom was drunk, stumbling and yelling in the apartment. Braden decided to take his dog for a walk and left.”

At that point, Odom reportedly banged into the wall her apartment shared with Clark, prompting the elderly man to bang on the wall and loudly demand she keep the noise down.

When Braden returned home, Odom said that Clark punched her in the face and the two phoned authorities to report an assault.

The suit stated that Odom told dispatchers that Clark “punched her in the mouth and face, that there was blood everywhere, and that all she had done to deserve this was politely knock on his door to inquire as to his specific concerns regarding her noise.”

When police arrived at Odom and Braden’s home, Odom did not exhibit any signs or markings consistent with the allegations that she’d been attacked, the lawsuit stated.

Police then walked down the hallway to question Clark over Odom’s allegations.

Authorities initially said that Clark, who was wearing only underwear at the time, opened the door with a machete in his hand, fearing that one or more of his noisy neighbors were coming over for a physical confrontation. His attorney, Sarah Schielke, said that the “machete,” however, was actually a decorative sawfish bill — a souvenir from Hawaii.

Newly released body camera footage showed the officers approaching Clark’s door and knocking. They did not announce themselves as officers of the law before Clark opened the door.

Clark, as shown in the video, opened the door and asked, “What do you want?”

Hanning immediately began walking toward Clark, and described by court documents, reportedly forced the elderly man into the wall.

He and Summers — who was pointing her gun at him by that point — then demanded Clark drop the object in his hand.

Clark complied and placed the object on a shelf in his apartment.

The officers then demanded that Clark move out into the hallway and get on the ground, but he refused and began complaining about the noise made by his neighbors.

At that moment, Hanning deployed the Taser, forcing Clark to fall backward to the floor, where he was immediately knocked unconscious and began bleeding from the head.

Hanning and Summers at that point dragged an unconscious Clark out of his home and into the hallway, where Hanning reportedly turned Clark on his stomach and kneeled on his neck, the lawsuit states.

At that point, the suit states, Hanning took the sword from the shelf inside Clark’s apartment and dropped it in the hallway outside of his unit.

According to reports, it was not until after Clark regained consciousness — and was handcuffed on the ground — that Hanning told him that the female neighbor accused him of punching her.

Clark, according to various reports, denied any such behavior, saying, “Huh? I was just in bed. I attacked nobody. I was just laying in bed. I did nothing.”

Hanning then began arrest proceedings and read the elderly man his rights as paramedics arrived on the scene and rushed him to the hospital for treatment.

An affidavit states that during the arrest, Hanning “tased, kicked, tackled, punched, and choked” the elderly man.

Doctors eventually admitted Clark to a nursing care facility due to myriad health issues — all of which are reported to have stemmed from the May incident — including a stroke, burst appendix, and hearing complications. The lawsuit also stated that the kneeling caused an injury to Clark’s carotid artery, which later reportedly required surgery.

Following the incident, Hanning was charged with assault of an at-risk adult and later fired.

Summers was not charged in the incident.

Clark’s suit states that Odom — who faces no charges at the time of this reporting — was previously convicted on charges of first-degree fraud for giving Florida police a false identity in 2016, charges of felony domestic violence in 2011, and again in 2012.

The suit, according to the station, also reports that a victim’s advocate visited Odom at her apartment on the evening of the incident, where she reportedly provided “many new details” about the alleged attack that appeared to be in contrast with what she initially reported, including stating that Clark pulled a gun on her and that Braden was the one who’d knocked on doors and held her back from fighting with Clark.

During the conversation, Odom also reportedly threatened to kill Clark on a number of occasions.

The next day, Hanning arrived to take further statements from Odom, who was reportedly “utterly intoxicated” at the time and provided new iterations of the incident once more.

What is being said about this?

In a statement on the suit, Schielke said that Clark spent the day before the incident placing American flags on the graves of fallen soldiers to honor Memorial Day.

“He would end the day tased, tackled, kicked, and choked by Idaho Springs Police officers while he was unarmed and unclothed, inside his own apartment,” she said.

“These officers committed assault, burglary, and kidnapping on Mr. Clark. It’s all on video. And yet only Hanning is charged with one low-level felony. Brittany Odom is charged with no crimes. Beyond the reckless indifference to Mr. Clark’s rights detailed in this lawsuit, I want to highlight something additionally horrific that went on here. Ms. Odom is seen on these body cam videos making multiple threats on Mr. Clark’s life to police, and neither Chief Buseck or elected district attorney Heidi McCollum, who have had the videos for the past 10 weeks, ever attempted to warn Mr. Clark that his life was in danger. They did not inform him of the threats. They did not obtain a protection order on his behalf. They did not even alert the apartment’s property manager.”

“Instead,” Schielke continued, “they kept the videos from Mr. Clark and his family. They took no steps to protect him from Ms. Odom, who, in addition to the repeated declarations we see her make on video stating she would kill Mr. Clark, also has a violent criminal history that includes an aggravated assault charge for stabbing a man in the neck. How could so many individuals at so many levels of government fail so repeatedly and deliberately to execute their duties to keep this innocent, elderly man safe? It is a culture of recklessness, indifference, and self-protectionism. And sadly, as the events of this case illustrate — it goes all the way to the top. With this lawsuit and everything else he has left, Mr. Clark intends to put an end to it.”

According to the Associated Press, Clark’s family pushed for the release of the footage because Schielke said that “police had released misleading information about what happened, suggesting that Clark was at fault” for the incident and subsequent treatment.

“People like this should not be police,” Clark said about his encounter. “What they took from me that day, I can’t put into words. I’m going to do whatever it takes with what little time I have left to stop this from happening to anyone else ever again.”

The suit, according to the station, states that Hanning and Summers both have histories of excessive force incidents, reckless uses of force, and more.

Clark, according to the station, is seeking declaratory and injunctive relief and compensatory and consequential damages, plus a formal written apology from each defendant, policy changes at the department, and mandatory training to prevent similar future incidents from happening.

The Associated Press reports that a lawyer for Hanning did not immediately return a telephone call or an email seeking comment on the suit.

Summers and Sonnenberg have remained employed by the department, according to reports, and along with the department, have not issued public statements on the pending litigation.