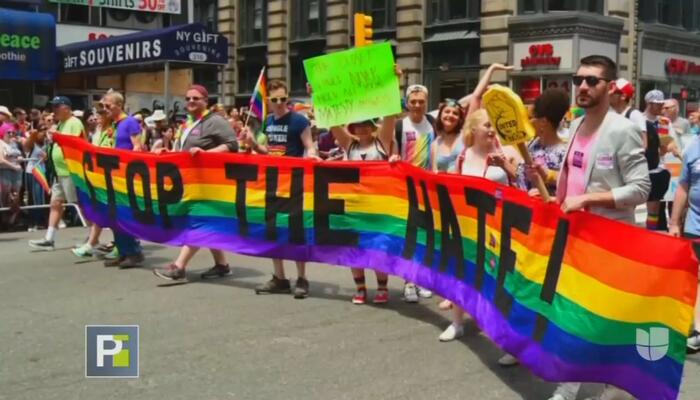 When it comes to advocacy for the LGBTQ agenda as “Pride Month” winds down, Univision´s relentless push came to shove- right down the throats of viewers of Primer Impacto, the network’s afternoon tabloid-format news program.

The latest salvo came sugar-coated with “spirituality” and was served on the same day that the anchors at Despierta América pushed for including non-binary words in the Spanish language, so as to show “them” (the LGBTQ community), respect. Now, they state, a person’s dignity depends on whether they “affirm their identity”.

MICHELLE GALVÁN: As we know, June is the month in which we celebrate inclusion and diversity because all human beings deserve respect, regardless of gender, sexual orientation or religious beliefs. And that is precisely what Carlos Anaya is going to talk to us about today in Vitamin for the Soul. Go ahead, Carlos.

CARLOS ANAYA: Thank you. I´m Carlos Anaya, from Café Espiritual  (Spiritual Coffee) and Vitamin for the Soul. Today I’m carry this rainbow in support of one of the hardest-hit communities in history- gay, lesbian, bisexual, trans and many expressions of gender identity, who fight for equality. And it’s time to cancel and change paradigms and learn to be more tolerant because every human being, regardless of sexual orientation, longs to love and to be loved. The natural beauty of the rainbow lies in its different colors- with deep symbolic power. It’s all about different strokes for different folks, of a thousand colors. So let’s be unique. Like the fingerprint that characterizes you and sets you apart from other people. So it’s time to say goodbye and say a true goodbye to ignorance that only causes discord and separation. Remember that when you affirm your identity, you reaffirm your dignity. Back with you.

The peace-and-love-for-all report opened to a numinous intro fit for a palm-reader promo, and featured Univision contributor Carlos Anaya. Anaya, who describes himself as a “provider of wellness and spirituality”, followed hostess Michelle Galvan´s lead about how “all human beings deserve respect, regardless of gender, sexual orientation or religious beliefs”.

Ironically, and despite his rainbow garb, Anaya ended up endorsing exclusion in a message about inclusion: From the Utopian “we are all the same”, Ayala ambled on to “you are as different from other people as your fingerprint”.

Now that June comes to an end, and with it “Pride Month”, we look forward to Univision going back to serving its audiences the usual fake news and disinformation about the issues that affect them, as opposed to LGBTQ propaganda.

Neutrogena is one of the advertisers that enable the liberal agenda as news at the nation’s Spanish-speaking press. Help the MRC fight back bias in the media here.

Does Joe Biden Feel Lucky?
Officer Who Stopped Gabby Petito Devastated By Her Death
Hypocritical CNN Pushes Anti-Democracy Rant
Is Ray Epps The Key?
‘Kiss My A**’: Dan Bongino unleashes on YouTube over the Big Tech giant’s temporary suspension of his channel