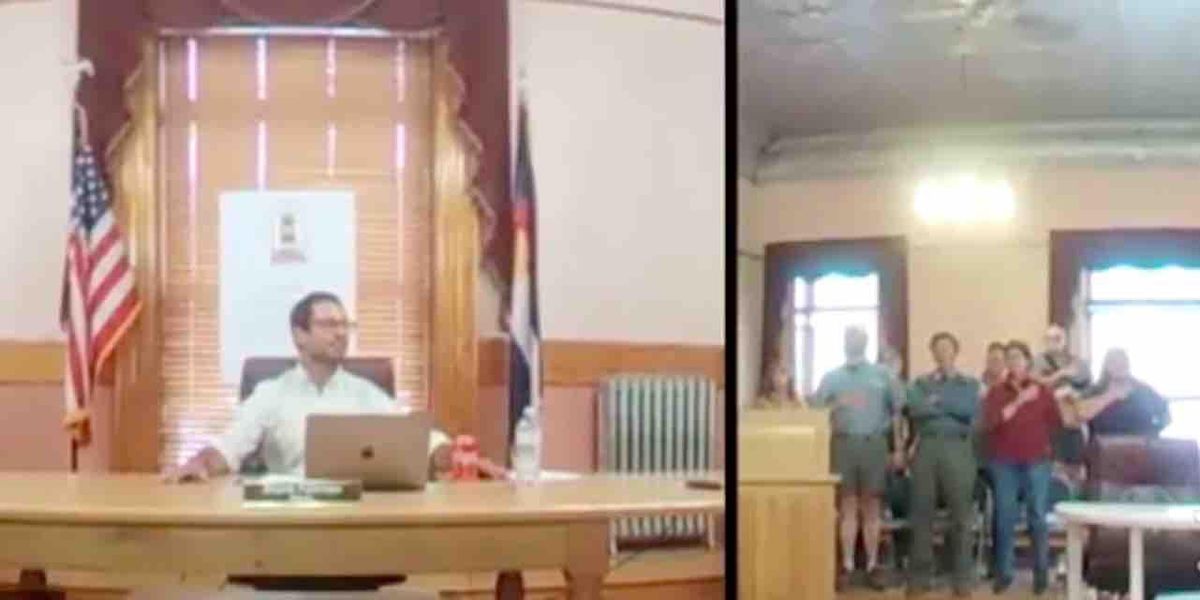 The mayor of Silverton, Colorado — on Flag Day, no less — declared that the Pledge of Allegiance no longer will be recited at town trustee meetings, KDVR-TV reported.

But his honor’s wishes were met with a dose good ol’ fashioned American, “Oh, yeah?”

“Due to direct and indirect threats, inappropriate comments in and out of public meetings, and general divisiveness and issues created in our community, we will not be reciting the Pledge of Allegiance during Town of Silverton trustee meetings,” Mayor Shane Fuhrman announced at the June 14 meeting, the station said.

The mayor didn’t go into detail about the alleged threats and other factors, KCNC-TV reported.

But right after Fuhrman’s statement, Trustee Molly Barela pushed back.

“We already discussed this as a board; any other unilateral decisions we need to know about?” Barela asked the mayor.

Fuhrman replied by saying “If you’d like to find somewhere in the code, something that doesn’t permit me to do this, then I welcome that discussion at our next meetings,” KDVR reported.

Barela shot back that the decision was made without the board’s opinion, the station added.

“It’s been done for a long time. We all took an oath, and we as a board we decided it would be done,” she said.

In your face, Mr. Mayor

Then during the public comment time, a woman began to speak — and launched right into the pledge. Within seconds numerous other members of the public — and what appeared to be at least one trustee — stood with her and recited it:

Fuhrman tried to interrupt, but the people just raised their voices.

KDVR reported that the mayor threatened those reciting the pledge that they’d be asked to leave if it happens again.

Not the first time

It wasn’t the first time members of the public complained about trustees not standing for the pledge, KDVR said. The station noted that in 2018, after a trustee didn’t stand for the pledge, a member of the public commented that “it infuriates the hell out of me that you don’t have the courage or the consideration to stand when we do the Pledge of Allegiance.”

The man added to the trustee in question that “somebody’s gonna kick your butt up and down Greene Street.” The trustee replied that the man made a “threat to my personal well being … he is done.”

The man’s response as he walked away? “Oh, you’re full of crap.”

KDVR said Barela issued the following statement on the matter:

“Back in April 2020 when the newest board members were seated the mayor brought it up that he didn’t want to do the Pledge of Allegiance anymore because it’s not really a thing, it was a 4/3 vote that we continue to do it. By going back to in-person meetings it changes the dynamic compared to what was happening on Zoom. While on Zoom the three individuals who chose not to say the Pledge of Allegiance would just turn off their cameras; now that we’ve gone back to in-person meetings, members of the general population, especially those who are veterans, have been questioning why would you run for office and take an oath to uphold the laws of the United States of America, the state of Colorado, and the town of Silverton if you won’t stand for the Pledge. Members of the public have told them that they should be ashamed of themselves. I personally didn’t like his unilateral decision when we as a collective group had already decided over a year ago to continue to do the Pledge. I don’t know if it was premeditated to have it done on Flag Day, which we all know … was declared June 14, 1777, by the second continental Congress; now mayor Shane Fuhrman has made this First Amendment right issue. To tell members of the public they are not allowed to say the Pledge of Allegiance during public comment and threaten to have them removed, that it was a one strike … you’re out policy, violates every single one of their First Amendment rights.”

KDVR said it reached out to Fuhrman through several channels for more details on what led to his decision to nix the pledge but didn’t hear back.