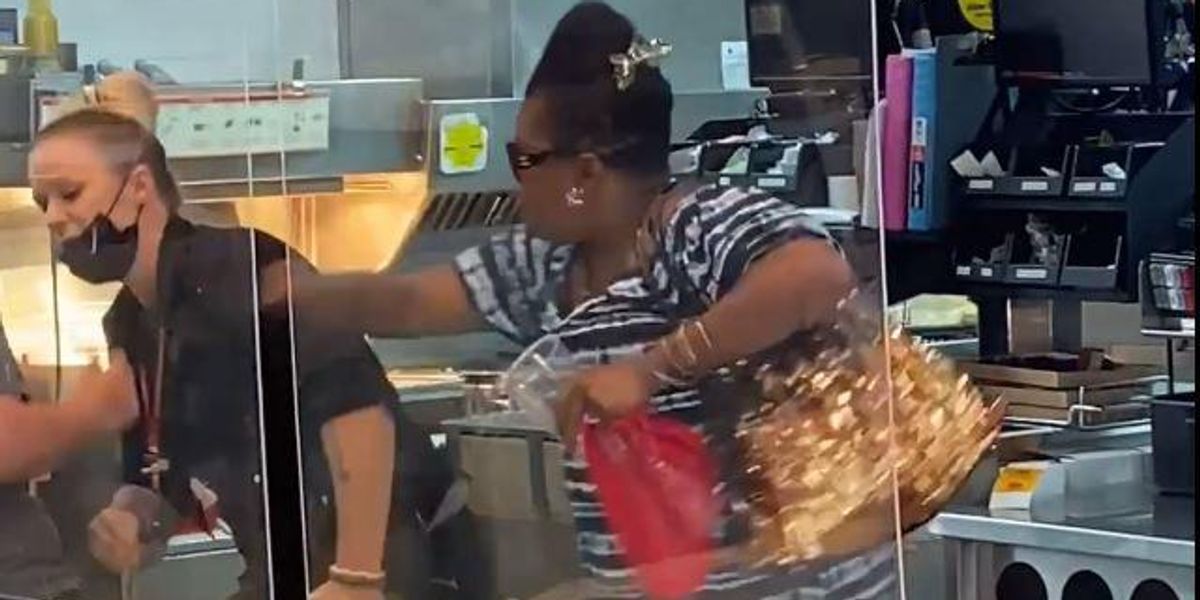 An Ohio woman went berserk on a pair of McDonald’s employees earlier this week in an incident that was caught on video.

Police say the alleged perpetrator, 44-year-old Cherysse Cleveland, was apparently angry because the workers denied her request to mix slushie flavors together. She is seen physically attacking the employees multiple times in a clip taken by a witness.

Facebook user Brian Allen posted the video to the platform on Monday, writing in a message, “Craziness is out in full force, just saw this at Ravenna McDonald’s.”

Allen’s video shows Cleveland behind the counter at the McDonald’s, pushing two female employees as one calls for bystanders to call the cops and another asks her, “Are you crazy?”

Cleveland then punches one of the employees while the second worker tells the suspect, “Do not touch my boss!”

Cleveland continues to argue and yell at the two other women, who repeatedly ask her to leave before one of the employees tells her, “Honey, I don’t know what’s wrong with you.”

That comment appeared to calm Cleveland for a brief moment. She replied with emotion, “Sorry, I’ve been up all day. I’m sorry.”

But Cleveland was quickly triggered again, and ripped the apparent supervisor’s mask off before running to the front of the counter to grab ice and returning behind the registers to attack one of the workers once again. That worker gets Cleveland on the ground and punches her several times. Police then arrive and place Cleveland in handcuffs.

Cleveland was arrested and charged with two counts of misdemeanor assault. The Daily Mail reported that when she appeared in court the next day, Cleveland was ordered not to return to the McDonald’s where the incident occurred and not to have any contact with her alleged victims. Her bond was set at $1,000.

WOIO-TV interviewed Mr. Allen, the witness who took the video, to gain his account of what occurred before he began recording.

“I heard her ask for a slushie with all three flavors mixed into one,” Allen told the outlet. “Whereupon the manager informed her that they could not do that, and she became increasingly irritated and combative and decided that she would go behind the counter and fix her own drink.”

As things began to escalate, Allen pulled out his phone to document the encounter. “I was concerned that she may start hurting somebody,” he said. “So, I started recording in case law enforcement needed the tape for any kind of evidence of the assault.”