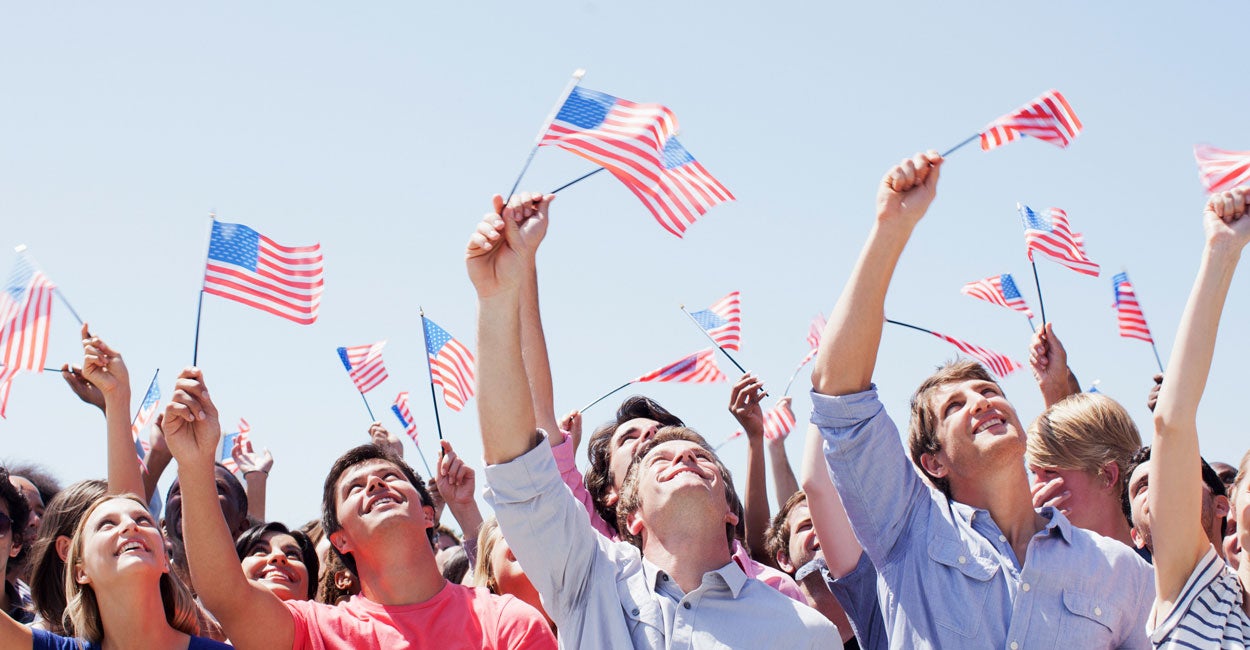 Americans are woke. They woke-up and realized President Joe Biden is no moderate. He is spearheading the most radical policies in modern history, policies that would transform this nation into an unrecognizable country—far less safe, more impoverished, and more unfree.

Nevertheless, the vital issues of the day pull us together. Conservatives share a common vision for maximizing human freedom and opportunity. They are primed to unite and fight. What’s more, many Americans who do not identify as conservatives share these goals. Any national leader who champions this unifying vision will win the support of a vast swath of centrist America, and will energize conservatives in the process.

Here are 12 issues that conservatives have answers for. Together, they make up a platform that a majority of Americans can rally around.

1. Protect Our Vote. Biden slandered voter integrity laws by labeling them “Jim Crow.” Practically his first act of governance was to propose that the federal government take over the conduct of national elections.

America deserves better. Close elections are nothing new in America, and as the Supreme Court recognized, fraud has altered the outcome in numerous past elections. Every fraudulent vote cast invalidates the vote of an eligible voter. This imperils democracy.

Americans deserve an electoral process they can trust. Reforms intended to ensure election integrity do not disenfranchise voters and, in fact, protect the right to vote and confidence in the fairness and integrity of elections. We know without question that the many vulnerabilities in our current system make election fraud relatively easy to commit and difficult to detect after the fact.

It is important to take reasonable, common-sense steps to make it hard to cheat, while making it easy for legitimate voters to vote.

2. Secure Our Border. Biden is an “open borders” president—period. It is not possible to have a nation without secure borders and a lawful and orderly immigration system. Americans are dismayed by the current chaotic conditions created by the rapid implementation of policies that actually encourage illegal immigration rather than preventing it.

Our country is famously “a nation of immigrants.” Americans want new citizens to become part of an American community. They also want safe neighborhoods, to stop the opioid epidemic, and not bankrupt communities with the costs of illegal immigration, all policies under assault by unsecured borders.

Americans want strong borders, immigration laws to be enforced like any other law, and to prioritize Americans interests above those of illegal aliens.

3. No More Debt. Biden’s budget and economic policies promise sluggish economic growth and the threat of more inflation. The federal budget is growing far faster than American paychecks with the debt has hit astronomical levels. In the last year alone, every household’s share of the national debt increased by more than $36,000 to nearly a quarter of a million dollars. This madness must stop.

Overspending impedes economic growth. When government grows too big, and taxes and spends too much, it infringes on liberty and makes it more difficult for families and communities to live the American dream. Rather than wasteful spending, the better plan is to get the economy open and get people back to work.

4. Stand Up to China. Biden is weak on China. That’s a problem. No free nation wants to be a suburb of Beijing.

Ultimately, the China challenge is about what kind of world we want to live in. We cherish human rights, a free economy, and freely elected governments. China doesn’t believe in any of those. In fact, they see freedom as the biggest obstacle to the world they want. If we don’t defend these equities, they will destroy them.

Holding China accountable for its misdeeds and human rights violations is always the best policy. Otherwise, Beijing will regard America as nothing more than a speed bump to its global ambitions. The most significant and important way to punish the regime for its many misdeeds is to stand up for our own vital interests—pushing back will inflict real damage, humiliation, and punishment on the Chinese Communist Party. That will get their attention.

As an example, to let China go unpunished for its intentional and negligent actions in releasing a pandemic on the world ought to be unthinkable.

We all know Americans are better off when they can keep more of their own money. Following the historic 2017 tax cuts, Americans experienced increased take-home pay, more job opportunities and faster wage growth.

Unfortunately, these cuts were not permanent. Taxes will automatically increase on almost all Americans in just a few short years. Biden’s tax increases would just make it worse.

6. Stop the Woke. Nothing could be more jarring than Biden endorsing critical race theory, an inherently racist doctrine destructive to our families and communities. And that’s not all.

A tidal wave of identity politics has swept America toward resegregation, to politicized curricula that rewrite our history and to laws that dictate biological males must be allowed to play on women’s sports teams. This tide threatens to entrench division and enforce a new political orthodoxy rather than build unity within our communities. This is harmful to all Americans.

Indeed, our everyday experiences show what really makes us stronger. As Americans have confronted the unprecedented coronavirus pandemic, we have turned to the source of strength that has sustained us through other challenges: our families and communities. These “little platoons” in our communities form the foundation for our self-governance and an antidote to an over-reliance on government intervention. They represent the kind of America that Americans want.

We should be focusing on building families and communities, not on making the nation wards of the government and having Washington dictate how we live our lives.

7. Cut Red Tape. In Biden’s America every facet of American life will be controlled by government’s massive compendium of do’s and don’ts.

While a burden for all, overregulation harms low-income families and fixed-income seniors the most. And already, the present administration has displayed an appetite for more, seeking new regulatory controls over energy, transportation, and labor sectors.

Using the president’s regulatory power to kill the Keystone XL is just one example. With one pen stroke, Biden destroyed jobs, undermined America’s energy independence, made a decision that is bad for the environment and pushed fuel prices higher.

Unless stopped, the nation’s regulatory burden will crush the freedoms of everyday Americans. Many of the nation’s foundational regulatory statutes were enacted a half-century ago. Thousands of obsolete and redundant rules should be repealed.

Regulations that are necessary should be authorized by law not presidential fiat. They should be efficacious. Policymakers should be accountable for how they impact us.

8. Sleep Safe at Night. Biden could not be more indifferent to America’s security nor more aggressive in using security policy instead to advance progressive pet projects. His first budget shows defense ranks dead last in the president’s priorities.

America is not the world’s policeman nor its babysitter. But, America is a nation with global interests. We must have the capacity to protect them. That’s what “peace through strength” is all about, a strong military and a government wise enough to avoid reckless military adventures.

America can well afford to defend itself. The costs of not providing for the common defense would be far greater. To preserve the peace rather than promote war, America must ensure its military forces are of sufficient size, capability and readiness to persuade any potential adversary that taking on the United States in an unthinkable idea.

9. Stop Big Tech. Biden sees big tech as a tool to control Americans, not businesses to provide goods and services.

“Big Tech” is not inherently bad because it’s big. Americans are justifiably proud that our nation remains a competitive, technological superpower, enabling every American to benefit that technology can provide in a free society. Citizens and consumers want and deserve an internet that is an engine of economic growth, one that is safe from malicious criminal activity and serves to enable the free exchange of ideas.

Americans expect their constitutional rights of privacy and free speech to be respected. They also want American technology companies to continue to lead in delivering technological innovation and economic growth.

Many Americans, however, are concerned they no longer have control over the information they receive—not when Big Tech platforms use algorithms to screen, prioritize, label, and remove content that is political or policy-related. Americans also want policies and companies that give them reason to trust that tech platforms will stop trying to dictate or limit discourse based on users’ political views and instead allow for substantive, healthy debate.

Nearly 90% of American students attend public schools—and 70% of them were assigned to them. The number of families who can opt out of the neighborhood assignment system is miniscule. The extent to which most American families can select their schools is largely determined by their ability to afford to live within a certain neighborhood.

Many families face the harsh reality that they have no alternative but to send their children to a failing school. The lack of options forces them to compromise on the quality and safety of their children’s education, with a lifetime of opportunity costs. An education system that denies students access to schools that would better serve them and give them the opportunities they deserve is unjust.

Education excellence requires rethinking how public education is structured. School choice options allow students to attend schools that can meet their learning needs, allowing them to develop better both academically and as citizens. Dollars should fund students, rather than systems, following students to schools and learning options that are the right fit for them.

11. Empower Patients, Not Government. Decades of ever-increasing government mandates and bureaucratization have led to rising costs and fewer choices in health care. Biden wants more government health care, no matter how bad and costly it is.

The solution is not to outlaw every American’s existing plan and force us all into the same government run plan against our will. Government should not get between Americans and their doctors. Instead, every American should be empowered to get the personalized care they need from the doctors they trust.

Americans must be free to control our own health care decisions and dollars, and innovators must be free to deliver care and coverage that meet the diverse needs of individuals and their families, without federal mandates that undermine the doctor-patient relationship.

12. Make Our Streets Safe. Biden is using the public safety issue as a tool to hound his political opponents. He has done nothing to stem the persistent organized political violence by Black Lives Matter and Antifa that have been ravaging our inner cities.

Rioting and looting have become regular responses to police incidents or, in the case of Portland, for no apparent reason at all. Calls to defund the police remain all too common. Violent crime in many of America’s most “liberal” cities is skyrocketing. That cannot become the “new normal.”

Law and order benefit all parts of society. It is time to stand up to the leftist mob, return to supporting law enforcement, publicly condemn all violence, and demand prosecutors punish violent actors no matter who the perpetrator happens to be.

We Deserve Unity. Biden is constantly telling us we are divided —and that he will unite us. The reality is his policies divide us. What unites us are the foundational principles of liberty, justice and equality – and policies rooted in that heritage that would make America a “more perfect union.”

It is already clear that this is what every day Americans want. It’s time for our leaders to commit to this, too.