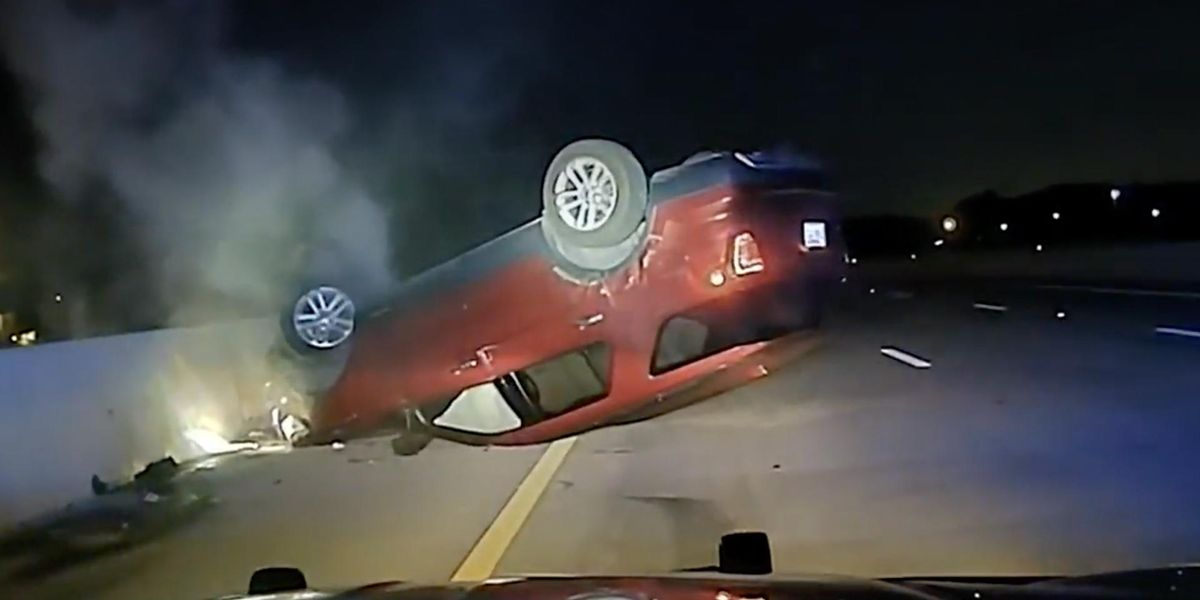 An Arkansas woman is suing state police in hopes of departmental policy changes after an officer used a PIT maneuver to stop her vehicle in 2020. The move caused the vehicle the then-pregnant woman was driving to flip.

In a Thursday report from KLRT-TV, the woman, Nicole Harper, recalled the harrowing 2020 incident in which she said an officer of the law negligently executed a PIT maneuver during a traffic stop, forcing her car to overturn on the interstate.

She said that she was driving home on I-67 when Arkansas State Police Senior Cpl. Rodney Dunn clocked her speeding.

Harper said that she had every intention of pulling over at the officer’s demand, but was looking for a safe place to do so, as there was a very narrow shoulder on that portion of the interstate.

“Dash camera video from Dunn’s patrol car showed Harper pulled into the right lane, slowed down, and turned on hazards,” the station reported. “Less than two minutes after turning on his blue lights, Dunn performed a PIT maneuver (precision immobilization technique), which caused Harper’s car to crash into the concrete median and flip.”

Harper said that she was fearful that she would lose the baby as a result of the terrifying crash.

The officer’s body mic captured the conversation that took place after the crash.

“Why didn’t you stop?” Dunn asked Harper, who responded, “Because I didn’t feel it was safe.”

Dunn fired back, “Well, this is where you ended up.”

Harper responded, “I thought it would be safe to wait until the exit.”

No, Dunn said, “you pull over when law enforcement stops you.”

According to the report, the PIT maneuver took place less than a mile from the next exit, and where the interstate shoulder widens to a safer distance from the road.

Harper was taken to the emergency room on the evening of the crash, where a doctor told Harper — who was two months pregnant at the time — that a fetal heartbeat could not be detected at the time of the visit and that the baby might not have survived the crash, according to an NBC News report.

The next morning, however, Harper visited her OB-GYN, who did pick up the child’s heartbeat.

Harper’s daughter was born in February.

She filed the May lawsuit in Pulaski County Circuit Court.

Harper filed the suit in May against the Arkansas State Police and said that the tactic was “negligent and excessive use of force.”

The suit, according to the station, says that the officer’s dash cam video captures all the evidence the suit needs to corroborate Harper’s claim.

“I feel like I had heard that’s what you do, you slow down, you put your flashers on, and you drive to a safe place,” Harper said, which is precisely what the dash cam footage shows she did.

Indeed, the station reported, that’s precisely what the state police’s driver license study guide states a motorist ought to do when being pulled over.

Under “What to do when you are stopped,” the number one rule is to use “emergency flashers to indicate to the officer that you are seeking a safe place to stop.”

Harper’s lawyer, Andrew Norwood, said that Harper was the victim of “deadly force.”

“There was a less dangerous and more safe avenue that could have been taken before flipping her vehicle and making it bounce off a concrete barrier going 60 miles an hour,” Norwood added.

Harper added, “What if I had kids in the car? He wouldn’t have known. Did that matter? What was going through his head? What made him think this was OK?”

In a lengthy statement from the Arkansas State Troopers, Col. Bill Bryant said:

Over the past five years, Arkansas State Troopers have documented a 52 percent increase in incidents of drivers making a conscious choice to ignore traffic stops initiated by the troopers. Instead of stopping, the drivers try to flee. In more populated areas of the state, the incidents of fleeing from troopers have risen by more than 80 percent. The fleeing drivers pull away at a high rate of speed, wildly driving, dangerously passing other vehicles, showing no regard for the safety of other motorists, creating an imminent threat to the public.

There’s a fundamental state law none of us should ever forget. All drivers are required under Arkansas law to safely pull-off the roadway and stop when a police officer activates the patrol vehicle emergency lights and siren. The language of the law is crystal clear. Upon the immediate approach of an authorized emergency vehicle displaying the signal to stop, the driver must pull-over and stop. *(see Arkansas statutes ACA §27-51-901 & §27-49-107)

Should a driver make the decision to ignore the law and flee from police, state troopers are trained to consider their options. Based on the totality of circumstances a state trooper could deploy spike strips to deflate the tires of the vehicle being pursued, execute a boxing technique to contain the pursuit slowing the driver to a stop, execute a PIT maneuver or terminate the pursuit.

Most Arkansas State Police pursuits end without a PIT maneuver being utilized.

PIT has proven to be an effective tool to stop drivers who are placing others in harm’s way. It has saved lives among those who choose to obey the law against those who choose to run from police.
In every case a state trooper has used a PIT maneuver, the fleeing driver could have chosen to end the pursuit by doing what all law-abiding citizens do every day when a police officer turns-on the blue lights – they pull over and stop.

WAYNE ROOT: Seven Dead Doctors in 14 Days Don’t Lie. The Covid Vaccine is a Killer.
Homebuilders say U.S. is in a ‘housing recession’ as sentiment turns negative
Liz Warren says ‘everyone’ told her they would have voted for her in the presidential primary if she had a penis
Man Chugs Cloudy Drink In Court, Dies After Judge Reads Guilty Verdict For Child Rape
IRS and Allies Downplay 87,000-Person Hiring Binge