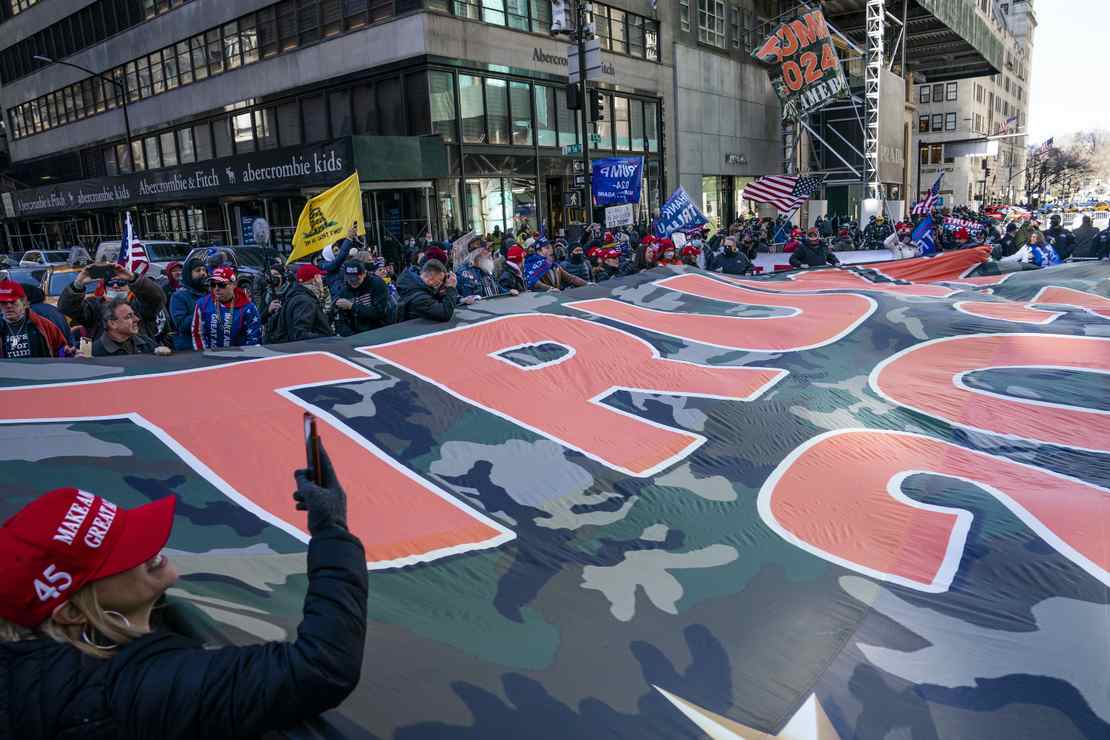 Not all heroes bear yuge flags, but one does. The Deplorable Award goes to Dion Cini, who unfurled a large flag that said, “Trump Won Save America” at Yankee Stadium on May 27, earning cheers and jeers from the crowd. Even better, he wore a body-cam and caught it all on video.

Most media outlets are reporting that Cini got booed for his stunt but the body-cam and still photos show mixed responses from Yankee fans. Stadium security quickly showed up, including a foul-mouthed man who took the Trump flags too seriously. In the video, Cini can be heard saying he is a retired police officer. Cini’s accomplice was briefly put in cuffs but neither was arrested and their flag was returned.

This isn’t Cini’s first time unfurling a Trump flag. In this video we see him get a nasty reaction at Citi Field.

One jabroni Mets fan even assaulted Cini from behind. The cops wrestled the dope to the ground and took him away in cuffs. In the video, Cini can be heard saying this is his seventh unfurling, and he has to catch a morning flight to do it again in Florida.

Newsmax’s Greg Kelly interviewed Cini after he was assaulted while skating with a Trump 2024 flag at Wollman Rink in New York City, which, ironically, was built by Donald Trump.

The website linked in the video sells huge Trump flags. I’m not sure yet if Cini owns the company but it’s a safe wager since his Twitter page describes him as a “Guerilla Marketeer, Founder of OperationFlagDrop and ‘Professional Provacatuer.’”

Cini’s flag got a great reception at Fenway Park but the head of security, Colm Lydon, pilfered it and it doesn’t look as though he is giving it back, judging by Cini’s tweet to the flag-snagger:

Colm Lydon, ex-cop and head of security who stole my flag. @DeputyLydon do the right thing and return my flag. I will spend all my time, money & resources to get it back. #SaveYourselfhttps://t.co/85duCAXR1C

Cini tweeted earlier on Tuesday that he is pressing charges against Lydon:

In 5 years, this is the first time I had the flag stolen. And what they don’t know, but my attorney knows, is that if you do not attach the flag, it’s no different than stealing +250 cash from my pocket. Am pressing charges for grand larceny today. Wrong bull!!!

In 5 years, this is the first time I had the flag stolen. And what they don’t know, but my attorney knows, is that if you do not attach the flag, it’s no different than stealing +250 cash from my pocket. Am pressing charges for grand larceny today. Wrong bull!!! pic.twitter.com/77kvBNknAz

Cini’s stunts are catching on. Kamala Harris landed in Guatemala to a large sign reminding her that “Trump Won.”

Judging by Mr. Cini’s Twitter account, it is safe to assume he has no fear of physical reprisals from the Left and he doesn’t appear to be slowing down. My MAGA hat is off to you, sir!

Flight Times May Soon Be Cut in Half—Thanks to Capitalism
Biden and Johnson to agree on new ‘Atlantic Charter’ covering tech, trade and travel
VIDEO: President Macron Slapped in the Face During Tour of Southeastern France
Biden Gang Will Rely on Foreigners to Decide Which Individuals and Groups Are Granted Asylum in the US
TIME Mag Becomes Pravda – Picture of Dementia Patient Taking on Putin Is New Low in Garbage Journalism