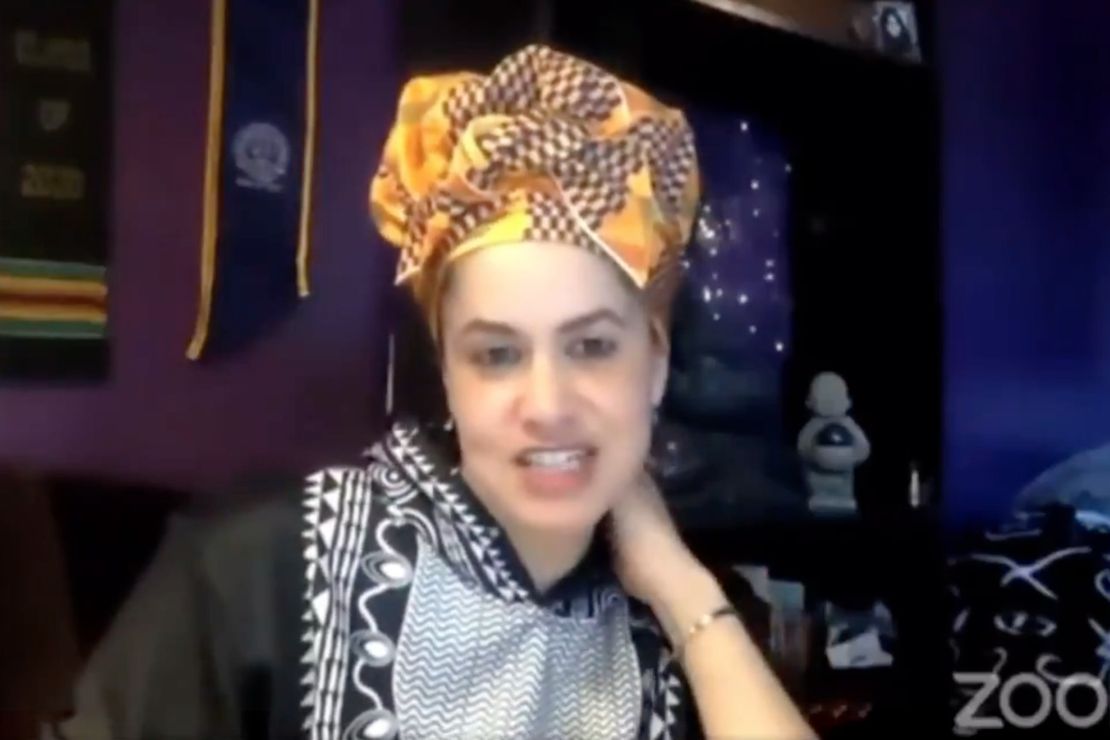 That Portland, Oregon area teacher on video explaining to fellow teachers that failure to teach critical race theory (CRT) is as much child abuse as pedophiles preying upon children is making the rounds.

I finally got a look at this eye popping video and thought, well, that’s ridiculous, obviously, but what the hell is she wearing? Is that an African headdress? And is that a … Daishiki?

The caucasian-appearing, or as my daughter instructed me to say, “white-passing” (think Meghan Markle before Harry) teacher lecturing the group of educators appeared to be, in the words of adherents in the cult of antifa, “appropriating” the garb of a culture not her own.

That the display was at the closing session of critical race theory (CRT) confab called “Equity ABAR Summit: If Not You Then Who?” for the Beaverton School District was even more delicious – not in the red licorice way, but in the ironical way of a know-it-all who suggests his fave Korean spot only to select that one kimchi that tastes like dish detergent. She’s the show boat who eats five ghost peppers thinking they were Fresnos. It’s Barack Obama saying happy “cinco de quatro.”

Now, most people don’t care about cultural appropriation. I wear yoga pants and eat dim sum. The Queen’s gin, collard greens, and Tapatio sauce are part of my fundamental food pyramid. However, people who presume to lecture me on this stuff should at least be required to follow their own rules.

The teacher, Katherine Watkins, festooned in her colorful headdress and tribal Daishiki, proclaimed her pronouns to be “she, her, we, and us,” and told the screen of teachers that most teachers are no better than pedophiles if they don’t teach critical race theory. Not subsuming children with constant explanations of differences in skin color is flat-out child abuse. Teachers failing to impart the notion that all white kids possess privilege and therefore must apologize for racism will be left behind, become obsolete, and fired eventually.

Here’s a break down of what the middle school “humanities” teacher said.

If you’re not evolving into an anti racist educator then you’re becoming obsolete in this field and profession. Our district is only getting browner and browner with our children.

Who are the racists? The Leftist Democrats who assume that black and brown children can’t master certain subject matter without being taught if they don’t immediately understand it’s because of a racist system? Or are the racists the people who simply teach the material?

Watkins, lecturing several brown and black teachers on the Zoom call, straightfacedly told teachers who might have wasted a day watching this pap that “you can’t change your melanin, but you can change your mind.”

And obviously you can’t change your melanin but you can change your mind so that you can actually function in a district that is full of BIPOC children.

Can you imagine being a 20-year-veteran teacher, eye-rolling her way through this tomfoolery thinking, “I’m teaching about gravity, what does this have to do with melanin again?” But that teacher is on her way out, according to the African hat adorned, Daishiki-wearing, white-passing lady.

Teaching the American founding and that the nation is “color blind” will lead to getting fired, according to culturally appropriating lady, who claims it’s tantamount to pedophilia.

Because you’re going to be doing damage to our children, um, trauma and so as we fire teachers who sexually abuse our children, we will be firing the teachers who do the racist things to our children and traumatize them. And even though our district might not be totally on there, OEA [Oregon Education Association – the teachers union] is working on it. NEA [National Education Association – teachers union] is working on it. And so it’s just a matter of time. So, you either evolve or dissolve.

Be that as it may, when not quoting Tupac or Usher about melanin levels or mimicking Cedric-the-Entertainer, Watkins at first was dismissed as not speaking for the Beaverton Schools. Until she was.

PJ Media’s Tyler O’Neill did a deep dive on this, discovering that the Superintendent has put teachers on notice that if they dissent from the new way of thinking about America – it was formed in 1619 explicitly for the establishment of a slave state, and that white people are by definition racist – that they’d better find a new job.

Yet in a Zoom equity committee meeting on January 28, 2021, Dan Grotting, superintendent of the school district in Beaverton, Ore., suggested that if teachers disagree with the anti-racism movement inspired by critical race theory, they should look for work elsewhere.

“I do want the message to get out there that this [anti-racism training] isn’t optional anymore,” Grotting said in the meeting, The Daily Wire reported. “We’ve waited for the willing, and if you’re not willing then maybe this isn’t the right place for you to work” (emphasis added).

As for me, it’s enough to know that the purveyors of this racist poison are so clueless that they don’t even know when they become a parody of themselves.

Same call with the Portland teachers. Pronouns were not optional. They were mandatory. pic.twitter.com/vgioWQ6HPe

Watkins works at Cedar Park Middle School in Beaverton, Oregon, which adjoins Portland. My oldest daughter used to go there before I pulled her out and plunked her into a more suitable private school years ago.

I’m thinking Cedar Park parents might be making similar plans after getting a look at this fraudulent pant load.

What a racist weirdo.