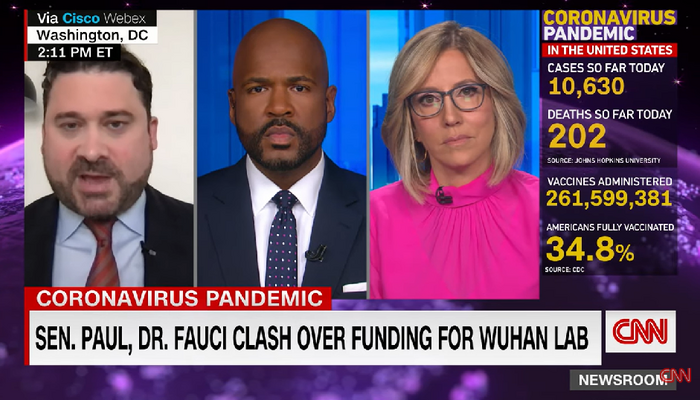 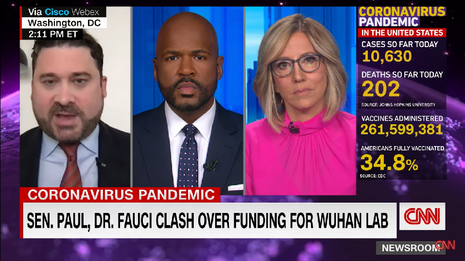 CNN political analyst Josh Rogin went completely off the CNN narrative about Dr. Anthony Fauci and spoke knowledgeably about problems with the lab in Wuhan, China.

You can see the look of surprised discomfort by the Newsroom anchors, especially Alisyn Camerota, as Rogin spoke of Wuhan lab problems which could have caused the COVID-19 outbreak and Fauci’s role in it, especially the “gain of function” which is essentially a weaponizing of a virus.

After a clip of the Tuesday confrontation between Senator Rand Paul and Fauci, Rogin began the discussion that broke the CNN taboo on the subject of a possible Wuhan lab leak.

JOSH ROGIN: There is an increasing number of lawmakers on both sides of the aisle actually who are trying to figure out if there was any basis for the theory that the pandemic that we’re all in was related to an accident was related to an accident at one of these Wuhan labs that were sending back coronaviruses. And part of that is trying to figure out what the relationships were between the Wuhan labs and the NIH and other American labs all over the country. And what gain of function research, what that means is taking viruses from the wild and doing experiments that make them more dangerous.

This possibility caused Camerota to broach this almost unheard question (at CNN) question about Fauci:

Okay that’s interesting, Josh. And of course you’re steeped in this. You have been reporting on this for a year so that sounded to us like a kind of wonky detour but is there something that Dr. Fauci or NIH is not being forthcoming about?

It might sound like a “wonky detour” to Camerota and most of her CNN colleagues but if she had been paying even a bit of attention to Rogin’s work and reporting  as well as his recently published book “Chaos Under Heaven,” it should have been no surprise to her, especially the part about Dr. Fauci or NIH not being forthcoming. Just a few weeks ago, Rogin discussed Fauci’s connection to the Wuhan lab on a Meghan Kelly podcast.

The head of the funding, the head of the entire field, really, is Anthony Fauci. He’s the godfather of gain-of-function research as we know it. That, what I said right there, is too hot for TV, because people don’t want to think about the fact that our hero of the pandemic … might also have been connected to this research, which might also have been connected to the outbreak.

Yeah, and one of those TV people for whom this topic appears to be too hot could be the very surprised Alisyn Camerota judging from her reaction to Rogin’s revelations about the supposed “hero of the pandemic.”

Exit question: Was that the last appearance of Josh Rogin on CNN?