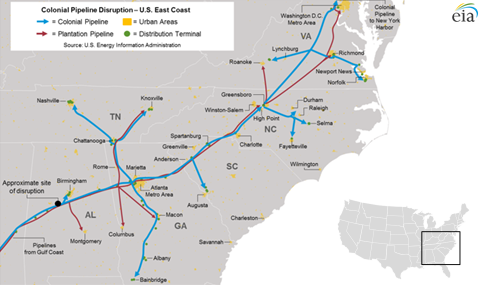 The operator of America’s largest fuel pipeline suspended all operations Friday due to a ransomware attack.

“This is what businesses now have to worry about,” U.S. Commerce Secretary Gina Raimondo said Sunday during an interview on CBS’ “Face the Nation.” “Unfortunately, these sorts of attacks are becoming more frequent. They’re here to stay.”

Colonial Pipeline delivers gasoline, diesel, aviation fuel and heating oil from refineries in Texas to consumers in the Southeast and Mid-Atlantic regions of the United States. Major consumers include Airports in Nashville, TN, Atlanta, GA, Raliegh-Durham and Charlotte, NC.

Colonial was able to restart some smaller lateral pipelines on Sunday moving fuel between some terminals and delivery points, but its four main transport lines are still shut down.

“We are in the process of restoring service to other laterals and will bring our full system back online only when we believe it is safe to do so, and in full compliance with the approval of all federal regulations,” the company said in a statement.

While the U.S. Department of Energy is leading the federal response and Homeland Security’s Cybersecurity and Infrastructure Security Agency (CISA) is working with Colonial to deal with attack.

“It’s an all hands on decks effort right now,” Raimondo said. “We’re working closely with the company, state and local officials to make sure that they get back up to normal operations as quickly as possible and there aren’t disruptions to supply.”

The federal government declared a state of emergency Sunday affecting 17 states and D.C. The declaration will remove limits on transportation of fuel by other means.

“This Declaration addresses the emergency conditions creating a need for immediate transportation of gasoline, diesel, jet fuel, and other refined petroleum products and provides necessary relief,” the Department of Transportation said.

Whether the cyberattack causes shortages and price spikes is dependent on whether the hackers penetrated pipeline operation systems. If the ransomware hackers got access to those systems, it could keep the mainlines shuttered for several more days.

There is enough refined fuel storage to hold off a short disruption, but should the pipeline remain closed longer, it could cause serious issues.

“A one-to-two-day outage is really a minor inconvenience,” said Andrew Lipow, president of Lipow Oil Associates. But by day four or five, he said, “we could see a much greater widespread impact through large areas throughout the mid-Atlantic and the southeast.”