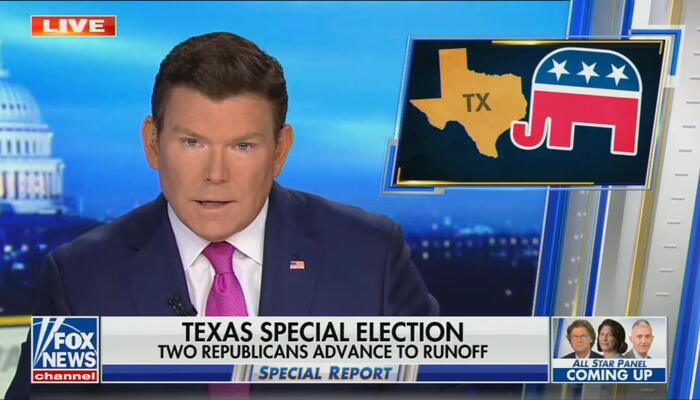 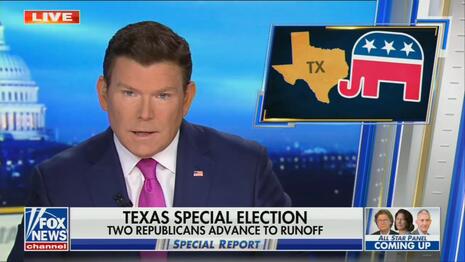 Turning Texas blue has been a saucy dream for liberals for countless cycles now, and every two years the media fantasize about the day it would. But on Saturday, Republicans slammed the door on Democratic efforts to flip the sixth district as two Republican candidates edged out them out and leading to a runoff. And in addition to locking out Democrats, voters in the district sent multiple members of the school board packing for pushing critical race theory.

None of this was reported by the major broadcast networks (ABC, CBS, and NBC) during their Sunday newscasts, with their silence spilling over into Monday as well. Instead of reporting on the Democratic defeats, they mourned for the divorce of Bill and Malinda Gates. NBC actually kicked off their Monday evening newscast with it.

Meanwhile, both ABC and NBC sported online reports about the special election teasing how it was supposedly competitive for Democrats. On the day of the election, ABC had a report noting: “For Democrats, the race for the state’s 6th Congressional District … will test just how tossup-friendly the Republican-leaning area has become since Biden’s win in November and since the subsequent fallout over the Capitol Hill riot in January.”

They didn’t do a follow-up with the results.

On the other hand, NBC reported on the shutout. “Republicans Susan Wright and state Rep. Jake Ellzey will advance to a runoff in the special election to fill a North Texas congressional seat, NBC News projects — locking Democrats out in the first hotly contested special election of President Joe Biden’s term,” reporter Allen Smith wrote. But unfortunately, his reporting never made it to air.

As per the usual, Fox News Channel’s Special Report was there to give airtime to what the liberal networks would not. “Republicans have killed the Democratic efforts to take away one of their seats in the U.S. House, and the GOP is saying that that is sending a message to Washington,” anchor Bret Baier announced on Monday.

“Rain did not stop Texas voters from casting their ballots in a contentious congressional race over the weekend. A seat Democrats had hoped to flip in Saturday’s special election, but were unsuccessful,” added correspondent Casey Stegall. “Analysts say voters across the state – in particular, the GOP use this as an opportunity to send a clear message to the White House.”

If I were Democrats looking at the state of Texas I would be thinking, “whoa man, maybe we’re not doing so well down there as we thought.” So, yeah, I think there’s a reason for Democrats to be concerned by this.

Further, Baier and Hume discussed the results of the Southlake school board election that purged the board of race-baiters. “So, the voters in that Southlake, Texas community were awake to it and they voted out school board members that had gone along with this stuff in favor of two who would not,” Hume said. “So, I think this is a sign of there’s a backlash coming against this, and it could be nationwide.”

“We saw that with Common Core, which actually ended up being a major election issue for some Republicans about education changes,” Baier added. And Hume made the crucial point that “People are very sensitive to what their kids are being taught.”

But perhaps the liberal media are not picking up the lesson.

BRET BAIER: Republicans have killed the Democratic efforts to take away one of their seats in the U.S. House, and the GOP is saying that that is sending a message to Washington. Senior correspondent Casey Stegall shows us tonight from Dallas.

CASEY STEGALL: Rain did not stop Texas voters from casting their ballots in a contentious congressional race over the weekend. A seat Democrats had hoped to flip in Saturday’s special election, but were unsuccessful.

SUSAN WRIGHT (R-TX, congressional candidate): I think that the America-first agenda is very passionate priority for the people of this district.

WRIGHT: Ron was very active with the constituents, spent a lot of time here in the district with them listening to them, and taking their concerns to Washington and acting on that. And so, I just want to continue to do that.

STEGALL: Former naval pilot and Republican Congressman Jake Ellzey won second. Now the two will vie for votes in a runoff election since neither won more than 50 percent, and the leading Democrat was nudged out.

JAKE ELLZEY (R-TX, congressional candidate): People are worried about the direction of out country.

STEGALL: Ellzey says despite Democrats’ best efforts, once again this election proves the Lone Star State is not going blue.

ELLZEY: This is just the first step in taking back the House in 2022. So, I’m highly encouraged by the numbers that came out the other day.

STEGALL: Analysts say voters across the state – in particular, the GOP use this as an opportunity to send a clear message to the White House.

KARL ROVE: It is a reaction to the Biden administration in what has historically been Republican turf but not by a huge margin in recent years. And yet, to have that kind of a gap to have 62 percent of the people who turned out voting Republican; at 36 – 37 percent voting Democrat, that says something about the relative enthusiasm of the base.

[Cuts back to live]

STEGALL: The date of that runoff election has not yet been announced. Republican Governor Greg Abbott makes that decision, who by the way is up for reelection himself next November.

Let’s get some thoughts from senior political analyst Brit Hume. Good evening, Brit. You know, sometimes we over-read these races that happen before a midterm or before the next election, sometimes they are in fact canaries in the coal mine. What about this one?

BRIT HUME: Well, this is Texas after all, a Republican state and this is a district that has been held by Republicans for a long time. Matt Romney, however, carried it by 12 points back in 2012 and Donald Trump lost it this time – carried it, excuse me – by only three points. So, you get the idea that it has been trending bluer over time as Karl Rove suggested.

So, it’s understandable why Democrats might have felt under the circumstances – it was their new president seemly doing well in the polls and so on – that their candidate might have done better. But they didn’t. They didn’t come close.

So, I think that’s — if I were Democrats looking at the state of Texas I would be thinking, “whoa man, maybe we’re not doing so well down there as we thought.” So, yeah, I think there’s a reason for Democrats to be concerned by this.