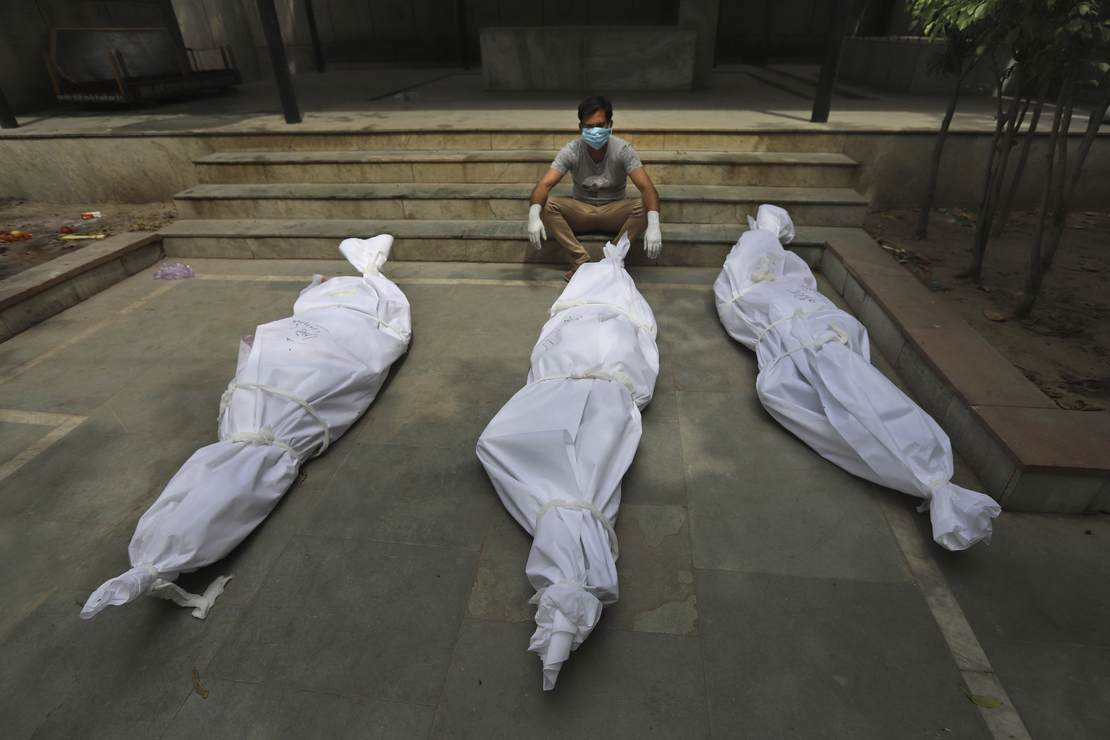 What’s happening in India during their second wave of coronavirus infections is beyond the experience of any other nation. The worst warnings from the CDC about what could have happened in the U.S. if the virus got out of control are being realized in real-time in India.

There are no hospital beds open. Hospitals in Delhi have run out of oxygen. There are few tests to determine if someone died of Covid so the numbers being released by the government are surely being understated. Even with that caveat, there were 323,144 new cases and 2,771 deaths on April 27. The number of new cases is a world record for infections in one day.

Twitter has deactivated accounts critical of the government’s response. The lying by the government and the lack of any reliable news has, in turn, panicked the people and depressed them. Helplessness appears to be the dominant emotion.

On the night of 22 April, 25 critically ill coronavirus patients on high-flow oxygen died in one of Delhi’s biggest private hospitals, Sir Ganga Ram. The hospital issued several desperate SOS messages for the replenishment of its oxygen supply. A day later, the chair of the hospital board rushed to clarify matters: “We cannot say that they have died due to lack of oxygen support.” On 24 April, 20 more patients died when oxygen supplies were depleted in another big Delhi hospital, Jaipur Golden. That same day, in the Delhi high court, Tushar Mehta, India’s solicitor general, speaking for the government of India, said: “Let’s try and not be a cry baby … so far we have ensured that no one in the country was left without oxygen.”

“The number of Covid-protocol funerals from graveyards and crematoriums in small towns and cities suggest a death toll up to 30 times higher than the official count.” “Officially,” there have been 205,000 deaths in India. Thirty times more would be six million dead. It’s probably not that high, but it’s certainly higher than the 205,000 that have been reported.

If Delhi is breaking down, what should we imagine is happening in villages in Bihar, in Uttar Pradesh, in Madhya Pradesh? Where tens of millions of workers from the cities, carrying the virus with them, are fleeing home to their families, traumatised by their memory of Modi’s national lockdown in 2020. It was the strictest lockdown in the world, announced with only four hours’ notice. It left migrant workers stranded in cities with no work, no money to pay their rent, no food and no transport. Many had to walk hundreds of miles to their homes in far-flung villages. Hundreds died on the way.

There are 700,000 villages in India. Most of those villages have no access to modern medical care. People die of diarrhea and TB. Anti-biotics are hard to get, even with India’s vaunted government-run health care. And the workers fleeing Delhi and other large cities usually aren’t tested when they return home. There are no quarantine centers to make sure the virus isn’t spreading. So they bring the virus home with them and the bodies start to drop in the countryside.

The government of Prime Minister Narendra Modi is a Hindu nationalist who was elected by exploiting the division between Hindu and Muslims. He cares more about covering up the catastrophe than dealing with it.

He has a lot of blood on his hands. And there’s no end in sight for the suffering and death of his people.