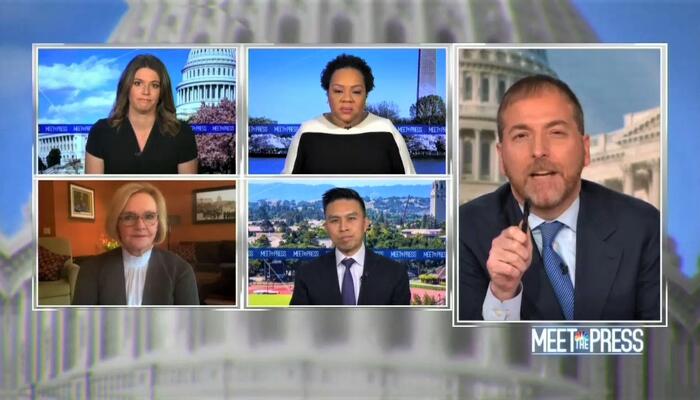 On Sunday’s Meet the Press, NBC host Chuck Todd twice suggested that Sen. Tim Scott daring to claim “America is not a racist country” was going to ruin the chances of passing “police reform.” This weird take first emerged in the opening moments promoting the program that would unfold:

CHUCK TODD: Plus, amid anger over policing —

BEN CRUMP: It was a kill shot to the back of the head.

CHUCK TODD: — could this comment from Senator Tim Scott —

SEN. TIM SCOTT: America is not a racist country.

Then when he assembled the pundits in the second half of the hour, Todd repeated his spin that Todd’s pro-America soundbite was going to put “bipartisan police reform at risk.” But the liberal journalists told him he was wrong.

Subsequent framing from @ChuckTodd during the roundtable after running clip again of @SenatorTimScott saying nation not racist: “Did his comments put bipartisan police reform at risk?” #MTP pic.twitter.com/vOlstAVoFz

TODD: I want to quickly play a comment from Senator Scott and the Republican response and get you guys to react on the other side. Here it is.

TIM SCOTT: Today, kids are being taught that the color of their skin defines them again. And if they look a certain way, they’re an oppressor. Hear me clearly. America is not a racist country.

TODD: Yamiche and Kasie, this sparked a huge debate among quite a few folks about the role of race in the history of America. Here’s my curiosity, Yamiche. Did his comments put police, bipartisan police reform at risk?

YAMICHE ALCINDOR, PBS: I don’t think so, talking to sources, because if you saw the, the day after, President Biden as well as Vice President Harris echoed that statement. They don’t believe America is a racist country. They did, though, say something that Senator Scott did not say, which is that there are consequences to slavery that have completely embedded themselves in American society, from health care, to education, to how the coronavirus pandemic exposed and exploited real inequalities in our, in our country.

But I think talking to lawmakers and talking to the White House, there is this inflection point after Derek Chauvin being found guilty of murdering George Floyd that feels like lawmakers will be able to get some sort of bill at least negotiated and get far in those discussions. So I don’t think this specific comment from Senator, from Senator Scott is going to upend that. And I think Democrats are really trying to lean in to say, “What can we get done on this specific issue?” Because it is so, of course, really all-encompassing when you look at how policing – and African Americans are dealing in this country.

Todd said he had “Lucy and the football” pessimism about this….as if Tim Scott is holding the football for Democrat Charlie Brown. He asked NBC’s Kasie Hunt if she was optimistic. She was:

I am actually optimistic, Chuck. Republicans have a very strong messenger in Tim Scott. They’re lucky to have him. They trust him. I think if it’s going to happen, you’re going to see the majority, the vast majority of Republicans go with it. It’s not going to be Tim Scottand nine other Republicans. So I do think right now, today, it’s possible.