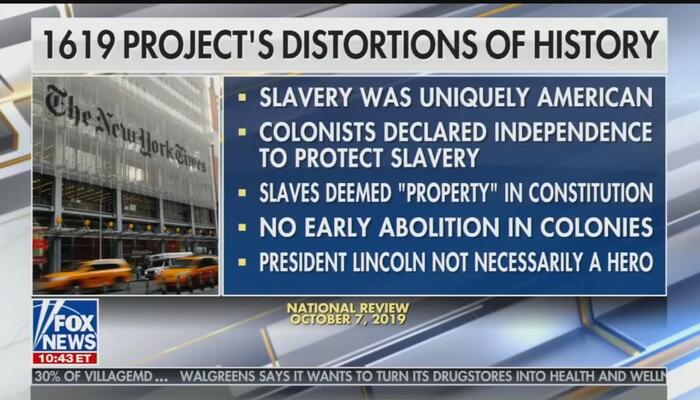 Washington — According to the Washington Times — also known as the Good Times — last week, the Biden administration made plans “to offer grants for U.S. history classes that teach critical race theory and the ‘1619 Project,’” which is a confection of The New York Times. Both critical race theory and “The 1619 Project” are based on the fundamental insight that slavery is, according to the Washington Times, “the centerpiece of the American narrative.”

Now, there is not much a historian can say about people living in forced servitude for roughly 246 years beyond that it was one of the gravest injustices in human history. Slavery was wrong when it was practiced here, and it took the Civil War to eliminate it. It has been wrong when it has been practiced in other countries, and it has been practiced in many other countries. Finally, it will be wrong if it is ever tried again, and I believe it has been tried again. Consider the plight of Uyghurs in China.

Of course, there is another problem with critical race theory and “The 1619 Project.” They are based on fantasies. They are based on such exaggerations as the argument for “systemic racism.” The presidency of Barack Obama proved systemic racism is an exaggeration, as does the presence of Black people in both political parties at pretty high levels.

Yet, if slavery has been “the centerpiece” of the American narrative, I think we can argue that red meat has been even more “the centerpiece” of the American narrative. In fact, red meat was essential to the diet of Americans even before 1619. Actually, wars have been fought because of a shortage of red meat. I think a case can be made for arguing that the Native Americans were pushed out of the Old Northwest because of a shortage of red meat. In fact, it would not be too much to say that “you are what you eat,” and millions of Americans gorge themselves on red meat every day. Consider the menu at McDonald’s and its competitors. Who could gainsay that, today, an awful lot of Americans are walking around carrying huge quantities of meat hanging from them?

Let us give up this divisive talk about an institution that most Americans rejected 156 years ago and begin a more productive effort to erase the vestiges of racism and bigotry. Let us attempt to eliminate educational failure in our schools. Let us go back to a system of schooling that was led by a former slave, Booker T. Washington, a founder of Tuskegee Institute, and his Jewish friend, Julius Rosenwald, the immensely wealthy head of Sears, Roebuck and Co., which, in the early days of the 20th century, he helped turn into the world’s largest retailer. Working together, the educator, Washington, and the businessman, Rosenwald, created 4,978 schools throughout the South and the border states, of which 500 survive.

These two men created an educational and philanthropical miracle that helped generations of Black people. According to The Wall Street Journal‘s weekend edition, “The Rosenwald schools program was a watershed moment in the history of philanthropy, and not only because of its mission, scope and impact. It was also an early example of challenge grants, public-private partnership and a benefactor mandating that all funds be expended within a set period after his death.” Young Blacks such as Medgar Evers, Maya Angelou and Rep. John Lewis were among its graduates. Yet the names Rosenwald and Washington have been lost in the shifting currents of history. It is time to rediscover them and exactly what made their educational systems work.

Some weeks ago, I mentioned in this space an old coach of mine, Tony Lawless, who, from his ethnically diverse high school, lectured the Irish boys, the Italian boys, the Polish boys and maybe a few Blacks and WASPS to forget their grandparents. By which he meant to tells us to forget our grandparents’ feuds with their neighbors and get on with life in peace. People who dwell on grievances are going to dwell on grievances for the rest of their lives.