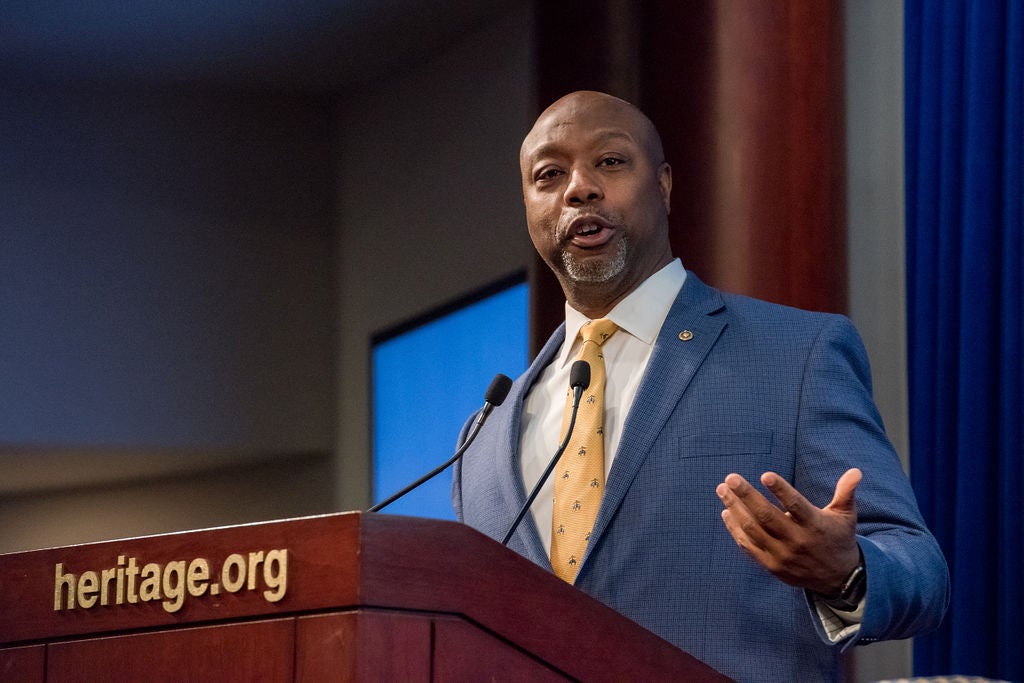 Sen. Tim Scott addressed the American people Wednesday night in response to President Joe Biden’s address to a joint session of Congress. The speech received widespread acclaim for Scott’s blunt assessment of the nation’s problems and commonsense solutions for them.

A week earlier, the South Carolina Republican visited The Daily Signal for an exclusive address to attendees of The Heritage Foundation’s annual Leadership Conference. (The Daily Signal is Heritage’s news outlet.)

Our conversation covered a range of education-related topics, including school choice, COVID-19, and Scott’s personal passion for the issue of education. A lightly edited transcript follows.

Rob Bluey: We are grateful to have Sen. Tim Scott of South Carolina join us for the annual Leadership Conference. We’re coming to you from our Capitol Hill headquarters here at The Heritage Foundation. Senator, you have some opening remarks you wanted to talk about with regard to school choice.

Sen. Tim Scott: Thank you, Rob. Let me say to the Heritage audience out there, God bless you. What you all are doing is so incredibly important to protecting conservatism throughout our land. God bless you for that.

The issue of education could not be more important. I will say, as a kid who grew up in poverty, single-parent household, I went to four different elementary schools by the fourth grade. I understand and appreciate the importance of quality education in every single ZIP code in America.

The closest thing to magic in America is quality education. It is the great equalizer. And so, I look forward to the conversation that we’re going to have, Rob, about the importance of education, because if there is a civil rights issue today that we’ve spent too little time on, it’s the issue of quality education and education reform in our country.

It is the issue that allows for each and every family living in poverty today to believe that the American dream is alive, it is well, and healthy, and coming their way. I look forward to the questions.

Bluey: Thank you, Senator. And we appreciate your passion for this issue. You mentioned ZIP codes. So much of American education has been based on ZIP codes in this country. You have legislation called the Choice Act, which would give parents the choice to make decisions that can really empower them to go beyond kind of the traditional way we think about it. Can you explain what it would do?

Scott: Certainly. The Choice Act really focuses on giving parents a choice—so kids have a chance. Something that’s been said a thousand times in the space of educational reform, but it’s true. The more we focus on giving and equipping the parents with options, the more likely their kids are to realize their full and maximum potential.

What the legislation does is exactly that. It provides parents with more options in their portfolio to make better decisions for their kids. And it doesn’t matter whether you are a parent living on a military base. God bless those who put on the uniform to serve our country. Those kids in those households perhaps may need some options.

Think about parents who have kids with special needs. I have a couple of folks in my office who have special needs. Having the right education platform for one of my employees, named Patrick—I want his parents, lovely people, to have the ability to choose the place that is best-suited to make sure that Patrick realizes [his] full potential. And we also focus on kids … .

The Title II funding are the special kids with special needs or the [Individuals with Disabilities Education Act] funding. So, we also focus on making sure that other parents, as well, have an option to see that their kids realize their full [potential].

Bluey: I’m glad you brought up military families. Obviously, we know that military families are often on the move. Sometimes, their kids are placed in underperforming schools. What would it mean specifically for them when they maybe get relocated to a new community?

Scott: Rob, I’ll tell you, folks who go from base to base every two or three years. It sounds very comfortable sitting in a wonderful environment, like where we are today. And the truth is, for a lot of parents, part of the butterflies they feel in their tummies is “What will happen to my kids in the next place? Will there be good schools, bad schools, schools that are far away?”

What the Choice Act does is, it starts a pilot program that allows for certain places just to study the opportunity and open the door of opportunity for parents on the base to be able to send their kids to the school of the parents’ choice, as opposed to, unfortunately, there are a lot of bases that are right where we need them to be, to protect us, right where they need to be to train our soldiers, but they’re not necessarily in the best place to educate our kids.

The Choice Act gives the parent a different kind of arsenal, gives them the arsenal of choice.

Bluey: That’s great. Well, right here, in Washington, D.C., there is a landmark program called the D.C. Opportunity Scholarship Program. You have been a strong advocate for it, along with my colleagues at The Heritage Foundation, and many other members of Congress. So far, since its foundation in 2004, it’s served 10,000 students, probably more than that, who have gone on to a better life as a result.

Can you speak about this program specifically and what it means right now with the new administration in Washington? Will we be able to save it and keep it going?

Scott: Well, two very important questions. First question: What it means to those 10,000-plus kids. … If you go to one of the D.C. Opportunity Scholarship schools, the chances of you graduating are around 93%. You go to one of the other public schools, closer to 50%. The chasm between those two educational pathways for a lifetime of earning is in the millions of dollars. So, it means a whole lot to the 10,000-plus kids who have been equipped with the opportunity to reach your full potential.

I’m glad that we’ve been able to keep that program running for the last nearly 17 years. And also, it means a lot further for the community and for the nation. It is tremendously important. So, here’s the question, your second question: How do we, with this new administration, protect school choice across this country, and specifically here in D.C.?

It’s going to take folks like Heritage to stay engaged, to be a loud public voice on behalf of kids who, sometimes, they feel speechless. Sometimes, they feel invisible. What you all can do because of this conference is to empower folks here in D.C. to keep making the right choice, in a bipartisan fashion.

Bluey: Well, they certainly should. And I know you and I have had both the opportunity to hear some of the incredible stories coming out of people who’ve benefited, particularly students who’ve benefited from these programs. And so, it’s just incredible. Senator, as a parent myself, somebody who has two kids in elementary school who spent most of the past year at home and back two days a week, I know that COVID and some of the changes that we’ve seen in education over the past year are on the minds of a lot of parents.

How has that impacted school choice in a positive way, in terms of giving parents more options, as they seem to get around maybe public schools that aren’t necessarily performing at the level that they think they should?

Scott: Absolutely. Well, Rob, one of the things that’s really important to note is during the midst of this pandemic, private schools were consistently open when public schools were consistently closed. We’re giving $700-plus billion as a nation to public education. And we can’t keep our doors open? And we give pennies on the dollar to private schools and yet their kids are thriving, not just surviving, through the pandemic.

African American parents have never had a higher approval of school choice than they do today. Hispanic parents, of course; white parents; all parents see this differently … but here’s what we know: Not every single parent is designed to be a homeschool parent and a homeschool teacher.

We’re asking our parents to do some things that they may not be equipped [to do]. And if you’re a parent, like the one I had, an amazing, loving mama, she can’t be at work and at home. So school choice has become more and more important because of the pandemic. And frankly, we can now see more clearly because of the pain and the crisis that we’ve just endured.

Bluey: And I hope it’s opened people’s eyes who may have been skeptics before. What is your message? You talked about the importance of this being a bipartisan issue. It’s really a commonsense issue. How do we convince those who may be skeptical about school choice if they’d heard things from teachers unions or Big Labor about it in the past? What’s your message to them?

Scott: Well, I would simply say if you want kids to have the brightest future, if you want every American to achieve the American dream, one of the most important foundational stones is education. We have an opportunity to do the right thing, not for adults, in education, but for the focus of education, the kids.

School choice, whether that’s public, private, virtual, charter, or homeschool gives the parent the arsenal necessary to win the war of their kids’ future. We should all be participants in creating that better future.

Bluey: Well said, Senator, thanks so much for joining us at the annual Leadership Conference. We’re grateful for your work on this issue. And we look forward to staying engaged.