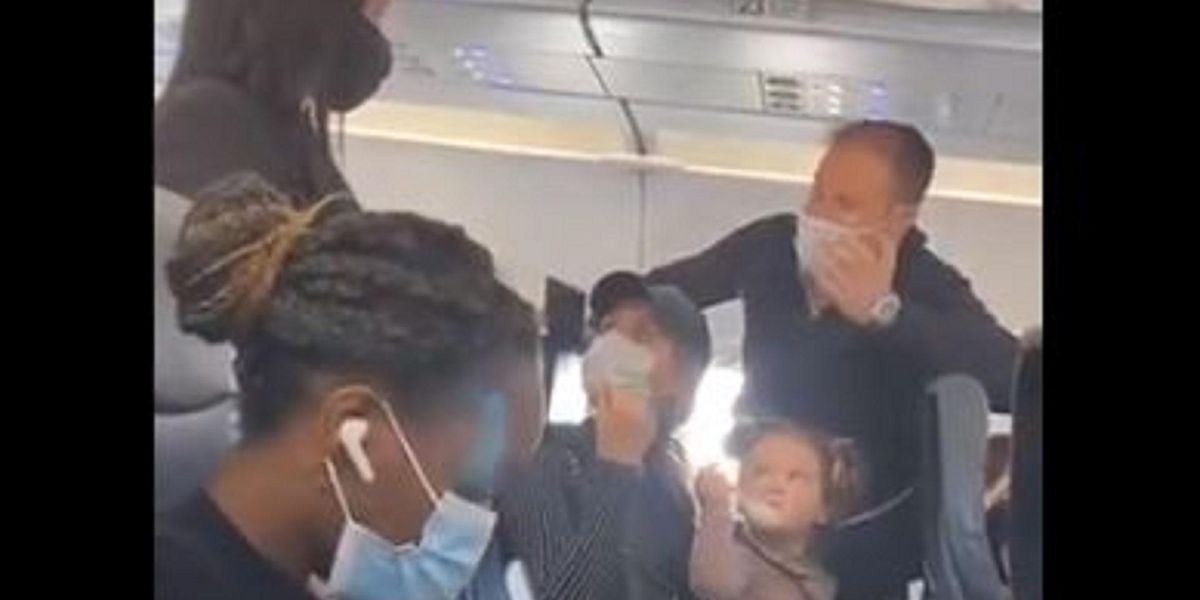 A video went viral Monday showing a family being temporarily booted from a Spirit Airlines flight over alleged mask violations, sparking outrage on social media as a flight attendant was seen noting that the couple’s 2-year-old was not wearing a facial covering while she was eating.

The airline said the situation had nothing to do with the toddler, but that compliance with the federal mask mandate was the issue.

Initial footage circulated online showed a flight attendant approaching a couple and asking them to “pick up [their] stuff” and get off the plane due to “non-compliance with the masks.”

The husband and wife argue that they have been wearing their masks, and the attendant points to their toddler — who is seen eating with a spoon — and says, “she’s not wearing a mask.”

At that point, other passengers step in to defend the family, asserting that other young children on the flight had their masks off and that the parents had also been in compliance. The attendant then claims she’s going to call the police.

WATCH THIS: A family was just kicked off a @SpiritAirlines flight from Orlando to NY, because their two-year-old ch… https://t.co/Z6jqYxBJzW

In a follow-up video, the father expressed his outrage over the situation, saying that the confrontation was planned before they even got on board and that “the whole plane was OK with it” but that “there was one African American that was not OK with it.” The dad pointed out that his wife is pregnant, and said they also had their special needs son in tow.

More from the @SpiritAirlines flight. https://t.co/PMq2nArVWz

The father said in a later video that there was “a happy ending” and that they were back on the flight.

“I think they removed that steward that wanted us off for no reason,” he added.

Happy ending for the family kicked off Spirit Airlines! Everyone got back on they kicked the flight attendant off i… https://t.co/RpIZhd01w2

The Daily Mail reported that a male flight attendant who purportedly had an issue with the family was kicked off the plane, publishing a picture showing a black man walking while towing luggage as an apparent police officer walks ahead of the man.

But Spirit Airlines says there are a lot of untruths being reported about the incident.

A spokesman for the airline told TheBlaze:

I want to emphasize that this was not about a two-year-old. Social media videos only captured a small part of what happened today. This flight was delayed because of the behavior of adults, which happened prior to any videos. There is also no truth to claims that police became involved with or removed a flight attendant. Orlando police have stated publicly that, though present at the gate, they did not take an active role in this situation.

We’re aware of incorrect information circulating about Spirit Airlines Flight 138 from Orlando to Atlantic City. The flight was delayed due to adults who did not comply with the federal mask requirement. We allowed the Guests to continue on the flight to their destination after assurances of compliance.

Spirit Airlines has made headlines twice before this incident over separate instances of booting autistic children from their flights due to noncompliance with masks.

The Left is Using the Supreme Court Commission to Change the Court’s Decisions, Not to Improve the Court
Pelosi, Sanders move goalposts on massive infrastructure bill, claim it’s about ‘human infrastructure’
Ex-NFL player suspected in murder of doctor, doctor’s wife, their 2 grandchildren, and an HVAC worker
Should Government Track the Miles You Drive?
TV Reporter Buries Inconvenient Fact that ‘Hate Crime’ She Is Covering Is a Hoax