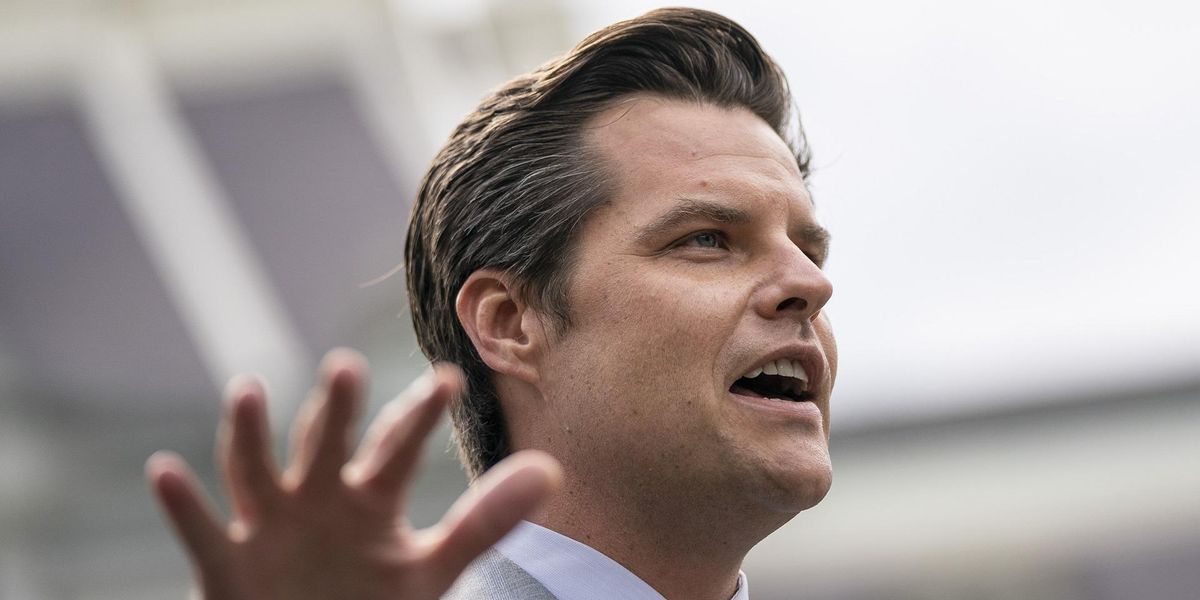 Florida Republican Rep. Matt Gaetz has come out swinging back amid the Department of Justice’s investigation into allegations that the congressman engaged in sex trafficking of a minor, penning an op-ed saying that he is “not a monk” but also “certainly not a criminal.”

In a piece published in The Washington Examiner on Monday titled, “The swamp is out to drown me with false charges, but I’m not giving up,” Gaetz wrote, “Let me first remind everyone that I am a representative in Congress, not a monk, and certainly not a criminal.”

“Nancy Pelosi once defended President Bill Clinton after he got an intern to fellate him in the Oval Office,” he continued. “But when it comes to the allegation that I, a grown man, paid for an adult girlfriend’s expenses? Well, consider that a bridge too far for the power-hungry hypocrites.”

The congressman went on to write, “I want to be clear about something as we process the leaks and lies from the past week. To this point, there are exactly zero credible (or even non-credible) accusers willing to come forward by name and state on the public record that I behaved improperly toward them, in the manner by which Democratic Gov. Andrew Cuomo has ten accusers.”

Gaetz predicted in his op-ed that “anti-Trump cheerleaders such as Meghan McCain” and others would call on him to resign. Sure enough, McCain did so Monday on “The View.”

He further noted that he “defended Rep. Katie Hill’s ‘throuple’ when her own Democratic colleagues wouldn’t.” Also on Monday, Vanity Fair published an op-ed by Hill where she acknowledged that Gaetz was one of the few people who defended her after nude photos of her were leaked online, but said now he is “accused of doing just that” and should resign “immediately” if any of the allegations are true.

Katie Hill resigned after she was hit with an ethics investigation over allegations that she was sleeping with one of her legislative staffers, which violates House rules that were implemented after the #MeToo movement.

In his op-ed, Gaetz continued to deny any wrongdoing and reiterated — as he has since the initial allegation that he slept with a 17-year-old and subsequent claims that he paid for drug-fueled hotel romps — that he is “absolutely not resigning.” He vehemently denies the claims.

After the initial allegations against Gaetz came out in The New York Times, he said that the DOJ investigation was part of a criminal extortion plot led by former Justice Department official David McGee. McGee forcefully denied Gaetz’s claims.

Gaetz did not mention the alleged plot in his op-ed.

Gaetz’s congressional office also held a news conference Monday where his former military director, Nathan Nelson, expressed his doubts that the Justice Department’s investigation into Gaetz has any merit.

Nelson left Gaetz’s office in late October of last year, The New York Post reported, in what he called a “planned departure” in order to support “the military missions in a private capacity” in the Florida Panhandle.

Nelson explained that the FBI showed up at his home and interviewed him shortly after the allegations against Gaetz hit the news, and agents claimed media sources had contacted them asserting that Nelson left Gaetz’s office because of the accusations surrounding the congressman.

The former Gaetz staffer told the media, “I’m here this morning to state that nothing could be further from the truth. Neither I nor any other member of Congressman Gaetz’s staff had any knowledge of illegal activities.”

He added, “This baseless claim against me leaves me further convinced that the allegations against Congressman Gaetz are likewise fabricated and merely an attempt to discredit a very vocal conservative.”