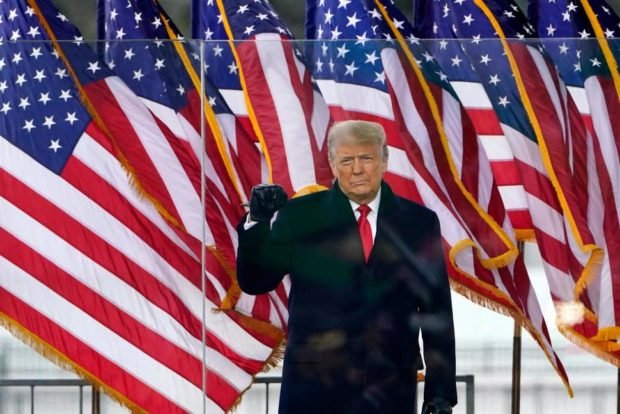 The lying Democrats have been going crazy for over a month with their lying report of Trump supporters planning an attack on the Capitol building and taking over the government in order to re-install Donald Trump as president on March 4th-  the original inauguration date earlier in America‘s history. Democrats relied on far-left intelligence reports that were fabrications. They spun fake tales of far-right domestic terrorism while ignoring the death and destruction that the leftist forces of ANTIFA and BLM committed all summer long in 2020.

In order to show how big and bad the Joey Biden administration is, they installed 5000 National Guard troops and miles of concertina wire around the Capitol, on the vaguest rumor of right-wing attacks, all based on the January 6th attack on the Capitol building that actually did happen, and it happened because the radical left in the DC city government and in the Democrat House of Representatives wanted it to happen, so they could make President Trump look bad, and to be able to blame something on Trump supporters. Democrats are desperate for culprits on the right to identify as terrorists, but even the January 6th event, although regrettable, was not overtly violent; nothing was burned as the American cities were all summer in 2020, and no guns were found on any of the rioters in attendance in the Capitol building.

But DC storefronts remain boarded up in expectation of right-wing rioting, Democrat politicians took the day off yesterday in fear of their lives from Trumpers, and all day long the likes of CNN were wringing their hands in hopeful expectation of something to happen, but it didn’t. This non-event is just proof, as if any were needed, that Trump supporters are not violent and only want the government promised them by our constitution.

Are the troops in DC, and the concertina wire around the Capitol, and Nancy Pelosi calling Trump supporters racists and terrorists, and the boarded-up storefronts, anything like the “consent of the governed” our nation supposedly represents? Democrats assumed control of all three branches of government after the 2020 election, but instead of being happy and behaving like responsible, sensible people just doing the work of the people, they have become completely unhinged, violent, unreasonable people intent on imprisoning their political rivals for no reason at all and issuing idiotic executive orders that undermine the basic tenant of the consent of the governed.

The violence all summer long, burning, beating and killing, is not something Democrats worry about, but a single incident at the Capitol building in which no fires were set and no rioter carried a weapon, is all the leftist fools can talk about. But the soldiers and the barbed wire will remain in our nation’s capitol for at least several months because we all know how violent Trump supporters are, unlike the leftist mobs who attacked the White House in June of 2020, forcing the first family into shelters and burning a nearby church.

George Floyd’s younger brother breaks down in court remembering ‘the leader of our household’
Chauvin Trial Bombshell: ‘I Ate Too Many Drugs’
Are Successful Legal Challenges to Biden’s Abuses of Power Finally Coming?
Hunter Biden Acknowledges Only Four Of His Five Children In Memoir, Ignoring Love Child He Had With Stripper
U.S. states face steep decline in J&J Covid vaccine amid production problems at Baltimore plant