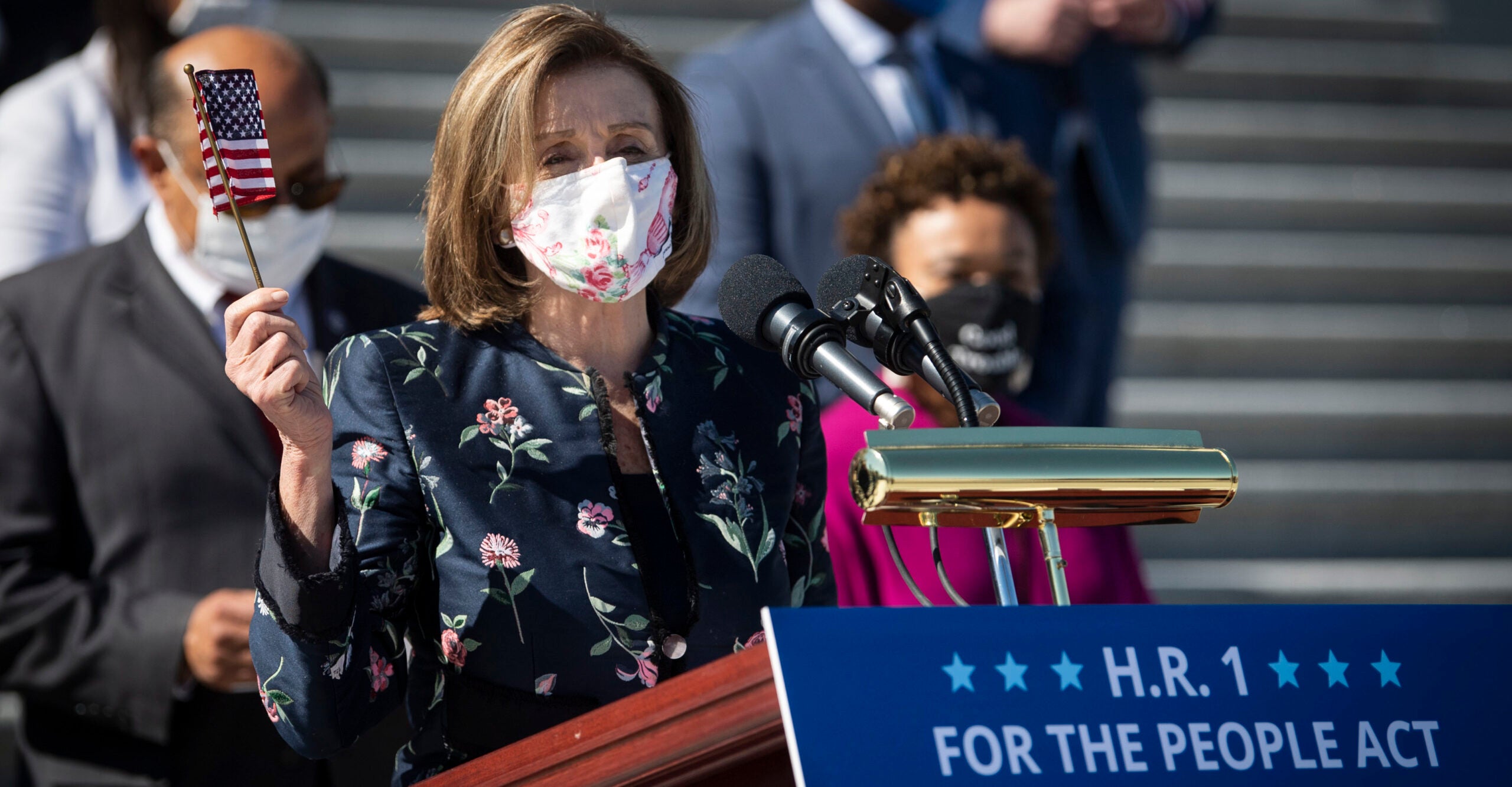 Voter ID laws and most other election integrity measures in the states would be nearly wiped out under a sweeping bill passed late Wednesday night by House Democrats that also makes felons eligible to vote while expanding Election Day registration and the controversial practice known as ballot harvesting.

The House voted 220 to 210 along party lines for the bill, which also includes massive public financing for campaigns of $6 in tax funds for every $1 a politician raises in private funding.

No Republicans joined Democrats in voting for the legislation, Fox News and other outlets reported.

HR 1, or the For the People Act, was the top priority for House Democrats. But critics see the legislation, if passed and signed into law by President Joe Biden, as a federal takeover or nationalization of elections. Historically, states run elections.

The companion bill in the Senate, S 1, likely will have a more difficult time because that chamber is split 50-50,  although Vice President Kamala Harris, as president of the Senate, gives Democrats a one-vote majority.

In a statement of administration policy, the White House called HR 1 “landmark legislation [that is] urgently needed.”

“As with any bill of this scope and complexity, the Administration looks forward to working with Congress to refine provisions of HR 1 as it proceeds through the legislative process to ensure that the bill achieves lasting reform consistent with Congress’ broad constitutional authority to strengthen our democracy,” the White House statement from Monday says.

If passed by the Senate and eventually signed into law in its current form by the president, the legislation effectively would repeal state voter ID statutes.

The measure requires states to allow individuals to vote without identification and instead sign a statement that they are who they claim to be. So, although the bill wouldn’t explicitly ban voter ID laws, it would create a workaround.

If enacted, the elections overhaul would ban witness signatures or notarization requirements for mail-in or absentee ballots. It also would require states to accept absentee ballots up to 10 days after Election Day as long as they are postmarked by that date.

At a rally in front of the Capitol steps Wednesday before the vote, House Speaker Nancy Pelosi, D-Calif., compared the moment to the American Revolution, saying, “This reminds me of what it might have felt like at Valley Forge.”

“We expand voting rights, we fight political gerrymandering, and we crack down on corruption,” Pelosi said.

Although HR 1 focuses on voting and campaign finance, the House speaker said that if the legislation passes, it will make it easier for Democrats to address other items on their agenda:

If we come down on the side of the people’s interests not the special interests, we will be able to have policies that are for the people, policies that help us build back better, end a pandemic, address economic disparities, end gun violence by promoting gun violence prevention which we hope to do shortly, to have a national reckoning on racial injustice, and to address the surging climate crisis, just to name a few.

“Build back better” was a Biden campaign slogan.

The legislation also would set up federally funded campaigns for national office, providing a 6-1 match.

“HR 1 sends public dollars to fund political campaigns, not to build roads or bridges, but to add 600% to every small dollar donated by Americans,” House Minority Leader Kevin McCarthy, R-Calif., said in a video posted ahead of the vote.

McCarthy said the more appropriate title for the bill, rather than the For the People Act, would be the “For the Politicians Act.” He said:

HR 1 would legalize voting for convicted felons all over the country even if they were convicted of election fraud. … In most cases, this would actually prevent officials from removing ineligible voters from the rolls, and would make it much more difficult to verify the accuracy of voter information, so future voters might be underage, dead, or illegal immigrants.

If enacted, the law also would require states to restore voting rights for felons as soon as their sentences are completed. This provision faces a constitutional test, because Section 2 of the 14th Amendment grants states the authority to decide if and when felons may vote again.

States would be required to automatically register all individuals to vote without that individual taking the initiative. States would pull voter information from state and government databases, such as a state Department of Motor Vehicles, the U.S. Social Security Administration, or corrections and welfare agencies. Such databases are not limited to U.S. citizens, the only ones legally eligible to vote in federal and state elections.

The legislation also would require states to allow teens age 16 and 17 to register to vote. However, a voter still would not be legally allowed to vote until age 18.

Some states already allow voters to cast a ballot in a primary at age 17 if they will be 18 by the time of the general election.

If the bill is enacted, the federal government would require states to count all ballots that a voter cast, even in the wrong precinct.

The legislation also would overhaul redistricting for election purposes after the next census. It would require states to appoint bureaucracies to draw congressional districts rather than allow state legislatures to draw the districts.

Also, the measure would require that noncitizens, both legal and illegal, be counted in drawing up congressional districts. This provision is particularly prone to a constitutional challenge because states long have had purview over the drawing of  election districts.

The legislation would restrict jurisdictions in how they clean up voter registration rolls. Election officials could not evaluate voter eligibility through the U.S. Postal Service’s national change-of-address system to verify the address of registered voters. Election officials also would be restricted from using state programs that compare registration lists to determine whether individuals are registered in multiple states.

The six-member Federal Election Commission would cease being an evenly divided, bipartisan body with three members from each political party. The legislation would limit the presidentially appointed FEC to five members, with one side getting a partisan advantage.