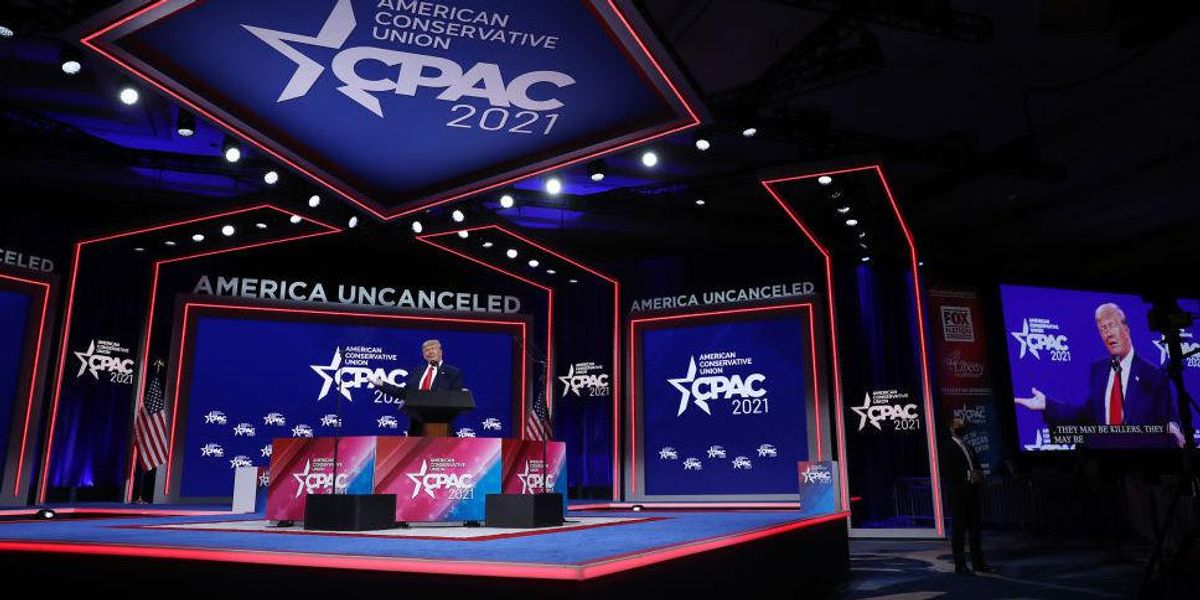 Liberals claimed over the weekend that the stage used at the Conservative Political Action Conference resembled symbols used by German Nazis.

But, as it turned out, the stage was designed by a Maryland-based company that designed stages for President Joe Biden and whose owner is a Biden supporter.

Who designed the stage?

According to Forward, the company responsible for designing the stage, Design Foundry, said the stage was designed to make best use of the conference space — not to propagate Nazi hate.

The company told Forward that it “had no idea that the design resembled any symbol, nor was there any intention to create something that did.”

In fact, the contract between Design Foundry and the American Conservative Union — the umbrella organization that hosts CPAC — stipulates that Design Foundry alone is responsible for the stage design.

“The designs, renderings, drawings, specifications, materials and other documents used or created as part of the proposal are owned by Design Foundry,” the contract states, according to Forward.

Meanwhile, Design Foundry has also worked with MSNBC, Google, Target, and Citibank, among other major companies.

Additionally, journalist Yashar Ali revealed that Design Foundry has worked with Biden and that the company’s owner is “very liberal” and supports Biden.

I know Design Foundry because they handle design for many events in DC for companies like MSNBC & Target.
They oversaw the design for the Biden Cancer Summit in 2018.
The owner, Annie, is very liberal and was so excited for Biden’s victory.
Great work conspiracy theorists.

Also worth noting that many of her employees are liberal. So many of you decided to go after something without any reporting or knowledge about who was responsible for the design.
And before you ding her for working for CPAC, you try having an events business during a pandemic.

1. I know Design Foundry because they handle design for many events in DC for companies like MSNBC & Target.

Viral social media posts claimed over the weekend the stage used at CPAC was designed to resemble Nazi insignia.

“Has anyone else noticed the shape of the CPAC stage is the Odal Rune/SS insignia?” one post claimed.

Has anyone else noticed the shape of the CPAC stage is the Odal Rune/SS insignia? https://t.co/TCns4B1tq8

“The #CPAC stage is designed to be a rune used by the Nazis. Curious if @Hyatt is okay with Nazi symbols being used on their properties like this?” another viral post by Morgan J. Freeman — the filmmaker, not the actor — claimed.

The #CPAC stage is designed to be a rune used by the Nazis. Curious if @Hyatt is okay with Nazi symbols being used… https://t.co/w83LPVtMKY

Despite objections from CPAC organizers saying their stage was not, in fact, a Nazi symbol, Hyatt Hotels, which hosted CPAC at the Hyatt Regency in Orlando, Florida, appeared to lend legitimacy to the outcry by responding to the charges.

“We take the concern raised about the prospect of symbols of hate being included in the stage design at CPAC 2021 very seriously as all such symbols are abhorrent and unequivocally counter to our values as a company,” Hyatt said.

What did CPAC say?

The organization said it would no longer work with Design Foundry.

“It’s clear that the company we retained designed a stage that has become an unwelcome distraction. As a result, we will not be using that company’s services going forward at future events,” Ian Walters, director of communications for the ACU and CPAC, told Forward.