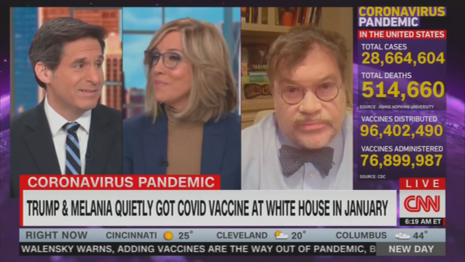 CNN this morning mocked former First Lady Melania Trump for not publicly revealing that she and her husband received coronavirus vaccinations in January before leaving the White House.

When New Day co-host John Berman complained out loud “how many lives could have been saved” if President Trump had revealed their vaccinations and promoted vaccinations to Americans, fellow host Alisyn Camerota interrupted to add, “and First Lady!” Berman obediently agreed: “and First Lady,” thereafter making it a point to include Melania in the denunciation, even nodding to Camerota when he later mentioned her.

At the end of the segment, Berman sarcastically asked Camerota, “is that Be Best? You think that’s Be Best?” That was of course a reference to Melania’s “Be Best” program, which encouraged children to be their best while focusing on well-being, online safety, and opioid abuse.

I think we can guess that if the Trumps announced they were vaccinated in January, CNN probably would have criticized them for wasting a vaccine when they had already been infected by the virus. Because CNN will criticize them coming and going.

So is it accurate that the Trumps didn’t encourage vaccines? Trump constantly touted how vaccines would turn the corner on the virus. Here’s Melania on the campaign trail in October:

Did Berman and Camerota criticize Kamala Harris when she told CNN’s Dana Bash last September she wouldn’t trust a Trump-backed vaccine? Of course not. They cued up Biden campaign stenographer Arlette Saenz on September 8:

SAENZ: Now, this comes as the president has accused Biden and his running mate, Kamala Harris, of playing politics and is calling on them to apologize for what he believes is an antivaccine message.

But what both Biden and Harris were just making clear with their statements is that they want this to be a scientifically-backed process and that they’re concerned that it’s the president who is the one that’s playing politics.

Check the screencap to see how the nasty pair delighted in their mocking of Melania.

So is that CNN’s new standard for First Ladies? If they disagree with their husband’s policies or behavior, they should speak out publicly about it?

Okay, then! Stand by for CNN to denounce Dr. Jill for failing to publicly admonish Sniffy Joe for his grabby tendencies. Just don’t hold your breath.

Note: Berman brought in Peter Hotez, one of CNN’s stable of Trump-denouncing docs, to agree that it would have made a “big difference” if President Trump had revealed the vaccinations and encouraged Americans to get them.

JOHN BERMAN: So, overnight we learned that the former President of the United States got vaccinated in private. Never told us about getting vaccinated, and for months after he lost the election he didn’t say anything encouraging people to go get vaccinated. What’s going on here? How many lives could have been saved if the former president —

BERMAN: — and First Lady, actually promoted the idea of vaccinations? That’s next.

BERMAN: So Dr. Hotez, you have a book out about anti-science, and it’s interesting to me that we only learned overnight that the former president [nods to Camerota]—and former First Lady—received a dose of a coronavirus vaccine in January, right?

The former president bragged all the time about accelerating the research and development and approval of the vaccine, but then once it was approved he went silent. I mean, the vice-president was the one front and center getting vaccinated on television and the former president really, in his final months in office, did nothing to tell people to go get vaccinated. There’s plenty reason to believe it was because he was trying to curry favor with the anti-vac political movement, which, there was a lot of overlap with the people who were the election-deniers there. But how much of a difference would it have made if the former president went out there every day to tell people to get shots?

DR. PETER HOTEZ: John, I think it would have made a big difference.

CAMEROTA: Right! They had a chance. He and Melania Trump had a chance to do something for humanity, to be role models. And they chose to keep it a secret. There’s no other way to interpret that! The president, who loves a show, who loves to put everything on camera, kept it a secret.

CAMEROTA: [Chuckles] In private. Only in private.