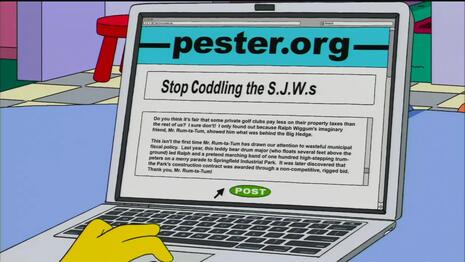 Though often an equal opportunity lampooner, The Simpsons has a habit of every once in a while letting its left-wing freak flag fly. This week’s episode had pro-Marxist and SJW leanings while also attacking crony capitalism, “right-wing trolls,” religion, and churches’ tax exempt status.

On February 28’s episode “The Wad Goals,” Bart starts to earn a “wad” of cash as a caddy who perfects the art of sucking up to the golfers at Springfield’s secret golf club to get better tips. Marge is quickly appalled at the “gross” idea of her son sucking up to rich people for money, so much so that she and Lisa devise a plan to shut the golf club down.

It’s worth noting that when Marge does turn to Homer, he reminds her that “sucking up is the American way. In this country, everybody got together and decided that all the money should belong to a few dozen families and their favorite suck-ups. Don’t you remember when we all decided that?” Homer reminds Marge that “of all the things that Bart might do for money, this is by far the most legal,” but there’s still no celebration of her son’s work ethic.

When Homer does speak to Bart, his son pays him twenty dollars to tell Marge he tried, though of course mother and daughter have bigger tricks up their sleeves:

Marge: Right. They are. How so?

Lisa: Wow, look at all these. Waste of water resources, pesticide use, history of sexism and racism…

Marge: And Bart’s a suck-up!

Lisa: Not to mention that private clubs get huge breaks on their property taxes, which is completely unfair. Why shouldn’t rich people pay their share?

Marge: Lisa, we’ve got to shut down that club. We’re going to city hall! …

Lisa: Okay, Mom. You got to get your voice out there. Take the cause directly to the people with an online petition.

Lisa: No! “S.J.W.” Stands for “Social justice warriors.” That’s what right-wing trolls call anyone who cares about positive social change. Look at the other online petitions your “Supporters” have backed.

The other petitions included “Build A Wall On The U.S.-Taliban Border,” “A National Day Without Seatbelts” and “Upgrade The Second Amendment To First.”

When it’s revealed that the golf club will have to pay a “huge property tax increase,” Bart earns his wad even more so once he gives the golf club’s president the inspiration to turn the golf club into a church:

Club President: Why are charities and churches the only ones that don’t have to pay taxes? It’s preposterous.

Bart: Yeah, man, this place is better than any church. Everyone wants to come here on Sunday, people are always shouting out the Lord’s name and, instead of wafers and wine, you get club sandwiches and scotch in a plastic cup!

Mayor: As of today, the sport of golf is officially declared a religion. The Springfield Junipers Golf Club is now a house of worship. Like all religions, golf will be completely tax-exempt, adhering to the core American credo that churches rake it in but pay nothing. May Golf have mercy on us all.

Boy, do they go all out to make the golf resort into a church:

Marge: Thank you for coming, Your Holinesses. Once you see how these golfers are cheapening the whole idea of religion, you’ll put an end to this sham.

Reverend Lovejoy: You want me to cast judgment on a faith other than my own? Well, twist my arm.

Rabbi: MM? Congregants, scripture, prayer– looks like a house of worship to me.

Marge: These aren’t commandments. They’re jokes I don’t get.

Rabbi: Look at this! It’s like the high holidays every day. I should be so lucky.

Reverend Lovejoy: Marge, I’m sorry, but I think this religion checks all the boxes.

Ultimately, the golf club gets destroyed by Bart and his friends crashing their new “death mobiles” into the place, after Bart is fired and replaced with the snooty Chadlington, a former caddy. Conveniently, the police also show up to arrest the club president, on account of him having a sex cult, complete with participants dressed up in pope’s hats and other garbs, just “like every new religion” does.

At least Marge got involved in a cause she cared about though, right? Well, not really. She admits to Bart, “I’ve said a lot to you about this job, except what’s deepest in my heart. Honey, the thing I’ve always admired most about you is that you’ve never needed anyone else’s approval. And I’m worried you’re gonna lose that…. Promise me these golf people won’t take away my special little guy, because they seem to get everything else they want.”

Virginia Lt. Gov. says rival Dem ‘treated me like George Floyd’ by calling for his resignation after assault claims
Faux Psaki: ABC Plays WH Spox for a Day, Touts Biden’s Infrastructure Plan
Look Out! A Bipartisan Blue-Ribbon Commission Is Coming This Way!
9 Things You Need to Know About Biden’s ‘Infrastructure’ Spending Plan
TV Reporter Buries Inconvenient Fact that ‘Hate Crime’ She Is Covering Is a Hoax