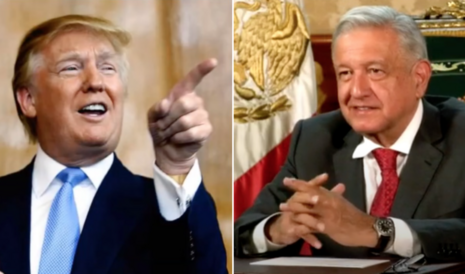 After a year of bizarre news, it appears Mexico is building a wall of world leaders to protect President Donald Trump’s freedom of speech.

“Mexico’s president vowed Thursday to lead an international effort to combat what he considers censorship by social media companies that have blocked or suspended the accounts of U.S. President Donald Trump,” AP News reported Jan 14.  President Andrés Manuel López Obrador declared that plans to make this anti-censorship coalition take action are already underway: “I can tell you that at the first G20 meeting we have, I am going to make a proposal on this issue,” he declared. Obrador acknowledged that while, “social media should not be used to incite violence,” it should never be used “as a pretext to suspend freedom of expression.” Obrador asked: “How can a company act as if it was all powerful, omnipotent, as a sort of Spanish Inquisition on what is expressed?”

“Given that Mexico, through our president, has spoken out, we immediately made contact with others who think the same,” Foreign Relations Secretary Marcelo Ebrard commented. AP News illustrated that Mexico’s government had reportedly “heard from officials in France, Germany, the European Union, Africa, Latin America and Southeast Asia.”

Obrador previously made an international stir by refusing to congratulate President-elect Joe Biden until the Trump Campaign’s legal challenges regarding voter fraud were concluded. Obrador explained: “we are going to wait until all the legal matters have been resolved,” at a news conference in early November. Reuters observed that Obrador “linked his caution to his own allegations of fraud in two presidential elections he contested.”

AP News also recounted how German Chancellor Angela Merkel acknowledged via her spokesman that censoring Trump was “problematic.” The same article then noted Polish prime minister Mateusz Morawiecki demanded new regulations against Big Tech censorship. And while not mentioning Trump by name, Morawiecki proclaimed: “the owners of corporate giants should not decide which views are right and which are not.”

Bloomberg news reported that the European Union, long seen as an ossified, left-wing project, is outraged at Big Tech’s censorship of Trump:

“Junior Minister for European Union Affairs Clement Beaune said he was ‘shocked’ to see a private company make such an important decision. ‘This should be decided by citizens, not by a CEO,’ he told Bloomberg TV on Monday. ‘There needs to be public regulation of big online platforms.’ Finance Minister Bruno Le Maire earlier said that the state should be responsible for regulations, rather than ‘the digital oligarchy,’ and called big tech “‘one of the threats’ to democracy.”

Australian Deputy Prime Minister Michael McCormack similarly accused Big Tech of “censorship” following the U.S. Capitol riot on Jan. 6. “There’s been a lot of people who have said and done a lot of things on Twitter previously that haven’t received that sort of condemnation or indeed censorship. But I’m not one who believes in that sort of censorship,” McCormack said. He was severely criticized by Amnesty International for comparing the U.S. Capitol Riot to the Black Lives Matter protests that raged throughout 2020 ending in deaths and billions in property damage during a global pandemic.

Conservatives are under attack. Contact your local representative and demand that Big Tech be held to account to mirror the First Amendment while providing transparency, clarity on “hate speech” and equal footing for conservatives. If you have been censored, contact us at the Media Research Center contact form and help us hold Big Tech accountable.