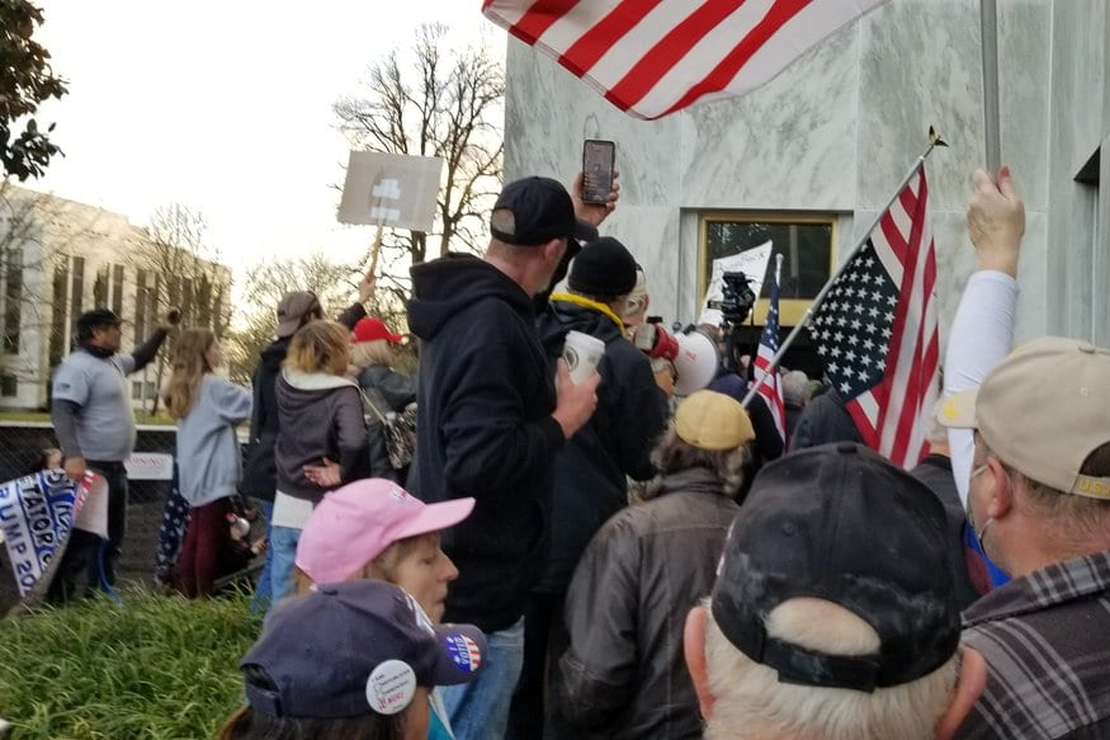 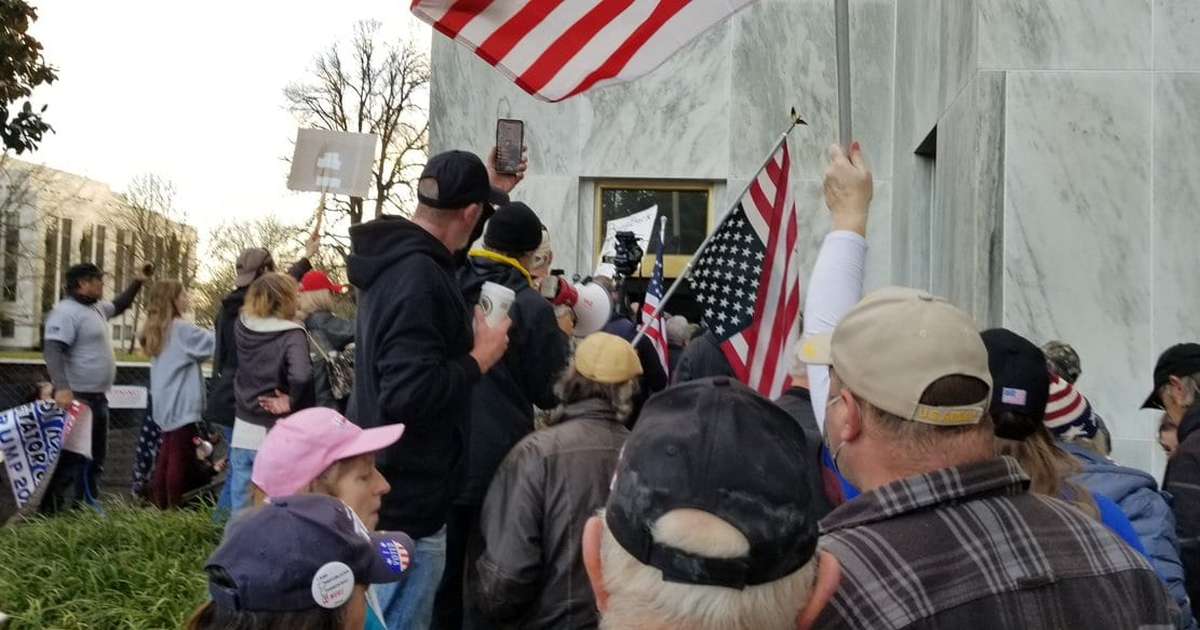 During a special session of the Oregon legislature called by Democrat Gov. Kate Brown, protesters descended on the building to attempt to enter. Several police agencies responded with officers in riot gear, MRAPs, and pepper spray to enforce the governor’s order to close the building due to concerns about the Wuhan CCP coronavirus pandemic. Patriot groups organized a gathering to protest the continued draconian lockdowns across the state, as well as the unconstitutional legislative session that excluded public oversight.


State Rep. Werner Reschke (R-Klamath Falls) tweeted that keeping the people of Oregon out of the session violates the state constitution:

While we are IN SESSION, the Capitol building is closed to the public, AND now the streets are also blocked off.

Multiple witnesses reported the police force included Oregon State Police, several county sheriff’s deputies, and the Salem Police Bureau. This kind of riot line and equipment deployment seemed to be utterly missing from riots caused by antifa and Black Lives Matter throughout 2020 in multiple cities across Oregon. Yet when the people of Oregon try to exercise their constitutional rights to watch in person as their representatives do the business of the people, however, an army of police came out.

The Capitol was out of control today. Old people and women assaulted by OSP. I am waiting on a call back from an internal affairs official. Nature abhors a void, there was no leadership. Sen. Dallas Heard was shouted down, by then the group was too far gone. I left before 10:15. The OSP was out of control at that time. I got pepper sprayed. It was bad. This is not the Tea Party. I think we are seeing something much scarier. OSP….Kate’s goons. I left when they called it a “riot”. Why is the bigger question. People do not think they have a voice in the process, Oregon’s tyrant government doesn’t believe we have a voice.

Aside from dozens of police officers from the Salem Police Department and the Oregon State Police, lawmakers, some staff and reporters were the only ones permitted inside the building on Monday, causing an uproar among protestors, who wanted to be let inside.

After an hour or so of confrontations and standoffs on the northwest side of the Capitol, police made at least two arrests.

Protestors used some type of spray and police responded by using pepper balls, according to Lt. Teven Upkes of Salem Police.

“At one point we used pepper balls. I don’t know what else,” he said. “When people attempted to come in to the building they actually used pepper spray and other things on officers. In return we used those to separate ourselves and get them to hold that spot. So I don’t know what all was used but I know at least pepper ball was used. “There may have been other chemical munitions used by the crowd as well on us that seemed to have acted similar to …a CS gas.”

At one point, State Sen. Shemia Fagan, D-Portland – who will be sworn in as Secretary of State come January – passed through the hallway a short distance away from where protestors were confronting police.

The Oregon Legislature is meeting in special session today to consider extending the state’s emergency eviction moratorium and provide funds to tenants and landlords.

State Sen. Dallas Heard (R-Roseburg) spoke to the crowd outside, expressing frustration with the statewide mask mandate and restrictions meant to slow the spread of the coronavirus.

Protesters gathered outside the building and, at one point, made their way inside to an entrance space.

Oregon State Police officials declared the gathering an unlawful assembly and issued commands over a loudspeaker for those gathered to disperse at about 9:20 a.m.

This is Oregon State Capitol Patriots were locked out of their house
Violence against these people was committed. pic.twitter.com/8GrpUqbpN2

Is this the enemy? pic.twitter.com/Yv6Or7Kj9p

Well I’m at the Capitol getting ready for the Third Special Session of the 2020 Legislature. I just noticed out my window where “the public can watch”. A pop up cover over a tv. There is nothing we will do today that can’t wait until regular session in January and to keep the public out…. well it’s just wrong. I’m sorry. I wish I were in charge.

Police at Oregon’s statehouse have been clashing with right-wing protesters angry about coronavirus restrictions.

An unlawful assembly is declared as Oregon patriots try to force their way into the State Capitol in Salem.

I’m proud to see Oregonians fighting back against the tyranny of @OregonGovBrown‘s unconstitutional policies.

Well this is unprecedented in my service here. I don’t have any first hand knowledge about what is going on. But that’s a whole lot of police in the rotunda. And now I’m recovering from tear gas fumes that have seeped into the building. 2020 can’t end soon enough.

One person commented on the post, “I was there. We are peaceful we want to watch the session..the rep from Beaverton leaned out his window and laughed at us.”

Another commented, “It just your average citizens who want to have their rights which include being in the Capitol building during session. Is that too much to ask? One group can vandalize the entire front of the building but now law-abiding citizens cannot??? Where is the knowledge of our Constitution?”


Tensions flared all day long. After addressing the crowd outside, Sen. Heard protested on the floor of the legislature by removing his mask, causing a verbal confrontation with the Senate president:

Sen. Dallas Heard removed his mask in protest shortly after the Oregon State Senate convened for the third special session of 2020, resulting in a verbal squabble with Senate President Peter Courtney.

Heard, a Republican representing Roseburg, was called upon for remonstrances shortly after the Senate convened at 8 a.m. Like other Republican lawmakers in the House and Senate, Heard voiced his concern over legislative COVID-19 rules requiring masks in the Capitol and banning the public from the chambers during the session.

“This is yet another illegitimate session in which you, the democratic majority, have declared the people unfit to participate in person in their own Capitol building,” he said. “Let the record reflect that I am in fierce opposition to any legislation that this illegitimate assembly may pass today. You will be held accountable for this in the coming years.”

“I declare my right to protest against your false authority and remove my mask,” he said as he took off his mask. “I will stand here for 30 seconds while you decide if you are fascists willing to use the government to force and override my rights or to prove that you are nothing more than bullies and false authorities.”

Heard stood in silence for several seconds before Courtney called for the next item on the agenda. The two then spoke over each other until Courtney asked for Heard’s microphone to be turned off. Heard did not vote on the next motion before the Senate was called to recess.


Remember, police stood down and allowed antifa and Black Lives Matter to riot, vandalize, and cause damage multiple times this year at the Capitol. When self-ascribed patriots come out to exercise their lawful rights, here come the MRAPs and riot police.

Is this the new normal in America?

Jeff Reynolds is the author of the book, “Behind the Curtain: Inside the Network of Progressive Billionaires and Their Campaign to Undermine Democracy,” available at www.WhoOwnsTheDems.com. Jeff hosts a podcast at anchor.fm/BehindTheCurtain. You can follow him on Twitter @ChargerJeff, and on Parler at @RealJeffReynolds.