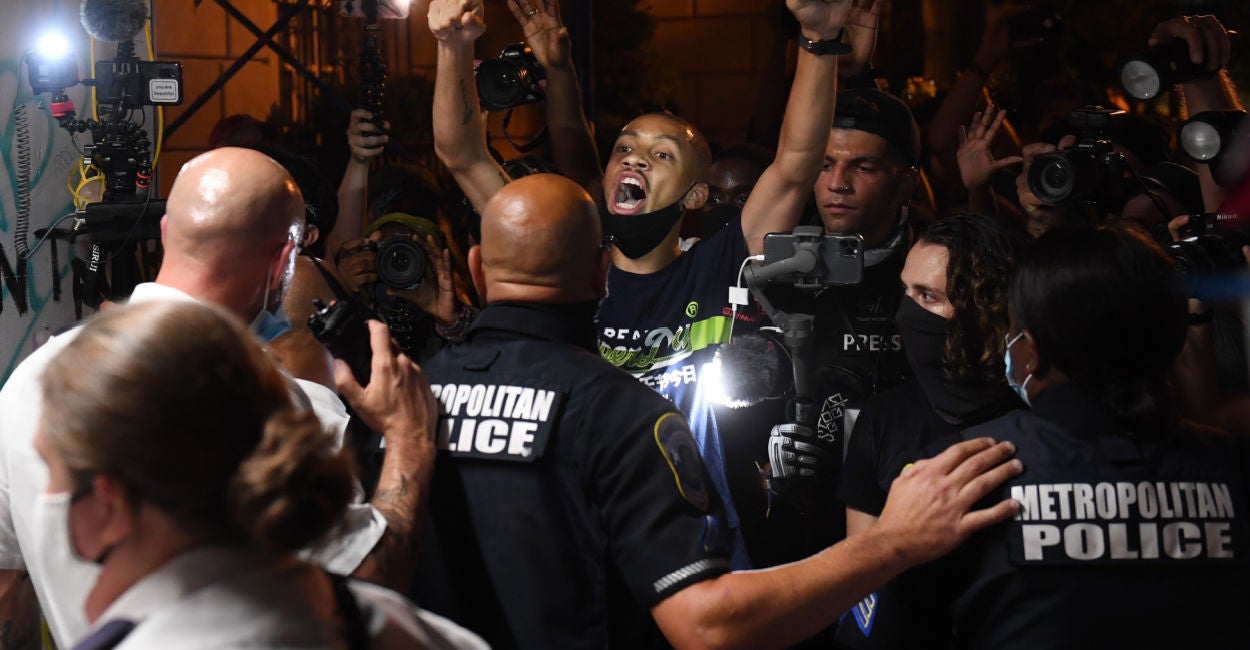 I met some protesters face to face on Thursday night and I am here to tell you this: They were not good people–and calling them “protesters” is a slur on lawful protest.

I was walking from the White House to my hotel behind an elderly couple. People were milling about the street, yelling obscenities at the police and Secret Service officers standing behind the fence, but our hotels were just across the street and down the block.

So, we passed through the gate to cross the street–and ran into a gauntlet of hate.

Two people first rushed to within inches of me, screaming obscenities in (and on!) my face. I held my fingers up in a peace sign, proceeding without pushing them out of my way, steeling myself for a blow and considering if and when I would need to fight.

My peace sign actually attracted more people to me, screaming vilely, as I said, “Settle down, settle down!” The elderly woman in front of me fell to the ground. Screaming people swirled around her as she knelt on the street; her husband bent down to help her up.

I stepped behind her and stretched out my arms, trying to create space for her to get up and move on. I backed across the street a few more steps trying to keep my eyes on the people threatening me, but they were moving all around me.

So, I turned and finished crossing the street, waiting for a blow, seeking to convey dignity, mentally preparing to respond. A few steps further and we encountered some police officers; more came, and they set up a protective cordon to restrain, but not arrest, the criminals.

Separately, a friend helped another elderly couple through a similar assault: The elderly woman dropped her earring and was too frightened to pick it up, until my friend stepped in to assist them. A Chicago police officer in town for the event, she said it was the first time she felt like a civilian relying on police.

Sen. Rand Paul, R-Ky., would later thank the Washington police for saving him from this same “mob.”

There are a thousand similar crime stories this morning. And yes, the people we encountered were criminals: Assault is a crime in every state and municipality. At a minimum, they violated section 22-404 of the D.C. Criminal Code, the penalty for which is imprisonment for up to 180 days.

Assault is an overt act that is intended to, and does, cause an apprehension of harmful or offensive contact in the victim. Assault is a crime distinct from battery. However, assault can lead to retribution or worse crimes (like battery, theft, arson, and murder), and unprosecuted assault desensitizes people to the humanity of others.

This was not the first rodeo for the hate-filled people engulfing us–consider their inhumane preying on the elderly. They maneuvered in a practiced, agreed-upon manner, co-conspirators in a plan to cause mayhem and provoke a response–including the amateur videographers who stayed a step or two back filming as we struggled through the gauntlet.

They are criminal gangs that have done and will do even worse things until they fear the consequences of their actions.

Most protesters in America are peace-loving and do not wish to inflict harm. I met some gathering in D.C. for a rally commemorating Martin Luther King’s epic “I have a dream” speech. And, as I left Washington on Friday morning, I saw families with young kids in tow, streaming across 15th Street at the Mall as they made their way to the Lincoln Memorial.

We need to be more discerning about what’s happening in our cities: Not all protests or protesters are the same. Criminals acting and hiding under the umbrella of “peaceful” protests need to be arrested and prosecuted in accordance with the law.

We need to stop ignoring criminal behavior that desensitizes an entire generation to violence and the humanity of others. The virtue of law-abiding protesters does not absolve the criminals among them or excuse their crimes.

Assault is a crime everywhere in America because it’s fundamental: We are not civilized if some are free to terrorize others at will. All Americans of good faith stand together with peaceful protesters seeking to eradicate racism and heal our nation’s divisions.

And towards that end, police, prosecutors, and those protesters should together adopt a “zero tolerance” approach to the marauding bands terrorizing our cities and dehumanizing others.

Delightful Cuomo Comeuppance
How Long Before the West Gives Up Trying to Negotiate a New Nuclear Deal With Iran?
Easy Ways to Cut the Cost to Heat Your Home This Winter
WATCH: Tucker Carlson Hilariously Lampoons ‘Tiny Hothouse’ CNN Suspending Fredo
Anthony Fauci: I Am the Science