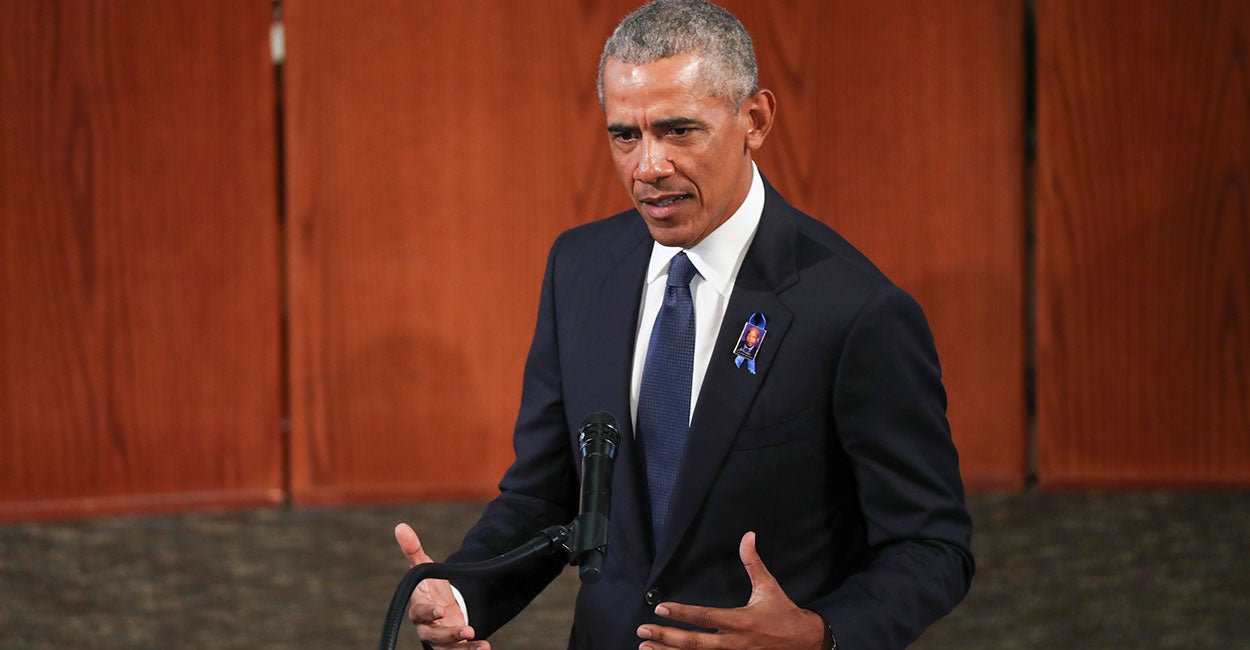 Democrats are looking again at eliminating the filibuster so that they can pass legislation in the Senate without difficulty if they retake the majority, and they gained an ally this week in former President Barack Obama.

Obama said during a politically charged eulogy Thursday at the Atlanta funeral service for Rep. John Lewis, D-Ga., that it may be necessary to do away with the filibuster and inaccurately called the procedure a “Jim Crow relic.”

First, Obama called for legislation giving voting representation in Congress to the District of Columbia and Puerto Rico, making Election Day a federal holiday, and guaranteeing that all Americans automatically are registered to vote, Politico and other news outlets reported.

“And if all this takes eliminating the filibuster, another Jim Crow relic, in order to secure the God-given rights of every American, then that’s what we should do,”  Obama said.

The filibuster as a potential tactic to block a Senate vote actually dates to 1806, not to the so-called Jim Crow laws that, beginning in the late 19th century, denied equal rights to blacks in the South.

The first Senate filibuster actually occurred in 1837, although segregationist Democrats did use it to block passage of civil rights laws in the 1950s and early 1960s.

“Job number one is for us to get the majority,” Schumer told reporters last week. “We don’t take anything for granted, but it’s looking better and better. Once we get the majority, we’ll discuss it in our caucus. Nothing’s off the table.”

On Friday, former Louisiana Gov. Bobby Jindal, a Republican, called out Obama for saying the filibuster should be put aside.

“[email protected] tried to use filibuster to stop [Samuel] Alito nomination [to the Supreme Court] in ’06; 60 senators opposed @realDonaldTrump effort to remove filibuster in 2017,” Jindal tweeted. “Obama now says filibuster a ‘Jim Crow relic.’ Dems should stop pretending they are fighting for principles, and admit it’s about power.”

Currently, three-fifths, or 60, of the 100 senators, can “invoke cloture,” bypass a filibuster, and proceed to a vote, but Democrats again are looking at abolishing the practice.

“President Obama is absolutely right,” Sanders tweeted. “It is an outrage that modern-day poll taxes, gerrymandering, I.D. requirements, and other forms of voter suppression still exist today. If expanding the Voting Rights Act requires us to eliminate the filibuster, then that is what we must do.”

Eliminating the filibuster and allowing the nuclear option would let Democrats pass legislation with just 51 votes rather than needing 60 to advance to a floor vote.

Not every Democrat is signing off on eliminating the filibuster, however.

“I have never supported a repeal of the filibuster and I don’t support one now,” Sen. Joe Manchin, D-W.V., tweeted. “I am willing to consider solutions that promote collaboration so the Senate is able to be a productive body again. But repealing the filibuster would result in even more partisanship.”

Republicans, who currently control the Senate with 53 seats, aren’t taking kindly to the idea.

“It is all about power, folks, not for the good of the country: Joe Biden says Democrats will kill the 60-vote barrier if Senate Republicans are too ‘obstreperous,’” Sen. John Cornyn, R-Texas, tweeted July 17.

Tom Jipping, deputy director of The Heritage Foundation’s Edwin Meese III Center for Legal and Judicial Studies, told The Daily Signal in an email that Democrats already went too far in 2013, when they eliminated the filibuster for a majority of presidential nominees.

“Senate Democrats showed in 2013 how reckless they are willing to be when they think rigging the Senate’s rules will lead to short-term political gain,” Jipping said.

“Abandoning the legislative filibuster, the Senate’s most distinctive feature for more than 200 years, would do even greater damage and upset the balance that America’s founders struck when they designed our system of government.”